Ieremia Tienang Tabai GCMG AO (modern spelling: Tabwai; born 16 December 1949) is an I-Kiribati politician who served as the first Beretitenti President of the Republic of Kiribati, after being the youngest ever Chief minister of the Commonwealth of Nations, from 15 March 1972, and then becoming the youngest ever head of State. During his presidency, he was described as being the most able leader of the Pacific island states. [1]

In 1976, the Gilbert Islands, now separated from Tuvalu a few months earlier, received self-government, and Tabai served as leader of the Opposition in a Westminster system dominated less by formal political parties than by loose coalitions of like-minded members. In this position, he regularly expressed criticism of the perceived centralist tendencies of Chief minister Naboua Ratieta's government, expressing particular distaste for Ratieta's plans for an expensive defence department and the westernisation he was bringing to Kiribati. He fought in favor of traditional Gilbertese culture, helped to publicise the complaints of village copra growers, and criticized what he saw as a disproportionate amount of government expenditure on Tarawa over the other islands. [2] Tabai became elected Chief Minister on March 1978, aged only 27, the youngest ever in the Commonwealth of Nations. [3]

He demonstrated a talent for negotiation when he led his government in discussions with the United Kingdom over a financial settlement regarding the demands of the Banabans for compensation for the loss of their ancestral homeland of Banaba (Ocean Island), which had been devastated by phosphate mining, and their demands that it become independent of Kiribati. [2] In 1979 Tabai was made a Companion of the Order of St Michael and St George (CMG) by Queen Elizabeth II, and became Beretitenti of the Republic of Kiribati at independence on 12 July 1979. He served not only as the last Chief Minister before independence, and he became Beretitenti by force of law — from 1979 until 1982, then from 1983 until 1991, with a short interruption from 1982 until 1983, serving the maximum number of terms allowed by law. He was first elected to the office of Beretitenti on April 1982, but he lost a vote of no confidence in December 1982, so he was then replaced by an acting President until his re-election in February 1983. His third and last term, from 1987 to 1991, has been subject to legal issue, because the Constitution of Kiribati limits to a maximum of 3 terms, but the High Court rejected the case for procedural reasons.

In 1982, he received an honorary knighthood from the Queen - Knight Grand Cross of the Order of St Michael and St George (GCMG). [2]

Tabai was a member of the National Progressive Party. As Beretitenti, he displayed a strong aversion to being dependent on aid, saying at one point the people were "better poor but free". [1] During his administration, he signed a deal for tuna with fishing authorities from the Soviet Union. The Soviets chose not to renew the deal, saying that the catch they gathered was not worth the licensing fee Tabai demanded. [1] Under his administration, the government also placed its earnings from phosphate mining in a trust fund. The interest from the fund had been used to pay for development projects. [1]

After retiring from politics, Tabai served as Secretary-General of the Pacific Islands Forum from 1992 until 1998.

In May 1996 he was appointed an Honorary Officer of the Order of Australia, "for service to Australian-Pacific Islands countries relations, particularly as Secretary-General to the South Pacific Forum". [4]

In 1999 he was fined for trying to establish an independent radio station in Kiribati, which he described as "censorship". [5] In 2000, he founded a newspaper, The Kiribati Newstar. [2]

Tabai returned to politics and was re-elected to the Kiribati parliament, again representing Nonouti, in 2007. [6] He retained his seat in the 2011, the 2015-16, and the 2020 elections. He is aligned with the Boutokaan te Koaua party, then Boutokaan Kiribati Moa Party.

He also serves as a secretary for Pacific Magazine.[ citation needed ]

Kiribati, officially the Republic of Kiribati, is an independent island nation in the central Pacific Ocean. The permanent population is over 119,000 (2020), more than half of whom live on Tarawa atoll. The state comprises 32 atolls and one raised coral island, Banaba. They have a total land area of 811 square kilometres and are dispersed over 3.5 million km2 (1.4 million sq mi).

The islands which now form the Republic of Kiribati have been inhabited for at least seven hundred years, and possibly much longer. The initial Austronesian peoples’ population, which remains the overwhelming majority today, was visited by Polynesian and Melanesian invaders before the first European sailors visited the islands in the 17th century. For much of the subsequent period, the main island chain, the Gilbert Islands, was ruled as part of the British Empire. The country gained its independence in 1979 and has since been known as Kiribati.

Politics of Kiribati takes place in a framework of a parliamentary representative democratic republic, whereby the Beretitenti, President of Kiribati, is both the head of state and head of government, and of a multi-party system. Executive power is exercised by the government, Beretitenti and his cabinet, all MPs. Legislative power is exercised by the House of Assembly. The judiciary is independent of the executive and the legislature. The Constitution, promulgated at independence on 12 July 1979, establishes the Republic of Kiribati as a sovereign democratic republic and guarantees the fundamental rights of its citizens and residents. 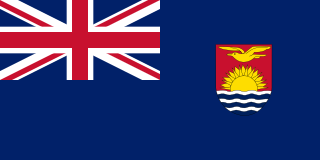 The Gilbert and Ellice Islands in the Pacific Ocean were part of the British Empire from 1892 to 1976. They were a protectorate from 1892 to 12 January 1916, and then a colony until 1 January 1976. The history of the colony was mainly characterized by phosphate mining on Ocean Island. In October 1975, these islands were divided by force of law into two separate colonies, and they became independent nations shortly thereafter: The Ellice Islands became Tuvalu in 1978, and the Gilbert Islands became part of Kiribati in 1979.

The Right Honourable Sir Toaripi Lauti was a Tuvaluan politician who served as chief minister of the Colony of Tuvalu (1975–78), as the first prime minister following Tuvalu's independence (1978–1981) and governor-general of Tuvalu (1990–1993). He was married to Sualua Tui.

Teatao Teannaki was an I-Kiribati political figure who served as President of Kiribati from 1991 until 1994.

Sir Tomu Malaefone Sione was a political figure from the Pacific nation of Tuvalu. He worked as a journalist from 1962–68. He was the head of the southern Niutao clan. He was married to Segali.

Nonouti is an atoll and district of Kiribati. The atoll is located in the South Gilbert Islands, 38 km north of Tabiteuea, and 250 km south of Tarawa. The atoll is the third largest in the Gilbert Islands and is the island where the Catholic religion was first established in Kiribati, in 1888.

Parliamentary elections were held in the Gilbert Islands on 1 February 1978, with a second round on 6 February.

Early parliamentary elections were held in Kiribati on 12 January 1983, with a second round on 19 January. All candidates for the 36 seats ran as independents. Voter turnout was 79.9%.

Taomati T. Iuta was an I-Kiribati politician. He was Speaker of the House of Assembly of Kiribati for the Ninth Parliament (2011–2015). He was Vice President of Kiribati from 1991 to 1994.

General elections were held in the Gilbert and Ellice Islands on 4 April 1974. All candidates ran as independents.

General elections were held in the Gilbert and Ellice Islands in 1967. All candidates ran as independents.

Bwebwetake Areieta was an I-Kiribati politician. He served as a member of the Legislative Council and House of Assembly from 1971 until his death, also holding the posts of Member for Social Services and Minister of Communications, Works and Utilities during the 1970s. 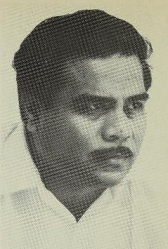 Ratimiti Babera Kirata (1938-1991) was an I-Kiribati politician, elected in the House of Representatives in 1967 for the constituency of Onotoa. He was nominated candidate to the 1978 Gilbertese Chief Minister election. He was born in Onotoa where he was continuously elected MP from 1978 to his death, dying less than one month before the general election of May 1991. He was at that moment one of the possible candidates to the succession of Ieremia Tabai as the Beretitenti. He was one of the founders and the first president of the Gilbertese National Party and later of the National Progressive Party (Kiribati). He had been continuously member of the Cabinet of Kiribati from 1979 to 1991.