His work in film and television include composing theme songs for shows such as Problem Areas w Wyatt Cenac , Hawthorne , The Break with Michelle Wolf , contributing music to the TV shows The Chappelle Show , Black-ish and the movies Fame , Dave Chappelle's Block Party , and Totally Awesome among many others.

Poyser received a Grammy for Best R&B Song in 2003 for co-writing/producing Erykah Badu and Common's hit "Love of My Life." [5] He was also the executive producer on Badu's highly celebrated albums, Mama's Gun and Worldwide Underground. He also received 2 Grammys, including Best R&B album, for producing John Legend's Wake Up! album in 2010.

A collaborator with the band dating back to Things Fall Apart , Poyser officially joined The Roots in 2009, composing and performing live as the house band for NBC's Late Show with Jimmy Fallon , and subsequently The Tonight Show Starring Jimmy Fallon . He is sometimes used as comic foil, especially for his use of deadpan facial expressions, and is frequently used as the pianist for Fallon's "thank-you notes" after the monologue ends. Poyser also tours with the band and regularly performs at the band's live shows.

Fugees was an American hip hop group who rose to fame in the mid-1990s. Their repertoire included elements of hip hop, soul and Caribbean music, particularly reggae. The members of the group were Wyclef Jean, Lauryn Hill, and Pras Michel. Deriving their name from a shortening of the word "refugees", Jean and Michel are Haitian while Hill is American. 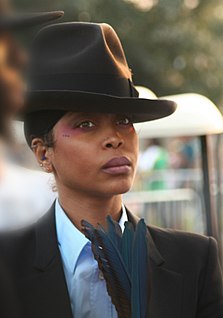 Erica Abi Wright, known professionally as Erykah Badu, is an American singer-songwriter, record producer and actress. Badu's career began after opening a show for D'Angelo in 1994 in Fort Worth; record label executive Kedar Massenburg was highly impressed with her performance and signed her to Kedar Entertainment. Her first album, Baduizm, was released in February 1997. It spawned three singles: "On & On", "Next Lifetime" and "Otherside of the Game". The album was certified triple Platinum by the Recording Industry Association of America (RIAA). Her first live album, Live, was released in November 1997 and was certified double Platinum by the RIAA.

The 45th Annual Grammy Awards were held on February 23, 2003 at Madison Square Garden in New York City. Musicians accomplishments from the previous year were recognized. Norah Jones and her song "Don't Know Why" were the main recipients of the night, garnering six Grammys, including four major awards: Record of the Year, Album of the Year, Song of the Year and Best New Artist, plus Best Female Pop Vocal Performance and Best Pop Vocal Album. Songwriter Jesse Harris received the Song of the Year award for his work on "Don't Know Why." Simon and Garfunkel reunited to open the show performing "The Sound of Silence".

The 41st Annual Grammy Awards were held on February 24, 1999, at Shrine Auditorium, Los Angeles. They recognized accomplishments by musicians from the year 1998. Lauryn Hill was the main recipient, winning a total of 5 awards including Album of the Year and Best New Artist. Her album was the first hip hop act ever to win the coveted award. The ceremony was known as the "Grammy Year of Women", because every artist nominated for Album of the Year was female. Madonna won four awards and opened the show with her performance of "Nothing Really Matters" while musicians the Dixie Chicks, Vince Gill, Alanis Morissette and Shania Twain won two apiece. Celine Dion also received two awards both for "My Heart Will Go On", which received a total of four awards. It is widely remembered for Ricky Martin's performance of "La Copa De La Vida"/ "The Cup of Life". 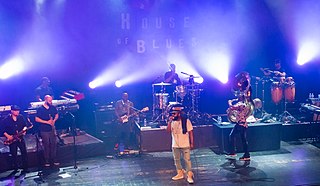 The Roots are an American hip hop band, formed in 1987 by Tariq "Black Thought" Trotter and Ahmir "Questlove" Thompson in Philadelphia, Pennsylvania, United States. The Roots serve as the house band on NBC's The Tonight Show Starring Jimmy Fallon, having served in the same role on Late Night with Jimmy Fallon from 2009 to 2014.

Neo soul is a genre of popular music. The term was coined by music industry entrepreneur Kedar Massenburg during the late 1990s to market and describe a style of music that emerged from soul and contemporary R&B. Heavily based in soul music, neo soul is distinguished by a less conventional sound than its contemporary R&B counterpart, with incorporated elements ranging from funk, jazz fusion, hip hop, and African music to pop, rock, and electronic music. It has been noted by music writers for its traditional R&B influences, conscious-driven lyrics, and strong female presence. 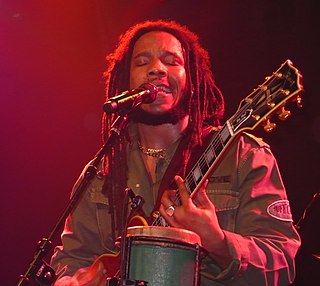 Stephen Robert Nesta "Raggamuffin" Marley is a Jamaican-American musician who is the son of Bob Marley and his wife Rita Marley. Stephen is an eight-time Grammy Award winner, three times as a solo artist, twice as a producer of younger brother Damian Marley's Halfway Tree and Welcome to Jamrock albums, and a further three times as a member of his older brother Ziggy Marley's group Ziggy Marley & The Melody Makers. 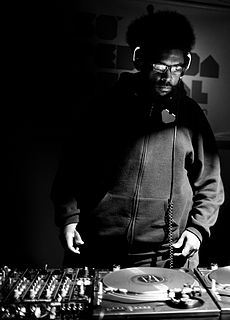 Ahmir Khalib Thompson, known professionally as Questlove, is an American musician and music journalist. He is the drummer and joint frontman for the hip hop band, the Roots. The Roots has been serving as the in-house band for The Tonight Show Starring Jimmy Fallon since February 17, 2014. Questlove is also one of the producers of the cast album of the Broadway musical Hamilton. He is the co-founder of the websites Okayplayer and OkayAfrica. Additionally, he is an adjunct instructor at the Clive Davis Institute of Recorded Music at New York University. 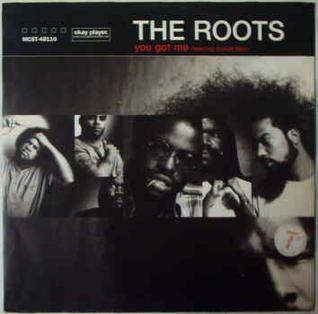 "You Got Me" is a song by the hip hop band The Roots, featuring vocals by Erykah Badu and Eve, then known as Eve of Destruction, who raps the second verse but does not appear in the music video. The track was released as a single from the band's fourth studio album, Things Fall Apart (1999). 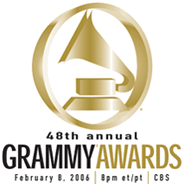 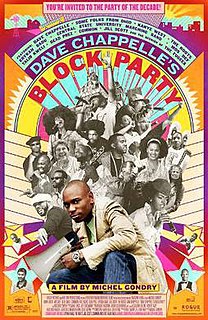 The Soulquarians were a neo soul and alternative hip hop-informed musical collective. The collective, formed during the late 1990s, continued into the early 2000s, and produced several well-received albums. Prior to its formation, members Common, Talib Kweli, Mos Def, and Q-Tip were members of the Native Tongues collective. 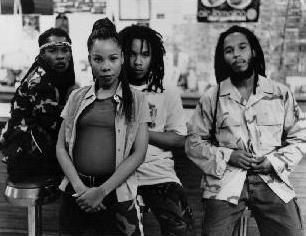 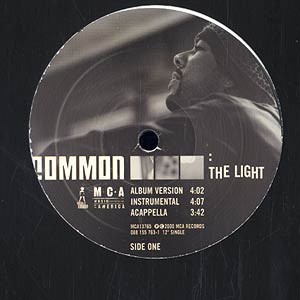 "The Light" is the Grammy-nominated second single from Common's 2000 album Like Water for Chocolate. It was produced by Jay Dee and features keyboards performed by James Poyser. It samples "Open Your Eyes" as performed by Bobby Caldwell and the drums from "You're Gettin' a Little Too Smart" by The Detroit Emeralds. Framed as a love letter, it is a confession of Common's love for a woman – specifically, his girlfriend at the time, Erykah Badu. Cynthia Fuchs of PopMatters describes it as a "charming, tender, and undeniably soulful declaration of affection and respect." A music video features Common, Erykah Badu and "recognizable sensual delights" including "a homemade Minnie Ripperton cassette, a mango, a pink lava lamp [and] a deeply green water-beaded leaf." 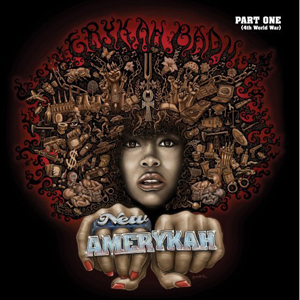 New Amerykah Part One is the fourth studio album by American R&B singer and songwriter Erykah Badu. It was released on February 26, 2008, by Universal Motown. 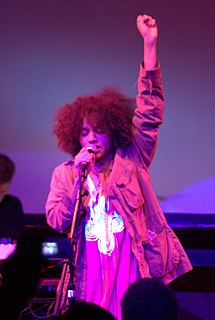 Nneka Egbuna is a Nigerian singer, songwriter and actress. She sings in English, Igbo and Nigerian Pidgin. 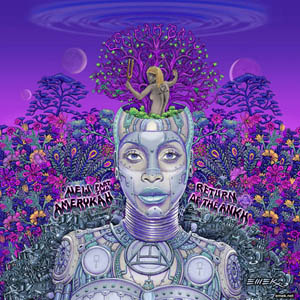 New Amerykah Part Two is the fifth studio album by American recording artist Erykah Badu, first released on March 30, 2010, through Universal Motown. Collaborating with several hip hop producers over the Internet, Badu conceived 75 songs set to be split over three albums with New Amerykah Part One (2008) being the first. The album was recorded primarily at Electric Lady Studios in New York City.

The Summer Tour is a concert tour in 2006 by American R&B singer Erykah Badu. The tour started on June 10, in Knoxville, Tennessee with three shows in North America and several shows through the summer in Europe and a second outing in North America. Badu co-headlined dates in August with Jill Scott and Queen Latifah for their "Sugar Water Tour". 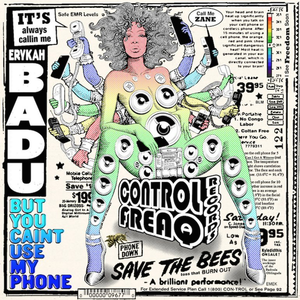 But You Caint Use My Phone is a mixtape by American singer Erykah Badu. It was released on November 27, 2015, by Motown and Control Freaq. Following the release of New Amerykah Part Two (2010), Badu embarked on a five-year hiatus, during which she traveled to Africa in an attempt to record new music, though this never surfaced. After receiving a remix of "Bag Lady" from producer Zach Witness, Badu contacted him in order to record with him. Shortly thereafter, the pair met again and went to Witness's home in Dallas, Texas, and worked in his bedroom studio, where they recorded the album in 11 days. The mixtape features appearances from rapper ItsRoutine and André 3000.