John LeBoutillier (born May 26, 1953) is an American political columnist, pundit, and former Republican member of the United States House of Representatives from New York, serving a single two-year term.

LeBoutillier first rose to national prominence in 1974. While still a college student at Harvard, he raised over a quarter million dollars for the campaign of former Vietnam War prisoner of war Leo K. Thorsness, a South Dakota Republican campaigning to unseat liberal senator George McGovern. [2] As a result, LeBoutillier has been an activist on POW/MIA issues ever since.

LeBoutillier's efforts on behalf of Thorsness caught the attention of President Ford's re-election campaign and in 1976 he was appointed regional coordinator, responsible for all field activities in New Jersey. [2]

LeBoutillier was elected to Congress in 1980, representing New York's 6th District. He defeated 16-year incumbent Lester L. Wolff to become the youngest member of the 97th Congress. [3] He served on the House Foreign Affairs Committee and as a member of Special House POW/MIA Task Force. After redistricting in 1982, LeBoutillier ran unsuccessfully for re-election versus Robert J. Mrazek in New York's 3rd congressional district. In 1983, LeBoutillier was fined $7,000 by the Federal Election Commission for violating federal election laws during the course of his 1980 congressional campaign. With contributions by individuals limited to $1,000 per person, LeBoutillier accepted a $200,500 contribution from his mother. LeBoutillier's mother was also fined $7,000. [4]

Upon leaving Congress, LeBoutillier continued to be active on the Vietnam War POW/MIA issue. He founded the Sky Hook II Project, dedicated to recovering living American POWs in Southeast Asia. He has made frequent trips to Laos and Vietnam and also met with Lao and Vietnamese leaders in Hanoi, Ho Chi Minh City, Jakarta, New York City, Vientiane, and Paris.

LeBoutillier was a frequent guest on radio and television and had hosted radio talk show programs on WMCA radio and WABC radio. He conducted an exclusive television interview with Aleksandr Solzhenitsyn for NBC's Tomorrow Show in 1981, and interviewed Richard Nixon for ABC Radio in 1984. The interview was Nixon's first live network radio appearance since leaving the White House. He has been a frequent guest commentator on The Today Show , 20/20 , Nightline , Crossfire , and Imus in the Morning . [2] In 2004, he appeared on The Daily Show with Jon Stewart to discuss his plans to build a "Counter-Clinton Library" in Little Rock near the Clinton Presidential Library. [5]

He joined with noted Canadian broadcaster Arlene Bynon in December 2010, to launch Bynon/LeBoutillier, a talk radio show simultaneously airing on WABC in New York City and AM640 in Toronto while also airing in the United Kingdom. [6]

In January 2021, LeBoutillier signed a letter calling on Republicans to impeach President Donald Trump after the 2021 storming of the United States Capitol. [7] [8]

LeBoutillier has written several books, most notably the 1978 best-seller Harvard Hates America, a work similar in theme to William F. Buckley's 1950 God and Man at Yale . In 1989 he wrote Vietnam Now; The Case for Normalization and in 1979 co-authored a novel, Primary. He is the co-author, with Edward Klein, of The Obama Identity .

He has been a contributor to The New York Times , the New York Post and The Wall Street Journal , among others. [2]

LeBoutillier grew up on Long Island’s North Shore. His father was Thomas LeBoutillier, a member of a prominent family and onetime Grumman test pilot. [3] His mother, Pamela LeBoutillier (née Tower), was the daughter of Roderick Tower and Flora Payne Whitney, a member of the New York Whitneys who are, in turn, descendants of the Vanderbilt family. Mrs. LeBoutillier was a distant cousin of the late Senator John Tower of Texas. [9] LeBoutillier’s great great grandfather was William Collins Whitney, Secretary of the Navy under President Grover Cleveland. [3] Another great great grandfather was Charlemagne Tower. LeBoutillier is a great grandson of Gertrude Vanderbilt Whitney, founder of the Whitney Museum of American Art, and he is also a descendant of railroad tycoon Cornelius Vanderbilt.

He is a resident of Old Westbury, New York.

Nancy Elizabeth Lee Johnson is an American lobbyist and politician from the state of Connecticut. Johnson was a Republican member of the United States House of Representatives from 1983 to 2007, representing the 6th district and later the 5th District after reapportionment.

Samuel Robert Johnson was an American politician who served as the U.S. Representative for Texas's 3rd congressional district in Congress from 1991 to 2019. He was a member of the Republican Party. In October and November 2015, he was the acting Chairman of the House Committee on Ways and Means, where he also served as chairman of the Social Security Subcommittee. 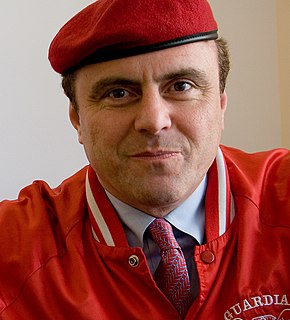 Curtis Sliwa is an American activist, founder and chief executive officer of the Guardian Angels, radio talk show host, and politician. Sliwa is the Republican nominee for the 2021 New York City mayoral election. 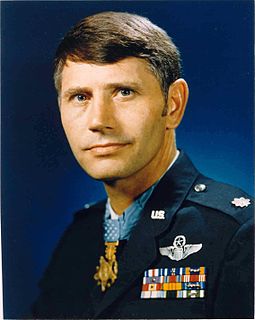 Leo Keith Thorsness was a colonel in the United States Air Force who received the Medal of Honor for his actions in the Vietnam War. He was awarded the medal for an air engagement on April 19, 1967. He was shot down two weeks later and spent almost six years in captivity in North Vietnam as a prisoner of war. After his military service, Thorsness served one term in the Washington State Senate. 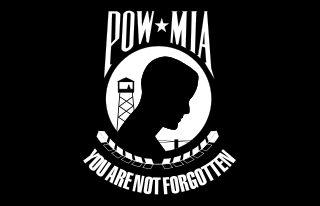 The National League of Families POW/MIA flag, also known as the POW/MIA flag or simply the POW flag, consists of a silhouette of a prisoner of war (POW) before a guard tower and barbed wire in white on a black field. "POW/MIA" appears above the silhouette and the words "You Are Not Forgotten" appear below in white of the black field.

The Senate Select Committee on POW/MIA Affairs was a special committee convened by the United States Senate during the George H. W. Bush administration to investigate the Vietnam War POW/MIA issue, that is, the fate of United States service personnel listed as missing in action during the Vietnam War. The committee was in existence from August 2, 1991 to January 2, 1993.

Flora Payne Whitney, also known as Flora Whitney Miller, was an American artist and socialite, art collector, and patron of the arts.

The Vietnam War POW/MIA issue concerns the fate of United States servicemen who were reported as missing in action (MIA) during the Vietnam War and associated theaters of operation in Southeast Asia. The term also refers to issues related to the treatment of affected family members by the governments involved in these conflicts. Following the Paris Peace Accords of 1973, 591 U.S. prisoners of war (POWs) were returned during Operation Homecoming. The United States listed about 2,500 Americans as prisoners of war or missing in action but only 1,200 Americans were reported to have been killed in action with no body recovered. Many of these were airmen who were shot down over North Vietnam or Laos. Investigations of these incidents have involved determining whether the men involved survived being shot down. If they did not survive, then the U.S. government considered efforts to recover their remains. POW/MIA activists played a role in pushing the U.S. government to improve its efforts in resolving the fates of these missing service members. Progress in doing so was slow until the mid-1980s when relations between the United States and Vietnam began to improve and more cooperative efforts were undertaken. Normalization of the U.S. relations with Vietnam in the mid-1990s was a culmination of this process.

David Goncalves Valadao is an American politician and dairy farmer who is the U.S. Representative for California's 21st congressional district. In 2020, Valadao defeated TJ Cox to reclaim the seat he held from 2013 to 2019. Before being elected to Congress, he served one term in the California State Assembly, representing the 30th district. He is a member of the Republican Party. After the 2020 elections, Valadao, Michelle Steel, and Young Kim became the first Republican congressional candidates since 1994 to unseat incumbent House Democrats in California.

Arlene Bynon is a Canadian television and radio broadcaster, formerly an afternoon talk radio host on AM 640 in Toronto, Ontario. She has also cohosted an international talk radio show with American broadcaster John LeBoutillier.

Elise Marie Stefanik is an American businesswoman and politician serving as the U.S. representative for New York's 21st congressional district since 2015. As chair of the House Republican Conference since 2021, she is the third-ranking House Republican.

John Michael Katko is an American attorney and politician serving as the U.S. Representative for New York's 24th congressional district, based in Syracuse, since 2015. A member of the Republican Party, he previously was an Assistant United States Attorney who led the organized crime division at the U.S. Attorney's Office in Syracuse. In that role, he helped to prosecute gang members under the Racketeer Influenced and Corrupt Organizations Act. In the 116th Congress, he was a co-chair of the House moderate Republican faction, the Tuesday Group. He is the sole chair of the renamed Republican Governance Group for the 117th Congress.

Joshua S. Gottheimer is an American attorney, writer, and public policy adviser who has served as the U.S. Representative for New Jersey's 5th congressional district since 2017. The district includes a swath of suburban and rural territory west of New York City. 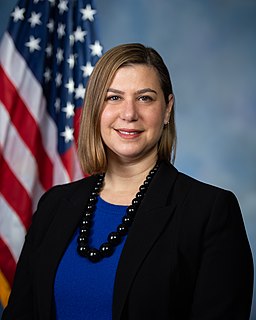 Elissa Blair Slotkin is an American politician serving as the U.S. Representative for Michigan's 8th congressional district since 2019. A member of the Democratic Party, she previously served as a Central Intelligence Agency (CIA) analyst and Department of Defense official. Her district is based in Lansing, and stretches into the outer northern and western suburbs of Detroit. 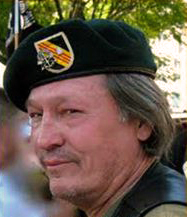 Theodore Lane Sampley was an American Vietnam War veteran and activist. He primarily advocated for those servicemembers still considered missing in action or prisoners of war (POW-MIA) as of the end of hostilities in 1975. A staunch political conservative, he also ran for local political office several times. He is credited with the research that identified Air Force Lt. Michael Blassie as the Vietnam fatality buried at the Tomb of the Unknown Soldier, and for his role in organizing the annual Rolling Thunder motorcycle event in Washington. In Kinston, North Carolina, where he lived for much of his adult life, he was known for his local civic activism, most notably his effort to build a replica of the Confederate ironclad CSS Neuse, the only full-size replica of a Confederate ironclad, in the city's downtown.

Peter James Meijer is an American politician and business analyst serving as the U.S. Representative for Michigan's 3rd congressional district since 2021. He is a member of the Republican Party. He is a member of the Meijer family, the owners of the Meijer superstore chain. Meijer was one of ten Republicans who voted to impeach Donald Trump during Trump's second impeachment.