The Kakadu Highway is 209 kilometres long and extends from Pine Creek to Jabiru, entering Kakadu National Park as the highway crosses the Mary River. [1] The highway is signed and mapped as State Route 21. [2]

Kakadu National Park is a protected area in the Northern Territory of Australia, 171 km (106 mi) southeast of Darwin. It is a World Heritage Site.

Bowling Green Bay is a national park in the City of Townsville and Shire of Burdekin, Queensland, Australia, 1,103 km northwest of Brisbane, and 28 km south of Townsville and 59 km north of Ayr. It is a Ramsar Convention listed site. The park protects diverse range of habitats including the rugged, forested landscape surrounding Mount Elliot and Saddle Mountain as well as coastal estuaries between Cape Cleveland and Cape Bowling Green.

The Dawson Highway is a state highway in Queensland, Australia. It runs for 405 km between Gladstone and Springsure where it terminates. From Gladstone to Rolleston it is signed as State Route 60, and then A7 onwards to Springsure. It continues west for another 247 km as Dawson Developmental Road to Tambo on the Landsborough Highway. North of Springsure, A7 becomes the Gregory Highway.

The Gregory Highway is a state highway in Queensland that serves the major coal-mining centres of Central Queensland. The highway was named after Augustus Gregory, an early explorer.

The Barkly Highway is a national highway of both Queensland and the Northern Territory. 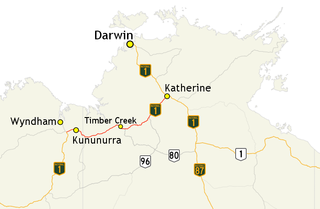 The Gore Highway is a highway running between Toowoomba and Goondiwindi in Queensland, Australia. Together with Goulburn Valley Highway and Newell Highway, it is a part of the National Highway's Melbourne-Brisbane link. It is signed as National Highway A39.

Pine Creek is a small town in the Katherine region of the Northern Territory, Australia. As at the 2016 Census there were 328 residents of Pine Creek, which is the fourth largest town between Darwin and Alice Springs.

The Arnhem Highway is a 227—kilometre highway in the Northern Territory of Australia. It links the mining town of Jabiru, in Kakadu National Park, to the Stuart Highway at a point 35 kilometres south of Darwin.

Jabiru is a town in the Northern Territory of Australia. It was originally built in 1982 as a closed town to house the community living at Jabiru East near the Ranger Uranium Mine 8 km (5.0 mi) away. Both the mine and the town are completely surrounded by Kakadu National Park. At the 2006 census, Jabiru had a population of 1,135.

The Isis Highway is a state highway in southern Queensland, Australia. The highway is relatively short, and runs for 135 kilometres (84 mi) in a north-east / south-west direction between the Burnett Highway at Ban Ban Springs and Bundaberg. The Isis Highway links the cattle farming districts of the North Burnett with the sugar producing Bundaberg and Fraser Coast regions.

The Twin Falls is a cascade waterfall on the South Alligator River that descends over the Arnhem Land escarpment within the UNESCO World Heritage–listed Kakadu National Park in the Northern Territory of Australia. In 1980, The Twin Falls area was listed on the now-defunct Register of the National Estate.

Ubirr is a rock formation within the East Alligator region of Kakadu National Park in the Northern Territory of Australia, and is known for its rock art. It consists of a group of rock outcrops on the edge of the Nadab floodplain where there are several natural shelters that have a collection of Aboriginal rock paintings, some of which are many thousands of years old. The art depicts certain creation ancestors as well as animals from the area such as barramundi, catfish, mullet, goannas, long-necked turtles, pig-nosed turtles, rock ringtail possums, and wallabies.

The Jim Jim Falls is a plunge waterfall on the Jim Jim Creek that descends over the Arnhem Land escarpment within the UNESCO World Heritage–listed Kakadu National Park in the Northern Territory of Australia. The Jim Jim Falls area is registered on the Australian National Heritage List. 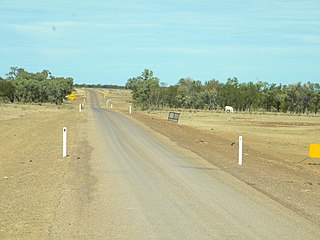 Duncan Road is a generally northeast-southwest former highway in the northeast of Western Australia and northwest of Northern Territory which links the Victoria Highway with Halls Creek. The road, approximately 443 kilometres (275 mi) in length, was designated as National Route 80 from its terminus at Halls Creek through to Nicholson. National Route 80 continued east into the Northern Territory along Buntine Highway, while Duncan Road snakes its way north, crossing the Western Australia / Northern Territory borders numerous times between Buntine Highway and Victoria Highway.

The Gunlom Falls, formerly Waterfall Creek Falls, is a cascading waterfall on the Waterfall Creek located in the Kakadu National Park in the Northern Territory, Australia. The falls are also known as UDP Falls and are perhaps most famous for making an appearance in the movie Crocodile Dundee.

The Diamantina Developmental Road is a gazetted road in Queensland, Australia. that runs from Charleville in the south-central part of the state to Mount Isa in the north-west.