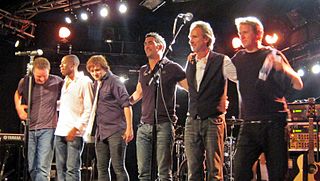 Mike and the Mechanics are an English rock supergroup formed in Dover in 1985 as a side project of Mike Rutherford, the bassist/guitarist and one of the founding members of the band Genesis. The band is known for their hit singles "Silent Running", "All I Need Is a Miracle", "Taken In", "The Living Years", "Word of Mouth" and "Over My Shoulder".

The Ivor Novello Awards, named after the entertainer Ivor Novello, are awards for songwriting and composing. They have been presented annually in London by the British Academy of Songwriters, Composers and Authors (BASCA) since 1956, and over 1,000 statuettes have been awarded.