Lutterworth was originally an Anglo Saxon settlement, its name is probably derived from the Old English Hlutre Worth: Lutterworth was mentioned in the Domesday Book of 1086. [4]

Lutterworth was granted its market charter in 1214 by King John and became a small but busy market town. [4]

In the 14th century, the religious reformer John Wycliffe was rector in St Mary's Church, Lutterworth between 1374 and 1384, and it was here that he is traditionally believed to have produced the first translation of the Bible from Latin into English. [5] The church was restored in the 19th century and a large tower replaced the original spire. The church still contains some 15th-century wall paintings. [6]

In the days of the stagecoach, Lutterworth was an important stopping-place on the road from Leicester to Oxford and London, and many former coaching inns remain in the town. [4] The town also contains a number of well preserved half-timbered buildings. [6]

Frank Whittle, inventor of the jet engine, developed some of the world's first jet engines at the British Thomson-Houston works in Lutterworth, and in nearby Rugby, during the late 1930s and the 1940s, with his company Power Jets. A replica of his first jet aircraft the Gloster E.28/39 stands in the middle of a roundabout just south of the town as a memorial and a number of papers and documents relating to Whittle's development of the jet engine are displayed at the town's museum. [7]

One of the established landmarks of the town is the 17th-century building on the corner of George Street and Leicester Road, previously a tavern called the Cavalier Inn. The Cavalier Inn was located just on the northern edge of the town centre of Lutterworth. Although the building has been modified over the years, it still retains its rustic charm with stone walls and low ceilings and beams.

Originally called the "Ram Inn" – that part of George Street was called Ram Lane – it changed its name in the early 1970s after a brewery 'make-over' which greatly improved the interior. It is said that the brewery did not like the name Ram Inn and prudishly renamed it 'the Cavalier' after claims that wounded royalist soldiers sheltered in Lutterworth following the Battle of Naseby in 1645.

In October 2010 the Cavalier Inn closed and was changed in status to a log-burning store, retailing log-burning fires and similar products and services.

The architect of Lutterworth Town Hall was Joseph Hansom, who took out the first patent of the horse-drawn hansom cab. [8] He also built Birmingham Town Hall.

Another of the landmarks of the town centre is the thatched roof & timber-framed building now known as the 'Shambles Inn'. This former abattoir and butcher's is the oldest timber-framed building in Lutterworth, dating back to the 16th century. It was first used as a public house from 1791 until 1840, when it was converted back to a home and butcher's shop. In 1982 it was converted back into a public house and named the Shambles. [9]

To the west of the town [2.5 mi (4.0 km)] is a large logistics and distribution centre called Magna Park, which is the main source of employment in the Lutterworth area. Magna Park is built upon the site of the old Bitteswell aerodrome. Also near Lutterworth is Stanford Hall.

A controversial issue in the town is how to manage the traffic flows emanating from Magna Park and the nearby M1 and A5 trunk roads. Approximately 3,000 heavy goods vehicles pass through the town every day and pollution levels are reported as being high [10]

The Census 2011 Summary also indicates an overall growth in residents' vehicles, which is likely to add to traffic and pollution concerns according to the Census summary. [11]

There is a Morrisons Food Store (formerly Safeway) on Bitteswell Road, as well as a Subway on High Street. Waitrose opened on 11 March 2010 on a site previously occupied by Netto. [12]

On the Greenacres Housing estate in the town there was an estate public house, recently called 'The Sir Frank Whittle' and previously called 'The Balloon'. This building was sold by the brewery to the Co-op who changed the use and structure of the premises to be the new Co-op store in the town. The Co-op Food Store previously located on George Street closed in June 2014 coinciding with the opening of the new store.

Lutterworth lies on the A426 Leicester–Rugby road, adjacent to the M1 motorway at junction 20. It is also located within a few miles of the M6 motorway and A5 trunk road. A southern bypass, the A4303, was opened in 1999, providing a route for traffic from the M1 to the A5 to avoid Lutterworth town centre.

Historically there were another two railway stations nearby to Lutterworth: The first was Ullesthorpe & Lutterworth, about 3 mi (4.8 km) to the north west, on the former Midland Railway (later part of the LMS) line from Rugby to Leicester, closed on 1 January 1962. The second was Welford & Kilworth at one time known as Welford & Lutterworth, some 5 mi (8.0 km) east on the London & North Western Railway (also later LMS) line from Rugby to Market Harborough and Peterborough, closed on 6 June 1966.

Arriva Midlands and Centrebus are the main operators of bus services around Lutterworth with services into Leicester, Market Harborough, Rugby, Warwickshire and Hinckley.

There are two primary schools in Lutterworth: John Wycliffe Primary School and Sherrier Primary School. Sherrier was originally housed in a Victorian building on Churchgate before moving to a new location on Bitteswell Road in 1983. [15] Sherrier featured on the BBC TV children's TV programme Blue Peter on 5 February 2008.

The local secondary schools are Lutterworth High School (for ages 11–16) on Woodway Road and Lutterworth College (for ages 11–18) on Bitteswell Road, both of which achieve good results in applicable exams. A new Studio School called Sir Frank Whittle opened in 2015 (for ages 14–18) that offers purely vocational courses. In 2019 the Sir Frank Whittle Studio School closed due to a lack of students and minimal further interest.

Feilding Palmer Hospital, run by Leicestershire Partnership NHS Trust is situated in the town. It has a ward which provides general rehabilitation and palliative and end of life care. [16] Under the Leicester, Leicestershire and Rutland Sustainability and transformation plan it is proposed to close. [17]

Mark Corrigan of the British television series Peep Show describes a trip to Lutterworth by public transport as taking so long that it feels like going to Mordor, a reference to Tolkien's Lord of the Rings trilogy.

The 1973 sitcom Me, myself and Nigel Wright was set in an ostrich farm near the town. [18] 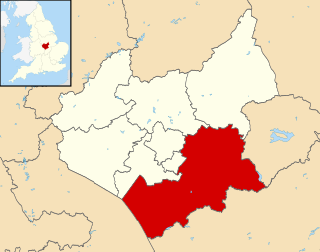 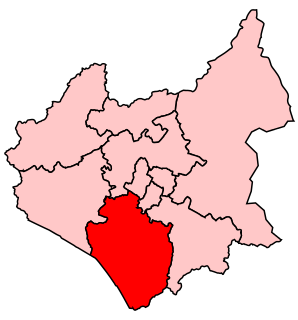 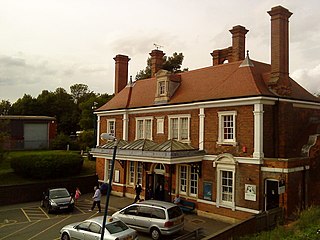 Market Harborough railway station is a Grade II listed station which serves the town of Market Harborough in Leicestershire, England. It is situated to the east of the town centre and lies on the Midland Main Line, 16 miles (26 km) south-east of Leicester.

Bitteswell is a small village and former civil parish, now in the parish of Bitteswell with Bittesby, in the Harborough district of Leicestershire in England. It is situated just north of the town of Lutterworth, and in the 2001 census had a population of 454. The population had increased to 554 at the 2011 census. It was recorded in the Domesday Book as Betmeswelle. 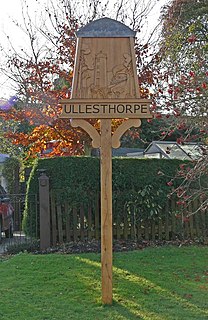 Ullesthorpe is a small village and civil parish situated in the Harborough district in southern Leicestershire. Ullesthorpe is noted for its historic background with a mill, disused railway station and traces of a medieval settlement evident on the edge of the village. 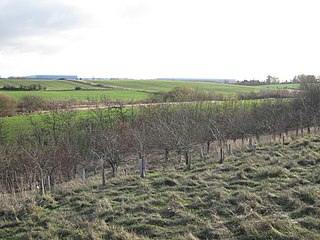 Bittesby is a deserted village and former civil parish, now in the parish of Bitteswell with Bittesby, in the Harborough district of Leicestershire, England. It is near the A5 Watling Street, about three miles from Lutterworth. The site of the village was adjacent to the route of the now disused Great Central Railway. According to the 2001 census the parish had a population of 6.

East Langton is a village and civil parish in the Harborough district of Leicestershire, England. 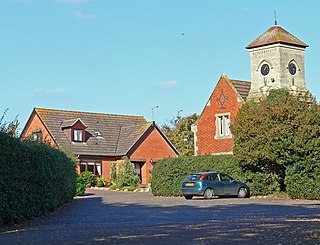 Catthorpe is a village and civil parish in the Harborough district of Leicestershire, England. It is located beside the River Avon and close to the A5 road, and hence close to the tripoint at Dow Bridge formed by Leicestershire, Northamptonshire and Warwickshire; the nearest towns are Rugby, in Warwickshire around 4 miles (6.4 km) to the southwest, and Lutterworth around 4 miles (6.4 km) to the north. At the 2001 Census, the parish had a population of 179, falling slightly to 173 at the 2011 census.

Claybrooke Magna is a village and civil parish in the Harborough district of Leicestershire, England, close to the A5 trunk road. The village is located between junctions 20 and 21 of the M1, and the towns of Leicester, Rugby, Lutterworth and Market Harborough are easily accessible.

Willoughby Waterleys is a small village and civil parish in the Harborough district of Leicestershire, England. It is situated near the A426 Leicester–to–Lutterworth road. Nearby villages are Ashby Magna, Peatling Magna and Countesthorpe. Main Street is the basis of the village running north to south, there have been some new developments such as bungalows and large detached houses however many farms still remain in the parish.

Lutterworth Town Association Football Club is a football club based in Lutterworth, Leicestershire, England. They are members of the United Counties League Premier Division and play at Dunley Way.

Theddingworth is a village and civil parish in Leicestershire, England. The population of the civil parish at the 2011 census was 217. The parish includes the neighbouring hamlet of Hothorpe, which lies across the county boundary in Northamptonshire.

Midlands 2 East (South) is a level 7 English Rugby Union league and level 2 of the Midlands League, made up of teams from the southern part of the East Midlands region including sides from Bedfordshire, Leicestershire, Northamptonshire and occasionally Cambridgeshire and Oxfordshire, who play home and away matches throughout the season. Each year all clubs in the division also take part in the RFU Intermediate Cup - a level 7 national competition.

The Sir Frank Whittle Studio School is a 14–19 Studio School and is half of The Lutterworth Academies Trust. It is situated alongside Lutterworth College in the rural market town of Lutterworth, South Leicestershire. There are approximately 80 students currently on roll.