Last updated February 04, 2020
Representation of a matrix as a product

For instance, when solving a system of linear equations

require fewer additions and multiplications to solve, compared with the original system

, though one might require significantly more digits in inexact arithmetic such as floating point.

Similarly, the QR decomposition expresses A as QR with Q an orthogonal matrix and R an upper triangular matrix. The system Q(Rx) = b is solved by Rx = QTb = c, and the system Rx = c is solved by 'back substitution'. The number of additions and multiplications required is about twice that of using the LU solver, but no more digits are required in inexact arithmetic because the QR decomposition is numerically stable.

Decompositions based on eigenvalues and related concepts

The Jordan normal form and the Jordan–Chevalley decomposition

Refers to variants of existing matrix decompositions, such as the SVD, that are invariant with respect to diagonal scaling.

There exist analogues of the SVD, QR, LU and Cholesky factorizations for quasimatrices and cmatrices or continuous matrices. [13] A ‘quasimatrix’ is, like a matrix, a rectangular scheme whose elements are indexed, but one discrete index is replaced by a continuous index. Likewise, a ‘cmatrix’, is continuous in both indices. As an example of a cmatrix, one can think of the kernel of an integral operator.

In linear algebra, a symmetric real matrix is said to be positive definite if the scalar is strictly positive for every non-zero column vector of real numbers. Here denotes the transpose of . When interpreting as the output of an operator, , that is acting on an input, , the property of positive definiteness implies that the output always has a positive inner product with the input, as often observed in physical processes.

An orthogonal matrix is a square matrix whose columns and rows are orthogonal unit vectors, i.e. 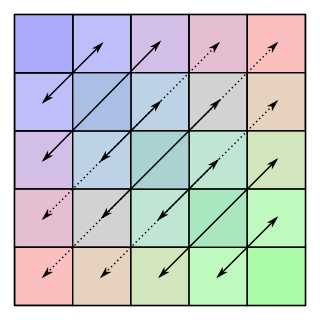 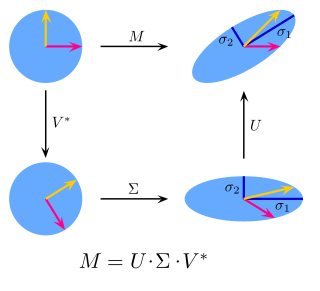 In mathematics, a complex square matrix A is normal if it commutes with its conjugate transpose A*:

In linear algebra, a square matrix is called diagonalizable or nondefective if it is similar to a diagonal matrix, i.e., if there exists an invertible matrix  and a diagonal matrix such that , or equivalently . For a finite-dimensional vector space , a linear map  is called diagonalizable if there exists an ordered basis of  consisting of eigenvectors of . These definitions are equivalent: if  has a matrix representation as above, then the column vectors of  form a basis of eigenvectors of , and the diagonal entries of  are the corresponding eigenvalues of ; with respect to this eigenvector basis,  is represented by . Diagonalization is the process of finding the above  and .

In the mathematical discipline of linear algebra, the Schur decomposition or Schur triangulation, named after Issai Schur, is a matrix decomposition. It allows one to write an arbitrary matrix as unitarily equivalent to an upper triangular matrix whose diagonal elements are the eigenvalues of the original matrix.

In numerical analysis, one of the most important problems is designing efficient and stable algorithms for finding the eigenvalues of a matrix. These eigenvalue algorithms may also find eigenvectors.

In mathematics, the polar decomposition of a square real or complex matrix is a factorization of the form , where is a unitary matrix and is a positive-semidefinite Hermitian matrix, both square and of the same size.

In mathematics, Sylvester’s criterion is a necessary and sufficient criterion to determine whether a Hermitian matrix is positive-definite. It is named after James Joseph Sylvester.