The scalar triple product (also called the mixed product, box product, or triple scalar product) is defined as the dot product of one of the vectors with the cross product of the other two.

is the (signed) volume of the parallelepiped defined by the three vectors given. Here, the parentheses may be omitted without causing ambiguity, since the dot product cannot be evaluated first. If it were, it would leave the cross product of a scalar and a vector, which is not defined.

If T is a rotation operator, then

but if T is an improper rotation, then

As an exterior product

Given vectors a, b and c, the product

is a trivector with magnitude equal to the scalar triple product, i.e.

and is the Hodge dual of the scalar triple product. As the exterior product is associative brackets are not needed as it does not matter which of a ∧ b or b ∧ c is calculated first, though the order of the vectors in the product does matter. Geometrically the trivector a ∧ b ∧ c corresponds to the parallelepiped spanned by a, b, and c, with bivectors a ∧ b, b ∧ c and a ∧ c matching the parallelogram faces of the parallelepiped.

As a trilinear function

This is known as triple product expansion, or Lagrange's formula, [2] [3] although the latter name is also used for several other formulas. Its right hand side can be remembered by using the mnemonic "ACB − ABC", provided one keeps in mind which vectors are dotted together. A proof is provided below. Some textbooks write the identity as

such that a more familiar mnemonic "BAC − CAB" is obtained, as in “back of the cab”.

Since the cross product is anticommutative, this formula may also be written (up to permutation of the letters) as:

From Lagrange's formula it follows that the vector triple product satisfies:

which is the Jacobi identity for the cross product. Another useful formula follows:

These formulas are very useful in simplifying vector calculations in physics. A related identity regarding gradients and useful in vector calculus is Lagrange's formula of vector cross-product identity: [4]

By combining these three components we obtain:

The proof follows from the properties of the contraction. [6] The result is the same vector as calculated using a × (b × c).

In tensor notation the triple product is expressed using the Levi-Civita symbol: [8]

-th component of the resulting vector. This can be simplified by performing a contraction on the Levi-Civita symbols,

. We can reason out this identity by recognizing that the index

will be summed out leaving only

. In the first term, we fix

. Likewise, in the second term, we fix

Returning to the triple cross product,

Consider the flux integral of the vector field

to the surface is given by

is a scalar triple product. 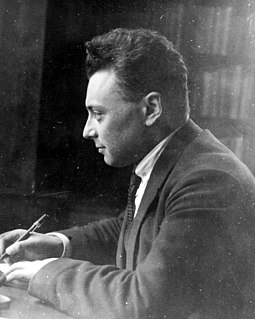 In mathematics, the cross product or vector product is a binary operation on two vectors in a three-dimensional oriented Euclidean vector space, and is denoted by the symbol . Given two linearly independent vectors a and b, the cross product, a × b, is a vector that is perpendicular to both a and b, and thus normal to the plane containing them. It has many applications in mathematics, physics, engineering, and computer programming. It should not be confused with the dot product. 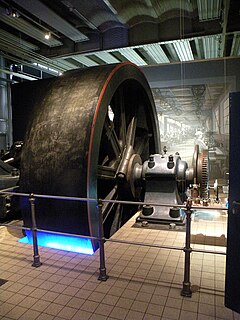 The moment of inertia, otherwise known as the mass moment of inertia, angular mass, second moment of mass, or most accurately, rotational inertia, of a rigid body is a quantity that determines the torque needed for a desired angular acceleration about a rotational axis, akin to how mass determines the force needed for a desired acceleration. It depends on the body's mass distribution and the axis chosen, with larger moments requiring more torque to change the body's rate of rotation. 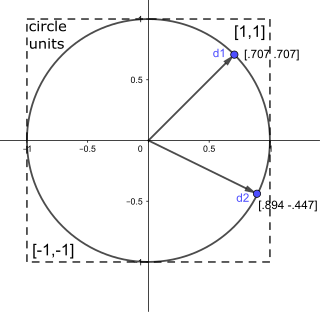 In mathematics, a unit vector in a normed vector space is a vector of length 1. A unit vector is often denoted by a lowercase letter with a circumflex, or "hat", as in .

In mathematics, especially in applications of linear algebra to physics, Einstein notation is a notational convention that implies summation over a set of indexed terms in a formula, thus achieving brevity. As part of mathematics it is a notational subset of Ricci calculus; however, it is often used in physics applications that do not distinguish between tangent and cotangent spaces. It was introduced to physics by Albert Einstein in 1916. 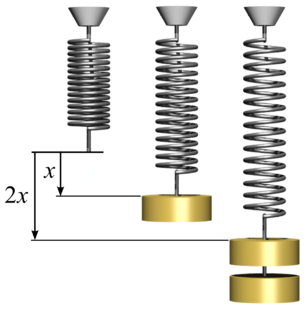 In physics, Hooke's law is an empirical law which states that the force needed to extend or compress a spring by some distance scales linearly with respect to that distance—that is, Fs = kx, where k is a constant factor characteristic of the spring, and x is small compared to the total possible deformation of the spring. The law is named after 17th-century British physicist Robert Hooke. He first stated the law in 1676 as a Latin anagram. He published the solution of his anagram in 1678 as: ut tensio, sic vis. Hooke states in the 1678 work that he was aware of the law since 1660.

In mathematics, the directional derivative of a multivariable differentiable (scalar) function along a given vector v at a given point x intuitively represents the instantaneous rate of change of the function, moving through x with a velocity specified by v.

In mathematics, Green's identities are a set of three identities in vector calculus relating the bulk with the boundary of a region on which differential operators act. They are named after the mathematician George Green, who discovered Green's theorem. 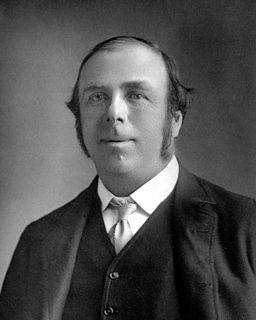 Screw theory is the algebraic calculation of pairs of vectors, such as forces and moments or angular and linear velocity, that arise in the kinematics and dynamics of rigid bodies. The mathematical framework was developed by Sir Robert Stawell Ball in 1876 for application in kinematics and statics of mechanisms. 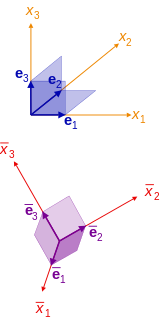 In geometry and linear algebra, a Cartesian tensor uses an orthonormal basis to represent a tensor in a Euclidean space in the form of components. Converting a tensor's components from one such basis to another is through an orthogonal transformation. 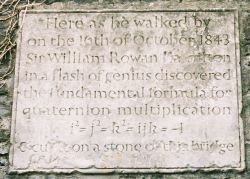 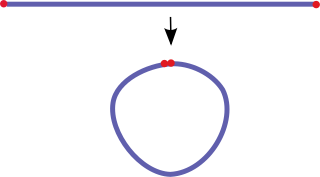 In physics, deformation is the continuum mechanics transformation of a body from a reference configuration to a current configuration. A configuration is a set containing the positions of all particles of the body.