In mathematics, a volume form on a differentiable manifold is a top-dimensional form (i.e., a differential form of top degree). Thus on a manifold

, a volume form is an

-form, a section of the line bundle

Kähler manifolds, being complex manifolds, are naturally oriented, and so possess a volume form. More generally, the

The following will only be about orientability of differentiable manifolds (it's a more general notion defined on any topological manifold).

A manifold is orientable if it has a coordinate atlas all of whose transition functions have positive Jacobian determinants. A selection of a maximal such atlas is an orientation on

to a positive multiple of the Euclidean volume form

. Call a basis of tangent vectors

of general linear mappings in

dimensions with positive determinant. They form a principal

sub-bundle of the linear frame bundle of

, and so the orientation associated to a volume form gives a canonical reduction of the frame bundle of

to a sub-bundle with structure group

. That is to say that a volume form gives rise to

. More reduction is clearly possible by considering frames that have

Thus a volume form gives rise to an

-structure as well. Conversely, given an

-structure, one can recover a volume form by imposing ( 1 ) for the special linear frames and then solving for the required

by requiring homogeneity in its arguments.

A manifold is orientable if and only if it has a volume form. Indeed,

is a deformation retract since

, where the positive reals are embedded as scalar matrices. Thus every

-structure is reducible to an

-structures coincide with orientations on

See also: Density on a manifold

Given a volume form

on an oriented manifold, the density

is a volume pseudo-form on the nonoriented manifold obtained by forgetting the orientation. Densities may also be defined more generally on non-orientable manifolds.

as a volume form, not simply a measure, and

indicates "integrate over the cell

with the opposite orientation, sometimes denoted

Given a volume form ω on M, one can define the divergence of a vector field X as the unique scalar-valued function, denoted by div X, satisfying

where LX denotes the Lie derivative along X and

denotes the interior product or the left contraction of ω along X. If X is a compactly supported vector field and M is a manifold with boundary, then Stokes' theorem implies

which is a generalization of the divergence theorem.

For any Lie group, a natural volume form may be defined by translation. That is, if ωe is an element of

, then a left-invariant form may be defined by

, where Lg is left-translation. As a corollary, every Lie group is orientable. This volume form is unique up to a scalar, and the corresponding measure is known as the Haar measure.

Any oriented pseudo-Riemannian (including Riemannian) manifold has a natural volume form. In local coordinates, it can be expressed as

are 1-forms that form a positively oriented basis for the cotangent bundle of the manifold. Here,

is the absolute value of the determinant of the matrix representation of the metric tensor on the manifold.

The volume form is denoted variously by

is the Hodge star, thus the last form,

, emphasizes that the volume form is the Hodge dual of the constant map on the manifold, which equals the Levi-Civita tensor ε.

Although the Greek letter ω is frequently used to denote the volume form, this notation is not universal; the symbol ω often carries many other meanings in differential geometry (such as a symplectic form).

Invariants of a volume form

In coordinates, they are both simply a non-zero function times Lebesgue measure, and their ratio is the ratio of the functions, which is independent of choice of coordinates. Intrinsically, it is the Radon–Nikodym derivative of

. On an oriented manifold, the proportionality of any two volume forms can be thought of as a geometric form of the Radon–Nikodym theorem.

A volume form on a manifold has no local structure in the sense that it is not possible on small open sets to distinguish between the given volume form and the volume form on Euclidean space ( Kobayashi 1972 ). That is, for every point p in M, there is an open neighborhood U of p and a diffeomorphism φ of U onto an open set in Rn such that the volume form on U is the pullback of

As a corollary, if M and N are two manifolds, each with volume forms

, then for any points

, there are open neighborhoods U of m and V of n and a map

In one dimension, one can prove it thus: given a volume form

Then the standard Lebesgue measure

. In higher dimensions, given any point

, it has a neighborhood locally homeomorphic to

, and one can apply the same procedure.

A volume form on a connected manifold M has a single global invariant, namely the (overall) volume (denoted

), which is invariant under volume-form preserving maps; this may be infinite, such as for Lebesgue measure on

. On a disconnected manifold, the volume of each connected component is the invariant.

is a homeomorphism of manifolds that pulls back

and the manifolds have the same volume.

Volume forms can also be pulled back under covering maps, in which case they multiply volume by the cardinality of the fiber (formally, by integration along the fiber). In the case of an infinite sheeted cover (such as

In vector calculus and differential geometry, Stokes' theorem, also called the generalized Stokes theorem or the Stokes–Cartan theorem, is a statement about the integration of differential forms on manifolds, which both simplifies and generalizes several theorems from vector calculus. It is a generalization of Isaac Newton's fundamental theorem of calculus that relates two-dimensional line integrals to three-dimensional surface integrals. 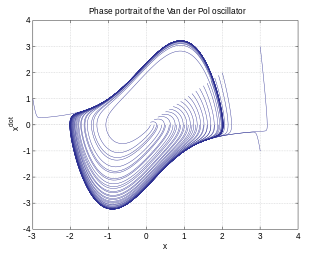 In mathematics, a frame bundle is a principal fiber bundle F(E) associated to any vector bundle E. The fiber of F(E ) over a point x is the set of all ordered bases, or frames, for Ex. The general linear group acts naturally on F(E ) via a change of basis, giving the frame bundle the structure of a principal GL(k, R)-bundle. 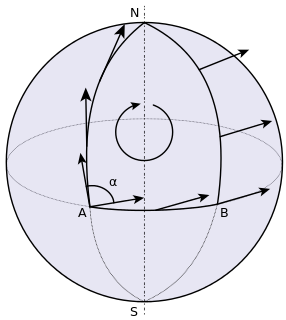 In differential geometry, the holonomy of a connection on a smooth manifold is a general geometrical consequence of the curvature of the connection measuring the extent to which parallel transport around closed loops fails to preserve the geometrical data being transported. For flat connections, the associated holonomy is a type of monodromy and is an inherently global notion. For curved connections, holonomy has nontrivial local and global features.

In mathematics, and specifically differential geometry, a density is a spatially varying quantity on a differentiable manifold that can be integrated in an intrinsic manner. Abstractly, a density is a section of a certain trivial line bundle, called the density bundle. An element of the density bundle at x is a function that assigns a volume for the parallelotope spanned by the n given tangent vectors at x.

In geometry of normed spaces, the Holmes–Thompson volume is a notion of volume that allows to compare sets contained in different normed spaces. It was introduced by Raymond D. Holmes and Anthony Charles Thompson.