On any almost Hermitian manifold, we can introduce a fundamental 2-form (or cosymplectic structure) that depends only on the chosen metric and the almost complex structure. This form is always non-degenerate. With the extra integrability condition that it is closed (i.e., it is a symplectic form), we get an almost Kähler structure. If both the almost complex structure and the fundamental form are integrable, then we have a Kähler structure.

A Hermitian metric on a complex vector bundle E over a smooth manifold M is a smoothly varying positive-definite Hermitian form on each fiber. Such a metric can be written as a smooth section

for all nonzero ζ in Ep.

are the components of a positive-definite Hermitian matrix.

A Hermitian metric h on an (almost) complex manifold M defines a Riemannian metric g on the underlying smooth manifold. The metric g is defined to be the real part of h:

The form g is a symmetric bilinear form on TMC, the complexified tangent bundle. Since g is equal to its conjugate it is the complexification of a real form on TM. The symmetry and positive-definiteness of g on TM follow from the corresponding properties of h. In local holomorphic coordinates the metric g can be written

One can also associate to h a complex differential form ω of degree (1,1). The form ω is defined as minus the imaginary part of h:

Again since ω is equal to its conjugate it is the complexification of a real form on TM. The form ω is called variously the associated (1,1) form, the fundamental form, or the Hermitian form. In local holomorphic coordinates ω can be written

It is clear from the coordinate representations that any one of the three forms h, g, and ω uniquely determine the other two. The Riemannian metric g and associated (1,1) form ω are related by the almost complex structure J as follows

for all complex tangent vectors u and v. The Hermitian metric h can be recovered from g and ω via the identity

All three forms h, g, and ω preserve the almost complex structure J. That is,

for all complex tangent vectors u and v.

Note that many authors call g itself the Hermitian metric.

Every almost Hermitian manifold M has a canonical volume form which is just the Riemannian volume form determined by g. This form is given in terms of the associated (1,1)-form ω by

One can also consider a hermitian metric on a holomorphic vector bundle.

A Kähler manifold is an almost Hermitian manifold satisfying an integrability condition. This can be stated in several equivalent ways.

Let (M, g, ω, J) be an almost Hermitian manifold of real dimension 2n and let ∇ be the Levi-Civita connection of g. The following are equivalent conditions for M to be Kähler:

The equivalence of these conditions corresponds to the "2 out of 3" property of the unitary group.

In particular, if M is a Hermitian manifold, the condition dω = 0 is equivalent to the apparently much stronger conditions ∇ω = ∇J = 0. The richness of Kähler theory is due in part to these properties. 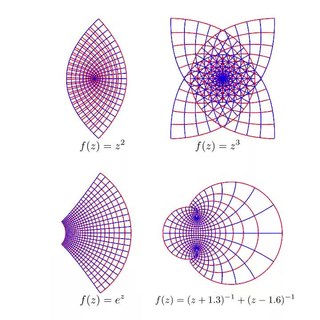 In differential geometry and complex geometry, a complex manifold is a manifold with an atlas of charts to the open unit disk in Cn, such that the transition maps are holomorphic.

In mathematics, the Fubini–Study metric is a Kähler metric on projective Hilbert space, that is, on a complex projective space CPn endowed with a Hermitian form. This metric was originally described in 1904 and 1905 by Guido Fubini and Eduard Study.

In mathematics, a CR manifold is a differentiable manifold together with a geometric structure modeled on that of a real hypersurface in a complex vector space, or more generally modeled on an edge of a wedge.

In heterotic string theory, the Strominger's equations are the set of equations that are necessary and sufficient conditions for spacetime supersymmetry. It is derived by requiring the 4-dimensional spacetime to be maximally symmetric, and adding a warp factor on the internal 6-dimensional manifold.

In mathematics, a nearly Kähler manifold is an almost Hermitian manifold , with almost complex structure , such that the (2,1)-tensor is skew-symmetric. So,

In mathematics and theoretical physics, and especially gauge theory, the deformed Hermitian Yang–Mills (dHYM) equation is a differential equation describing the equations of motion for a D-brane in the B-model of string theory. The equation was derived by Mariño-Minasian-Moore-Strominger in the case of Abelian gauge group, and by Leung–Yau–Zaslow using mirror symmetry from the corresponding equations of motion for D-branes in the A-model of string theory.