In differential geometry, the tangent bundle of a differentiable manifold

which assembles all the tangent vectors in

. As a set, it is given by the disjoint union [note 1] of the tangent spaces of

denotes the tangent space to

can be thought of as a pair

is a point in

is a tangent vector to

There is a natural projection

. This projection maps each element of the tangent space

to the single point

The tangent bundle comes equipped with a natural topology (described in a section below). With this topology, the tangent bundle to a manifold is the prototypical example of a vector bundle (which is a fiber bundle whose fibers are vector spaces). A section of

is a vector field on

, and the dual bundle to

. By definition, a manifold

is parallelizable if and only if the tangent bundle is trivial. By definition, a manifold

is framed if and only if the tangent bundle

is stably trivial, meaning that for some trivial bundle

is trivial. For example, the n-dimensional sphere Sn is framed for all n, but parallelizable only for n = 1, 3, 7 (by results of Bott-Milnor and Kervaire).

One of the main roles of the tangent bundle is to provide a domain and range for the derivative of a smooth function. Namely, if

is a smooth function, with

smooth manifolds, its derivative is a smooth function

The tangent bundle comes equipped with a natural topology (not the disjoint union topology) and smooth structure so as to make it into a manifold in its own right. The dimension of

is twice the dimension of

is an open contractible subset of

, then there is a diffeomorphism

which restricts to a linear isomorphism from each tangent space

. As a manifold, however,

is not always diffeomorphic to the product manifold

. When it is of the form

is an open subset of Euclidean space.

If M is a smooth n-dimensional manifold, then it comes equipped with an atlas of charts

is an open set in

is a diffeomorphism. These local coordinates on

give rise to an isomorphism

. We may then define a map

is open if and only if

These maps are homeomorphisms between open subsets of

and therefore serve as charts for the smooth structure on

. The transition functions on chart overlaps

may be defined as a rank

whose transition functions are given by the Jacobian of the associated coordinate transformations.

The simplest example is that of

. In this case the tangent bundle is trivial: each

is canonically isomorphic to

Another simple example is the unit circle,

(see picture above). The tangent bundle of the circle is also trivial and isomorphic to

. Geometrically, this is a cylinder of infinite height.

and the unit circle

, both of which are trivial. For 2-dimensional manifolds the tangent bundle is 4-dimensional and hence difficult to visualize.

: this tangent bundle is nontrivial as a consequence of the hairy ball theorem. Therefore, the sphere is not parallelizable.

is a smooth map

. In the language of fiber bundles, such a map is called a section . A vector field on

is therefore a section of the tangent bundle of

The set of all vector fields on

. Vector fields can be added together pointwise

and multiplied by smooth functions on M

then takes on the structure of a module over the commutative algebra of smooth functions on M, denoted

A local vector field on

is a local section of the tangent bundle. That is, a local vector field is defined only on some open set

and assigns to each point of

a vector in the associated tangent space. The set of local vector fields on

are precisely the sections of the cotangent bundle

that associate to each point

to a smooth function

Since the tangent bundle

can be defined recursively as

has an induced derivative, for which the tangent bundle is the appropriate domain and range

A distinct but related construction are the jet bundles on a manifold, which are bundles consisting of jets.

On every tangent bundle

, considered as a manifold itself, one can define a canonical vector field

since the vector space itself is flat, and thus has a natural diagonal map

is curved, each tangent space at a point

, is flat, so the tangent bundle manifold

is locally a product of a curved

for "choice of coordinates" and

is the projection onto the first coordinates:

Splitting the first map via the zero section and the second map by the diagonal yields the canonical vector field.

are local coordinates for

, the vector field has the expression

, as only the tangent directions can be naturally identified.

The derivative of this function with respect to the variable

, which is an alternative description of the canonical vector field.

The existence of such a vector field on

is analogous to the canonical one-form on the cotangent bundle. Sometimes

one can characterize the tangent bundle. Essentially,

can be characterized using 4 axioms, and if a manifold has a vector field satisfying these axioms, then the manifold is a tangent bundle and the vector field is the canonical vector field on it. See for example, De León et al.

There are various ways to lift objects on

is a curve in

. In contrast, without further assumptions on

(say, a Riemannian metric), there is no similar lift into the cotangent bundle.

The vertical lift of a function

is the canonical projection. 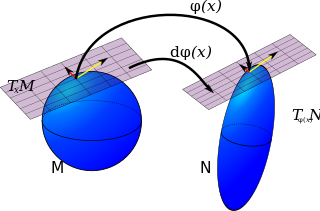