A mini-map or minimap is a miniature map that is often placed at a screen corner in video games to aid players in orienting themselves within the game world. They are often only a small portion of the screen and thus must be selective in what details they display. Elements usually included on Mini-maps vary by video game genre. However, commonly included features are the position of the player character, allied units or structures, enemies, objectives and surrounding terrain.

Mini-maps have become very common in real-time strategy and MMORPG video games because they serve as an indication of where the current screen lies within the scope of the game world. Most first person shooter games also have some version or variant of the mini map, with the odd exception of Call of Duty: Modern Warfare (2019 video game), often showing enemy and teammates locations in real time.

Many mini-maps make use of similar features. Common features are:

In many games using a mini-map, the mini-map begins completely blank, while the map is automatically drawn as the player discovers new areas of the game world. After players discover new areas, the terrain of the discovered area often remains visible on the mini-map. If the player's characters or units cease being able to see the area, the area might be covered by a fog of war, so that unit or structure movements in that area will not be shown. Things in a fog of war portion of a mini-map may not be updated until they are rediscovered. [1]

Similar to custom layers in Google Earth, some team-oriented multi-player games, such as Age of Empires II or Empire Earth , allow players to draw temporary lines, signals or markings on the mini-map for others to see. This allows for quick communication over large distances in games.[ citation needed ]

In some 3D video games the mini-map rotates when the player character or game camera faces different directions, to keep the top of the map always corresponding to forward from the cameras point of view. This is common for games in the Grand Theft Auto series, and many racing games which show the track in a mini-map. Other games such as many in The Legend of Zelda series, the map does not rotate but features an arrow that moves about and rotates to show the position of the player character and the direction they're facing. In some games mini-maps that only show the close surrounding area often have icons on the edge to show the direction of locations or characters that are outside of the area shown on the map. Some games also have a feature where the mini-map zooms out when the player character is travelling at high speed, and zooms back in when they slow down.

An Automap is similar to a mini-map but traces its origin back to early role-playing games. In early dungeon crawl video games players were expected to draw maps by hand as they played the game so they could solve complex mazes and explore large dungeons. Game boxes such as those for early 1980s Wizardry games included graph paper for this purpose.

Games featuring automapping simulate the creation of a map, typically showing an abstract top-down view of nearby areas of the game world that is automatically updated as the player character gains knowledge of the environment. Automaps typically display doors, terrain types, and important locations or items.[ citation needed ] When discussing The Bard's Tale III 's role as one of the first CRPGs with automapping, Computer Gaming World in 1994 wondered "How did we ever play without it?". [2]

Early automaps typically found in role-playing video games were pause screens that stopped gameplay when opened. Early examples of video games to feature a real-time automap include Namco's Rally-X in 1980, [3] Gebelli Software's Horizon V in 1982, [4] and Arsys Software's WiBArm in 1986. [5] When the feature became popular with action-oriented games such as Doom and Diablo , the automap feature in these games did not pause the game and allowed the player to continue gameplay while the map was on screen.

MUDs which were popular multiplayer virtual worlds in the mid 1990s rarely provided an automap. This resulted in MUD clients adding automapping as a feature, notably zMUD in September 1996. [6] [7] [8]

A code minimap in a Text editor or Integrated development environment (IDE) is a reduced overview of the entire file in its own view pane, typically next to the main editor pane. The portion of the file visible in the main editor pane is highlighted and clicking or dragging in this view scrolls the editor through the file. 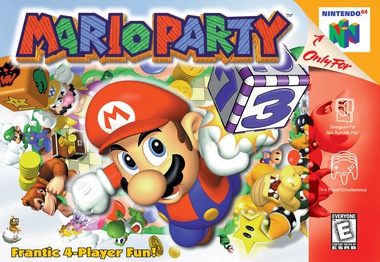 Mario Party is a party video game developed by Hudson Soft and published by Nintendo for the Nintendo 64 game console. It was released in Japan in December 1998, and in the United States in February 1999. The game was targeted at a young audience. It is the first installment in the Mario Party series and was followed by Mario Party 2 in 1999 for the same system. 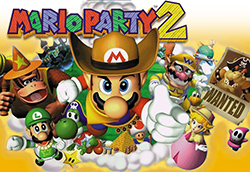 Mario Party 2 is a party video game developed by Hudson Soft and published by Nintendo for the Nintendo 64. The second game in the Mario Party series, it was released in Japan in December 1999, and in the United States in January 2000.

An experience point is a unit of measurement used in tabletop role-playing games (RPGs) and role-playing video games to quantify a player character's progression through the game. Experience points are generally awarded for the completion of missions, overcoming obstacles and opponents, and for successful role-playing.

A multiplayer video game is a video game in which more than one person can play in the same game environment at the same time, either locally or online over the internet. Multiplayer games usually require players to share the resources of a single game system or use networking technology to play together over a greater distance; players may compete against one or more human contestants, work cooperatively with a human partner to achieve a common goal, supervise other players' activity, co-op. Multiplayer games allow players interaction with other individuals in partnership, competition or rivalry, providing them with social communication absent from single-player games.

A massively multiplayer online game is an online game with large numbers of players, typically from hundreds to thousands, on the same server. MMOs usually feature a huge, persistent open world, although some games differ. These games can be found for most network-capable platforms, including the personal computer, video game console, or smartphones and other mobile devices.

Player(s) versus player(s), better known as PvP, is a type of multiplayer interactive conflict within a game between two or more live participants. This is in contrast to games where players compete against computer-controlled opponents and/or players, which is referred to as player versus environment (PvE). The terms are most often used in games where both activities exist, particularly MMORPGs, MUDs, and other role-playing video games. PvP can be broadly used to describe any game, or aspect of a game, where players compete against each other. PvP is often controversial when used in role-playing games. In most cases, there are vast differences in abilities between experienced and novice players. PvP can even encourage experienced players to immediately attack and kill inexperienced players. PvP is sometimes called player killing.

A dungeon crawl is a type of scenario in fantasy role-playing games in which heroes navigate a labyrinth environment, battling various monsters, avoiding traps, solving puzzles, and looting any treasure they may find. Because of its simplicity, a dungeon crawl can be easier for a gamemaster to run than more complex adventures, and the "hack and slash" style of play is appreciated by players who focus on action and combat. However dungeon crawls often lack meaningful plot or logical consistency.

Cheating in online games is defined as the action of pretending to comply with the rules of the game, while secretly subverting them to gain an unfair advantage over an opponent. Depending on the game, different activities constitute cheating and it is either a matter of game policy or consensus opinion as to whether a particular activity is considered to be cheating.

A MUD client is a computer application used to connect to a MUD, a type of multiplayer online game. Generally, a MUD client is a very basic telnet client that lacks VT100 terminal emulation and the capability to perform telnet negotiations. On the other hand, MUD clients are enhanced with various features designed to enhance the gameplay of MUDs.

Zugg's MUD Client (zMUD) is a MUD client developed by Mike Potter. Version 1.0 was released in December 1995 as a Windows port of the TinTin++ Unix MUD client. zMUD was initially licensed as freeware, but Mike Potter realized that he could make a living from sales of the client and started selling zMUD 4.0 as shareware in September 1996.

In video gaming, the HUD or status bar is the method by which information is visually relayed to the player as part of a game's user interface. It takes its name from the head-up displays used in modern aircraft.

A text game or text-based game is an electronic game that uses a text-based user interface, that is, the user interface employs a set of encodable characters such as ASCII instead of bitmap or vector graphics.

TinTin++ is a MUD client primarily written for Unix-like systems. It is one of the oldest MUD clients in existence and a successor of the TINTIN client. TINTIN stands for "The kIckiNTickin dIkumud clieNt" though its author admits this to be a backronym.

An overworld is, in a broad sense, an area within a video game that interconnects all its levels or locations. They are mostly common in role-playing games, though this does not exclude other video game genres, such as some platformers and strategy games. 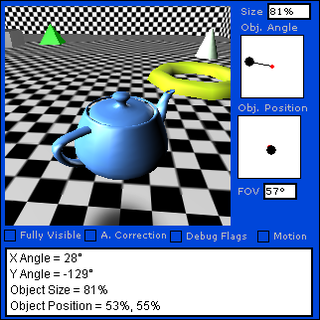 In 3D video games, a virtual camera system aims at controlling a camera or a set of cameras to display a view of a 3D virtual world. Camera systems are used in videogames where their purpose is to show the action at the best possible angle; more generally, they are used in 3D virtual worlds when a third person view is required.

Isometric video game graphics are graphics employed in video games and pixel art which angle the viewpoint to reveal facets of the environment that would not be visible from a top-down perspective or side view, thereby producing a three-dimensional effect. Despite the name, isometric computer graphics are not necessarily truly isometric—i.e., the x, y, and z axes are not necessarily oriented 120° to each other. Instead, a variety of angles occur; some form of parallel projection, such as dimetric projection with a 2:1 pixel ratio, is the most common. The terms "3/4 perspective", "2.5D", and "pseudo-3D" are also sometimes used, although these terms can possess slightly different meanings in other contexts.