The following is a list of foreign ministers of Chad since its founding in 1960:

The foreign relations of Chad are significantly influenced by the desire for oil revenue and investment in Chadian oil industry and support for former Chadian President Idriss Déby. Chad is officially non-aligned but has close relations with France, the former colonial power. Relations with neighbouring Libya, and Sudan vary periodically. Lately, the Idris Déby regime waged an intermittent proxy war with Sudan. Aside from those two countries, Chad generally enjoys good relations with its neighbouring states.

Nagoum Yamassoum is a Chadian politician who was Prime Minister of Chad from 1999 to 2002 and Minister of State for Foreign Affairs from 2003 to 2005. He is from the district of Grande Sido in the region of Moyen Chari.

This is a list of foreign ministers of the Republic of China, heading its Ministry of Foreign Affairs.

Sam Kahamba Kutesa is a Ugandan businessman, politician and lawyer. He is the Minister of Foreign Affairs in the Cabinet of Uganda, a position he has held since 13 January 2005 and maintained through three cabinet reshuffles. He is also the elected Member of Parliament (MP) for Mawogola County in Sembabule District. He was the President of the United Nations General Assembly during its 69th session in 2014–2015.

Pierre Toura Gaba (1920–1998) was a Chadian politician and diplomat. Following the independence of Chad, he served as its first Minister of Foreign Affairs from 1960 to 1961.

Ahmad Allam-Mi is a Chadian diplomat who has been Secretary-General of the Economic Community of Central African States since 2013. He was the Foreign Minister of Chad from 2005 to 2008, and he was Chad's Permanent Representative to the United Nations from 2008 to 2013. 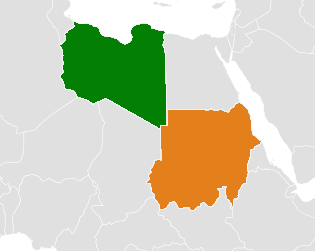 The Libyan–Sudanese relations refers to the long historical relations between Libya and Sudan, both are Arab countries.

Chad–Romania relations were established on 15 July 1969. However, neither country has an embassy in the other's capital, and although an agreement on trade was signed in 1969, followed by an agreement on economic and technical cooperation in 1971, as of 2007, the volume of bilateral trade remained insignificant.

Mahamat Zene Cherif is a Chadian diplomat. Since 24 December 2017, he has been the Minister of Foreign Affairs for the Republic of Chad. He previously served as the Permanent Representative of Chad to the United Nations in New York.

Hissein Brahim Taha is a Chadian diplomat who briefly served in the government of Chad as Minister of Foreign Affairs in 2017.

Chad–Taiwan relations are relations between Chad and the Republic of China (ROC).

Chad–India relations refers to the international relations that exist between Chad and India. The High Commission of India in Abuja, Nigeria is concurrently accredited to Chad. India also maintains an Honorary Consulate in N'Djamena. In 2019, Chad opened a resident embassy in New Delhi.

Chad–Turkey relations are the foreign relations between Chad and Turkey. Turkey recognized the independence of Chad on August 11, 1960 and established diplomatic relations on January 27, 1960.