He made his first U.S. National team in gymnastics in 1980 [10] and continued to retain his place on the team until 1984. While attending UCLA as a history major [11] on scholarship, [12] he won the All-Around in the 1983 and 1984 USA Gymnastics National Championships, and the 1984 NCAA Men's Gymnastics Championship. [13] He then qualified for the Olympic Games during the Olympic trials held from June 1–3, 1984 in Jacksonville Florida. [14] Two of the moves in his arsenal going into the Games were invented by and named for him—the Gaylord flip and the Gaylord II. [15]

In the 1984 Summer Olympic Games, Gaylord led the gold-medal-winning U.S. men's gymnastics team, becoming the first American gymnast to score a perfect 10.00 in the Olympics. He also won the silver medal in vault, the bronze in parallel bars and the bronze in the rings. In addition to his individual accolades, Gaylord led the US men's gymnastics team to a gold medal in the team competition for the first and only time in Olympics history. [20] The moment was heralded as a significant upset over the teams from China and Japan. [21] After the 1984 Olympics he and his fellow Olympic gymnasts went on a six-month promotional tour across the US, selling out arenas in about two dozen American cities. He also wrote his first book during this period, centering on using gymnastics exercises to train. [11] He was also named by President Ronald Reagan as a member of the President's Council on Physical Fitness and Sports in November 1985. [22]

Gaylord has appeared in several movies and TV shows. Most notably, he performed as a stunt double for Chris O'Donnell (as Robin) and the uncredited role of Mitch Grayson (Robin's older brother) in the 1995 movie Batman Forever , and played the lead in American Anthem (1986), [23] opposite actress Janet Jones. The latter movie, in which Gaylord played a gymnast training for the Olympics, has been noted as an inspiration to future generations of Olympic gymnasts. [24] He was also a frequent guest star on Hollywood Squares , and appeared in advertisements for Diet Coke, Nike, Inc., Vidal Sassoon, Soloflex, Levi Strauss & Co., and Texaco. [25] [26]

Gaylord has also remained an ambassador to the sport of gymnastics, serving as a commentator for NBC and Fox Sports during televised gymnastics events, as well as developing several nationally-televised fitness programs and products. [25] [27] [28]

Since retiring from acting, Gaylord has worked as a financial advisor at Morgan Stanley Smith Barney. [29] He has also been an advocate for child allergy awareness. [30]

Peter Glen Vidmar is an American gymnast and Olympic medalist.

Bart Wayne Conner is a retired American Olympic gymnast. As a member of the US men's gymnastics team at the 1984 Summer Olympic Games, Conner won two gold medals. He currently owns and operates the Bart Conner Gymnastics Academy in Norman, Oklahoma, along with his wife, Romanian Olympic gold medalist Nadia Comăneci. In addition, both Comăneci and Conner are highly involved with the Special Olympics. 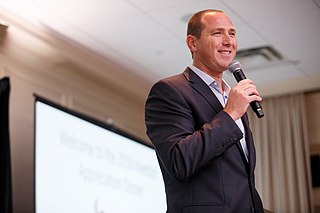 Jason Edward Lezak is an American swimming executive. He currently serves as the general manager of the Cali Condors, which is part of the International Swimming League. He is a former American competition swimmer who specialized in the 50-meter and 100-meter freestyle races. His pro career lasted for nearly fifteen years, spanning four Olympic games and eight Olympic medals.

Ágnes Keleti is a retired Hungarian-Israeli Olympic and world champion artistic gymnast and coach. She is the oldest living Olympic champion and medalist, reaching her 100th birthday January 9, 2021. While representing Hungary at the Summer Olympics, she won 10 Olympic medals including five gold medals, three silver medals, and two bronze medals, and is considered to be one of the most successful Jewish Olympic athletes of all time. Keleti holds more Olympic medals than any other individual with Israeli citizenship, and more Olympic medals than any other Jew, except Mark Spitz. She was the most successful athlete at the 1956 Summer Olympics. In 1957, Keleti immigrated to Israel, where she lived before returning to Hungary in 2015.

Timothy P. Daggett is a former American gymnast and an Olympic gold medalist. He is a graduate of West Springfield High School and UCLA, who competed in the 1984 Los Angeles Olympics, along with Bart Conner, Peter Vidmar and Mitch Gaylord. There, Daggett scored a perfect 10 on the high bar, assisting his team in winning a gold medal – the first for the U.S. men's gymnastics team in Olympic history. In addition to the team gold medal, he earned an individual bronze medal on the pommel horse. In 2005, he was inducted into the United States Olympic Hall of Fame.

At the 1977 Maccabiah Games in Israel, 2,700 athletes from 33 countries participated in 26 different sports.

Abie Grossfeld is an American gymnastics coach and former gymnast. Grossfeld has represented the United States as a gymnastics competitor or coach in seven Olympic Games, seven World Championships, six Maccabiah Games, and five Pan American Games — in addition to many other major gymnastics events.

Alexandra Rose Raisman is a retired American artistic gymnast and two-time Olympian. She was captain of both the 2012 "Fierce Five" and 2016 "Final Five" U.S. women's Olympic gymnastics teams, which won their respective team competitions.

Mark Berger is a Canadian judoka. A winner of the gold medal in the Men's Heavyweight Judo event at the 1983 Pan American Games and the bronze medal at the 1984 Summer Olympics, he was inducted into the Manitoba Sports Hall of Fame in 1994. He was born in Ukraine and became a Canadian citizen in the late 1970s.

James Hartung is a retired American gymnast. He was born in Omaha, Nebraska.

Charles Lakes is a retired American gymnast who participated in the 1988 Olympics.

Valerie Le Zimring-Schneiderman is a former Olympic rhythmic gymnast. She represented the United States at the 1984 Summer Olympics, and finished 11th in the individual all-around.

Ronald S. Barak is an American gymnast. At the 1961 Maccabiah Games he won eight gold medals, one silver medal, and one bronze medal. At the 1964 NCAA Men's Gymnastics Championships he won the all-around competition, the horizontal bars, and the parallel bars, and at the 1964 Amateur Athletic Union (AAU) National Gymnastics Competition he was the champion in the horizontal bars. He competed in eight events at the 1964 Summer Olympics.

Sharon Shapiro is an American former gymnast. She won five gold medals at the 1977 Maccabiah Games. In 1978, she was the U.S. National Champion in the vault. She was a two-time National Collegiate All-Around Champion. In 1981, she won the Honda-Broderick Award as the nation's most outstanding collegiate women's gymnast.