Its collection used to be about 618,000 books and periodicals as well as 15,800 rare and valuable manuscripts. However, in 2006, the military government announced a plan to move a large part of its collection to a new National Library in Nay Pyi Taw, and to auction off its 8-story building and 10-acre (4.0 ha) lot in Tamwe Township. [3] In October 2008, the National Library was moved to its current location.

The National Library originated from the Bernard Free Library, which opened in 1883 during the British colonial era. The Bernard Library was renamed the State Library under the management of the Ministry of Culture in 1952, and changed its name to the National Library in 1967. The library was first located in the Jubilee Hall building, then moved to Pansodan Road, then relocated to its penultimate home in Tamwe, and finally moved to its present location in Yankin in October 2008. [1]

Yangon, formerly known as Rangoon, is the capital of the Yangon Region and the largest city of Myanmar. Yangon served as the capital of Myanmar until 2006, when the military government relocated the administrative functions to the purpose-built city of Naypyidaw [nèpjìdɔ̀] in central Myanmar. With over 7 million people, Yangon is Myanmar's most populous city and its most important commercial centre.

Naypyidaw, officially spelled Nay Pyi Taw, is the capital city of Myanmar. The city is located at the center of the Naypyidaw Union Territory. It is unusual among Myanmar's cities, being an entirely planned city outside of any state or region, similar to Canberra in Australia, Brasília in Brazil, Washington, D.C. in the United States, Islamabad in Pakistan or Abuja in Nigeria. The city officially replaced Yangon as the administrative capital of Myanmar in 2006.

The Schomburg Center for Research in Black Culture is a research library of the New York Public Library (NYPL) and an archive repository for information on people of African descent worldwide. Located at 515 Malcolm X Boulevard between West 135th and 136th Streets in the Harlem neighborhood of Manhattan, New York City, it has, almost from its inception, been an integral part of the Harlem community. It is named for Afro-Puerto Rican scholar Arturo Alfonso Schomburg.

Sarpay Beikman originated as the Burmese Translation Society. Its first President was Prime Minister U Nu, who started a Burmese translation job at Judson College. The purpose was to translate world culture, literature, education for the Burmese public. In 1963 the society was absorbed into the Ministry of Information's Printing and Publishing Enterprise as the Sarpay Beikman Literature House, and the mandate was extended to encourage local writers and to print and publish books of all types. The society presents the annual Sarpay Beikman Manuscript Awards and Burma National Literature Awards for excellent new unpublished and published writing in various categories.

The Bernard Free Library was established on 21 February 1883 when the Commissioner of Lower Myanmar, Sir Charles Edward Bernard opened a library, with his collection of books, in the centre of Rangoon. This library was the first free public library in Myanmar.

The National Museum of Myanmar (Yangon),, located in Dagon, Yangon, is the major one of the two national museums for Burmese art, history and culture in Myanmar. Founded in 1952, the five-story museum has an extensive collection of ancient artifacts, ornaments, works of art, inscriptions and historic memorabilia, related to history, culture and civilization of Burmese people. The main attraction of the museum is the only surviving original Lion Throne of the Burmese monarchs. There are more than 4000 permanent objects in the museum.

The Tun Foundation Bank is a privately owned bank in Myanmar that was established on 8 June 1994. All the profits from this bank go into scholarships for children from poor families. 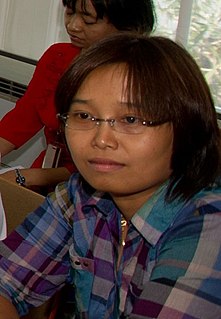 Zin Mar Aung is a Burmese politician, activist, and former inmate who currently serves as a member of parliament in the House of Representatives for Yankin Township constituency.

Sithu Thaw Kaung is a Burmese university librarian, historian and leading authority in Asian library studies. He specializes in the preservation and archival of traditional documents, including palm leaf manuscripts.