The Northern Ireland Football Writers' Association Player of the Year (often called the NIFWA Player of the Year) is an annual award given to the player who is adjudged to have been the best of the season in the IFA Premiership. It is one of two association football Player of the Year awards in Northern Ireland, with the other being the Ulster Footballer of the Year award. The award has been presented since the 1969–70 season and the winner is chosen by a vote amongst members of the association. [1] The first winner of the award was Des Dickson of Coleraine. The player to have received the award more than any other is Glenn Ferguson, who has collected the award on three occasions, the last of which was in 2006. [2] Two other players have won the award twice; Ivan Murray was the first in 1975 and Vinny Arkins was the most recent, in 2002.

A. ^ : Player also won the Ulster Footballer of the Year award.
B. ^ : Sourced to the official website of the Northern Ireland Football Writers' Association unless otherwise stated. [22]
C. a b : Won the award on two occasions. [22]
D. ^ : Won the award three times. [22]

David Jonathan Healy, MBE is a Northern Irish former footballer and now football manager who is in charge at NIFL Premiership club Linfield. 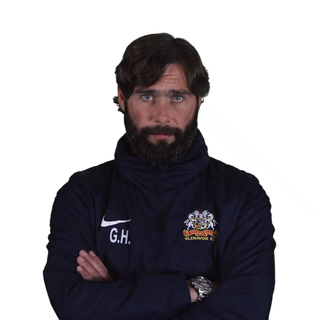 Gary Hamilton is a footballer from Northern Ireland. He is currently the player-manager for NIFL Premiership club Glenavon. 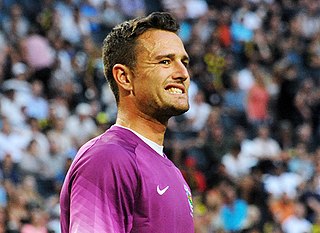 Jonathan "Jonny" Tuffey is a Northern Irish professional association football player who plays as a goalkeeper for Crusaders and has also appeared for the Northern Ireland national football team. Tuffey started his career at English Championship side Coventry City, however he failed to make a breakthrough into the first team. He then joined the then Scottish First Division team Partick Thistle in 2006, replacing the legendary Kenny Arthur. Following a successful four years at Firhill, Tuffey signed for SPL side Inverness Caley Thistle and then St Johnstone. Tuffey then returned to Northern Ireland to sign for Linfield, where he played for two years before transferring to Glenavon. On 31 January 2021, it was confirmed that Tuffey had signed a Transfer deadline day contract for Crusaders. This signing sparked the end of his 6 year tenure at Mourneview Park.

Alan Mannus is a Northern Irish professional football goalkeeper. He began his career at Linfield, and during his time there he had spells on loan at Larne and Carrick Rangers. He then signed for Shamrock Rovers and in 2011, moved to St Johnstone. He has played for Northern Ireland at international level.

Noel Bailie is a former semi-professional footballer from Northern Ireland who spent his entire career playing for Linfield. He played as a sweeper and wore shirt number 11.He is ranked as the second best defender to have played in the Irish League behind Crusaders Glen Dunlop. 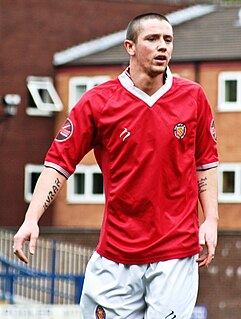 Rory Christopher Patterson is a Northern Irish footballer who plays as a forward for Dungannon Swifts. He also played for the Northern Ireland national team. Having played youth football for Sion Swifts, Moorfield Celtic and Townsend United, Patterson joined Rochdale in 2002 before having spells with Radcliffe Borough and Mossley. 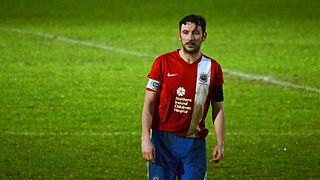 Chris Morrow is a Northern Irish footballer who currently plays for Brantwood.

Stuart Dallas is a Northern Irish professional footballer who plays for Premier League club Leeds United and the Northern Ireland national team. A versatile player, most of his career appearances have been as a winger but in recent seasons he has played more often in midfield and at full-back. He was a key part of the Leeds United team under Marcelo Bielsa that won the 2019-20 EFL Championship and promotion to the Premier League.

The 2012–13 IFA Premiership was the fifth season of Northern Ireland's national football league in this format since its inception in 2008, and the 112th season of Irish league football overall.

The Big Two derby, also referred to simply as the Big Two or Bel Classico, is the name given to the Northern Irish association football derby between Belfast clubs, Linfield and Glentoran. The derby is also sometimes referred to as the Belfast derby. They are the two most successful and most supported clubs in Northern Irish Football. They traditionally face each other on Boxing Day each year which usually attracts the largest Irish Premiership attendance of the season. They regularly play each other in the league, and have contested more cup finals together than any other two clubs. They also make up two of the three clubs that have competed in every season of the Irish League's top flight since its inception in 1890 – neither club ever suffering relegation.

The 2016–17 NIFL Premiership was the ninth season of Northern Ireland's highest national football league in this format since its inception in 2008, the 116th season of Irish league football overall, and the fourth season of the league operating as part of the Northern Ireland Football League. The fixtures were announced on 7 July 2016. The season began on 6 August 2016 and ended on 29 April 2017, with the play-offs taking place in May 2017.