Plinian eruptions or Vesuvian eruptions are volcanic eruptions marked by their similarity to the eruption of Mount Vesuvius in 79 AD, which destroyed the ancient Roman cities of Herculaneum and Pompeii. The eruption was described in a letter written by Pliny the Younger, after the death of his uncle Pliny the Elder.

Plinian/Vesuvian eruptions are marked by columns of volcanic debris and hot gases ejected high into the stratosphere, the second layer of Earth's atmosphere. The key characteristics are ejection of large amount of pumice and very powerful continuous gas-driven eruptions. According to the Volcanic Explosivity Index, Plinian eruptions have a VEI of 4, 5 or 6, sub-Plinian 3 or 4, and ultra-Plinian 6, 7 or 8.

Short eruptions can end in less than a day, but longer events can continue for several days or months. The longer eruptions begin with production of clouds of volcanic ash, sometimes with pyroclastic surges. The amount of magma erupted can be so large that it depletes the magma chamber below, causing the top of the volcano to collapse, resulting in a caldera. Fine ash and pulverized pumice can deposit over large areas. Plinian eruptions are often accompanied by loud noises, such as those generated by the 1883 eruption of Krakatoa. The sudden discharge of electrical charges accumulated in the air around the ascending column of volcanic ashes also often causes lightning strikes as depicted by the English geologist George Julius Poulett Scrope in his painting of 1822.

The lava is usually dacitic or rhyolitic, rich in silica. Basaltic, low-silica lavas are unusual for Plinian eruptions; the most recent basaltic example[ citation needed ] is the 1886 eruption of Mount Tarawera on New Zealand's North Island. [1]

Pliny described his uncle's involvement from the first observation of the eruption: [2]

On August 24th, about one in the afternoon, my mother desired him to observe a cloud which appeared of a very unusual size and shape. He had just taken a turn in the sun and, after bathing himself in cold water, and making a light luncheon, gone back to his books: he immediately arose and went out upon a rising ground from whence he might get a better sight of this very uncommon appearance. A cloud, from which mountain was uncertain, at this distance (but it was found afterwards to come from Mount Vesuvius), was ascending, the appearance of which I cannot give you a more exact description of than by likening it to that of a pine tree, for it shot up to a great height in the form of a very tall trunk, which spread itself out at the top into a sort of branches; occasioned, I imagine, either by a sudden gust of air that impelled it, the force of which decreased as it advanced upwards, or the cloud itself being pressed back again by its own weight, expanded in the manner I have mentioned; it appeared sometimes bright and sometimes dark and spotted, according as it was either more or less impregnated with earth and cinders. This phenomenon seemed to a man of such learning and research as my uncle extraordinary and worth further looking into.

Pliny the Elder set out to rescue the victims from their perilous position on the shore of the Bay of Naples, and launched his galleys, crossing the bay to Stabiae (near the modern town of Castellammare di Stabia). Pliny the Younger provided an account of his death, and suggested that he collapsed and died through inhaling poisonous gases emitted from the volcano. His body was found interred under the ashes of the eruption with no apparent injuries on 26 August, after the plume had dispersed, confirming asphyxiation or poisoning. 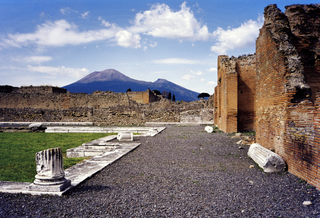 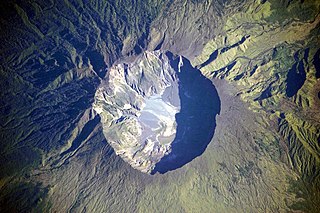 Mount Tambora, or Tomboro, is an active stratovolcano in the northern part of Sumbawa, one of the Lesser Sunda Islands of Indonesia. It was formed due to the active subduction zones beneath it, and before its 1815 eruption, it was more than 4,300 metres high, making it one of the tallest peaks in the Indonesian archipelago. 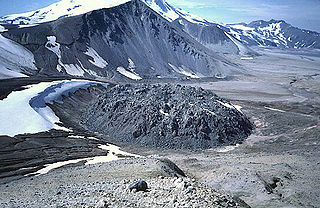 Novarupta is a volcano that was formed in 1912, located on the Alaska Peninsula in Katmai National Park and Preserve, about 290 miles (470 km) southwest of Anchorage. Formed during the largest volcanic eruption of the 20th century, Novarupta released 30 times the volume of magma of the 1980 eruption of Mount St. Helens.

Katla is a large volcano in southern Iceland. It is very active; twenty eruptions have been documented between 930 and 1918, at intervals of 20–90 years. It has not erupted violently for 102 years, although there may have been small eruptions that did not break the ice cover, including ones in 1955, 1999, and 2011. 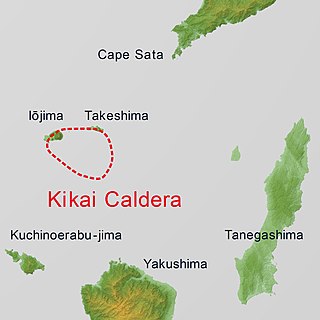 Kikai Caldera is a massive, mostly submerged caldera up to 19 kilometres (12 mi) in diameter in the Ōsumi Islands of Kagoshima Prefecture, Japan. 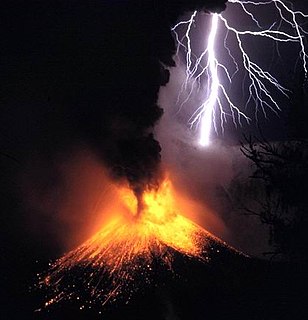 A pyroclastic fall is a uniform deposit of material which has been ejected from a volcanic eruption or plume such as an ash fall or tuff. Pyroclastic air fall deposits are a result of: 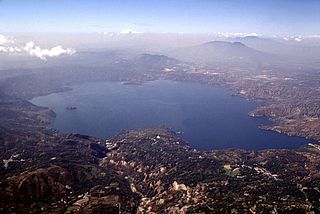 Lake Ilopango is a crater lake which fills an 8 by 11 km volcanic caldera in central El Salvador, on the borders of the San Salvador, La Paz, and Cuscatlán departments. The caldera, which contains the second largest lake in the country and is immediately east of the capital city, San Salvador, has a scalloped 100 m (330 ft) to 500 m (1,600 ft) high rim. Any surplus drains via the Jiboa River to the Pacific Ocean. An eruption of the Ilopango volcano is considered a possible source for the extreme weather events of 535–536. The local military airbase, Ilopango International Airport, has annual airshows where international pilots from all over the world fly over San Salvador City and Ilopango lake.

Mount Tarumae is located in the Shikotsu-Toya National Park in Hokkaidō, Japan. It is located near both Tomakomai and Chitose towns and can be seen clearly from both. It is on the shores of Lake Shikotsu, a caldera lake. Tarumae is a 1,041 metre active andesitic stratovolcano, with a lava dome.

Indonesia is a volcanically active country, containing numerous major volcanoes. It has the most volcanoes of any country in the world, with 76 volcanoes that have erupted at least 1,171 times in total within historical times. The Smithsonian Institution has 141 Indonesian entries in its volcano database. Indonesia has around 130 active volcanoes that are part of the Pacific Ring of Fire, and it has suffered the highest numbers of eruptions resulting in fatalities, damage to arable land, debris flows, tsunamis, lava domes, and pyroclastic flows. Indonesia's most active volcanoes are Kelut and Mount Merapi on the island of Java. The majority of Indonesia's volcano are located on a 3,000 km long chain called the Sunda Arc. Here, the subduction of the Indian Ocean crust underneath the Asian Plate produced most of these volcanoes. 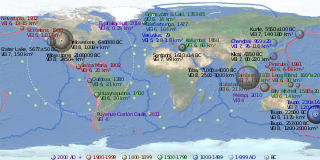 Of the many eruptions of Mount Vesuvius in Italy, the most famous is the eruption in 79 AD. This eruption is one of the deadliest in European history. 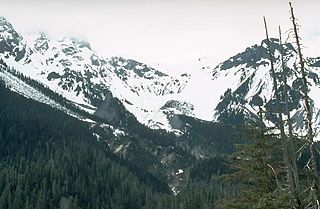