Rustington is a small town and civil parish in the Arun District of West Sussex. Rustington is approximately at the midpoint of the West Sussex coast and midway between the county town of Chichester and Brighton. The A259 runs along the north of Rustington, westward to Littlehampton, Bognor Regis and Chichester, and east to Worthing and Brighton. The area forms part of the Brighton and Hove built-up area.

With a population of over 14,000 in 2014, it has the size and facilities of a small town, including a shopping area with a mix of independent and chain stores. The parish of Rustington includes the neighbourhood of West Preston.

Rustington was in World War I home to a planned American aerodrome, to the east of the High Street. Intended to launch bombing raids against Germany, the airfield was incomplete when the war ended. [2] [3] [4]

Rustington contains a conservation area which extends from the south end of North Lane to The Lamb in The Street. Here, where trees are protected, are the largest number of pre-1850 listed buildings in the post town, with The Street and surrounding roads containing some of the finest 17th and 18th century Sussex flint cottages in West Sussex, some of which are thatched.

There is a village information centre at the Broadmark Lane car park, housed in the recently renovated WRVS building in the Waitrose car park. It also houses Rustington Museum, exploring the village's history from the Stone Age to the modern day with artefacts from throughout time.

Rustington competes annually in the South-East in Bloom competition. It holds an annual carnival and fête in August. Close to Christmas Eve, Rustington has a village carol concert which is free for local residents and features local school children accompanied by the Littlehampton Concert Band.

Rustington adjoins the English Channel, and is up to 7 metres (23 ft) above Ordnance Datum. It has three main recreation grounds and neither woodland nor fields. [5]

In music, literature and the media

"Rustington" is a well-known hymn tune by Hubert Parry, who lived and died in Rustington.

Rustington achieved national fame in 1956 with the launch of Flanders and Swann's show At the Drop of a Hat , in which "The Gnu Song" contains the lines:

I had taken furnished lodgings down at Rustington-on-Sea Whence I travelled on to Ashton-Under-Lyne...

Rustington has independent shops such as butchers, greengrocers and bakers. It has some major banks and a post office serving a population of 40,000. Pedestrianised areas benefit the Churchill Court Shopping Courtyard. On display in the high street is a large Late Ice Age erratic boulder; this was brought to Rustington on ice during the last Ice Age. It was re-discovered in a local field named Stonefield having been used as a boundary marker for many years. Rustington also has a retail park on the A259 road.

Rustington has an amateur football club Rustington F.C. who play at the Recreation Ground. Also a cricket club based on the same ground and play throughout the summer with two teams on Saturdays and one on Sundays. In 2006, they didn't lose a single match, earning them a mention on Sky Sports News on New Year's Eve. In 2017 the club celebrated its 125 Anniversary. The Saturday teams play in the West Sussex Invitation League and in 2016 the first eleven won the Division 4 title. There is also a thriving table tennis club , Woodlands TTC who are based at The Woodlands Centre who meet on Tuesdays and Thursdays.

Rustington shares Angmering railway station with Angmering and East Preston. Trains from this station go to Brighton and Portsmouth/Southampton, as well as regular services to London.

Bus services to Brighton and Portsmouth are provided by the Coastliner 700 with many stops within the village itself.

To celebrate, on 7 September 1996, Neville Duke returned to Rustington to unveil a plaque, marking the event, joined by a Gloster Meteor and a Hawker Hunter, which flew over the sea front.

Littlehampton is a town, seaside resort and pleasure harbour, and the most populous civil parish in the Arun District of West Sussex, England. It lies on the English Channel on the eastern bank of the mouth of the River Arun. It is 51.5 miles (83 km) south south-west of London, 19 miles (31 km) west of Brighton and 10 miles (16 km) east of the county town of Chichester.

Angmering is a village and civil parish between Littlehampton and Worthing in West Sussex on the southern edge of the South Downs National Park, England; about two-thirds of the parish fall within the Park. It is 1.5 miles (2.4 km) north of the English Channel; Worthing and Littlehampton are 3.5 miles (5.6 km) to the east and west respectively. It has been inhabited since the Bronze Age and there are the remains of a Roman Villa and bath house. In 1976, Angmering was twinned with the Normandy town of Ouistreham on the "Riva-Bella", the location of the World War II Normandy Landings' Sword Beach.

Clapham is a rural village and civil parish in the Arun District of West Sussex, England. It lies on varying downslopes and escarpment of the South Downs National Park three miles (5 km) north of Angmering on the A280 road and north of the A27 crossroads. It is adjacent to the village of Patching.

East Preston is a village and civil parish in the Arun District of West Sussex, England. It lies roughly halfway between Littlehampton and Worthing. 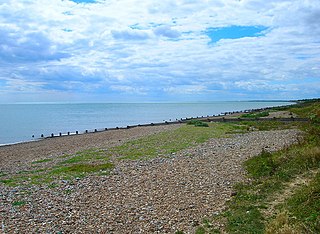 Kingston or Kingston by Ferring, is a small civil parish in the Arun District of West Sussex, England. It is a combination of a farmed rural interior and the three neighbourhoods of East Kingston, West Kingston and Kingston Gorse. The parish lies on the coast, between Ferring and East Preston parishes. 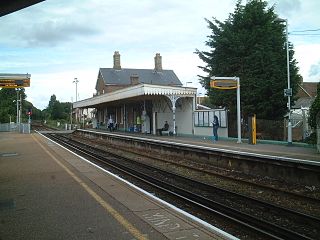 Angmering is a railway station on the West Coastway Line, on the border of Angmering and East Preston in the district of Arun. It was opened in 1846. The station itself is situated about 0.6 miles (1 km) away from the centre of Angmering village, and is 15 miles 44 chains (25.0 km) down the line from Brighton. Buses depart for Angmering village hourly, or walking to the village takes about 20 minutes. The station is located near the local secondary school The Angmering School, some of the students of which use the station daily to travel to and from school. Angmering station is also designed to be used by the residents of the nearby villages of Rustington and East Preston, with some of the station's signage actually reading 'Angmering for Rustington and East Preston'.

Shoreham was a parliamentary constituency centred on the town of Shoreham-by-Sea in West Sussex. It returned one Member of Parliament (MP) to the House of Commons of the Parliament of the United Kingdom from 1974 to 1997.

Worthing Rural District was a rural district in West Sussex, England from 1933 to 1974. It comprised an area to the north, west and east, but did not include the borough of Worthing. Its area encompassed the land in southern Sussex between the Rivers Adur and Arun, with the exception of Arundel, Littlehampton and Worthing itself. The rural district had its council offices at 15 Mill Road, West Worthing, Worthing. 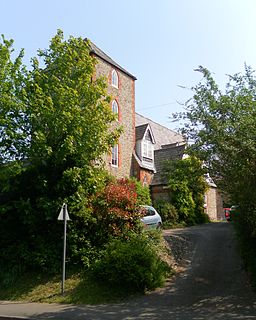 The present Angmering Baptist Church and its predecessor building, known as Church of Christ, are respectively the current and former Baptist places of worship in Angmering, a village in the Arun district of West Sussex, England. Baptist worship in the area can be traced back to 1846, when the "strangely towered" Church of Christ was founded and built. After the Gothic-style chapel became unsuitable for modern requirements, the congregation acquired a nearby barn and converted it into a new church, after which the old building was sold for residential conversion. The church has been designated a Grade II listed building. 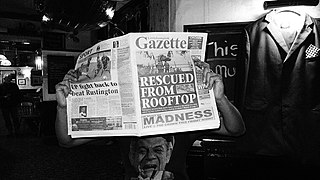 The Littlehampton Gazette is a British local newspaper, serving the West Sussex town of Littlehampton and surrounding towns and villages such as Angmering, Arundel, Clapham, East Preston, Patching and Rustington. It is a weekly newspaper published on Thursdays, and has been published since 1893, although from 1977 until 1990 it was renamed the Arun Gazette.

St Catherine's Church is a Roman Catholic Parish church in Littlehampton, West Sussex, England. It was founded in 1862, built in stages afterwards and designed by Matthew Ellison Hadfield. It is situated on Beach Road backing on to St Catherine's Road in the centre of the town. It is a Gothic Revival church and a Grade II listed building.

The 2018–19 Southern Combination Football League season was the 94th in the history of the competition, which lies at levels 9 and 10 of the English football league system.

The 2019–20 Southern Combination Football League season was the 95th in the history of the competition, which lies at levels 9 and 10 of the English football league system.

The 2020–21 Southern Combination Football League season was the 96th in the history of the competition, which lies at levels 9 and 10 of the English football league system. This season also marked 100 years since the league was first formed, with Eastbourne Town, Newhaven and Shoreham being the only teams still in the league to have played in the first season.