Sandown Park is a horse racing course and leisure venue in Esher, Surrey, England, located in the outer suburbs of London. It hosts 5 Grade One National Hunt races and one Group 1 flat race, the Eclipse Stakes. It regularly has horse racing during afternoons, evenings and on weekends, and also hosts many non racing events such as trade shows, wedding fairs, toy fairs, car shows and auctions, property shows, concerts, and even some private events. It was requisitioned by the War Department from 1940-1945 for World War II. The venue has hosted bands such as UB40, Madness, Girls Aloud, Spandau Ballet and Simply Red. The racecourse is close to Esher railway station served by trains from London Waterloo. There is a secondary exit from Esher station which is open on race days, this exit leads directly into the racecourse and Lower Green, Esher. [1]

Sandown Park was one of the first courses to charge all for attending. It opened in 1875 and everyone had to pay at least half a crown. The first meeting was over three days, starting on Thursday 22 April, and included the Grand National Hunt Chase, now staged at the Cheltenham Festival. The Grand International Steeple Chase took place on the Saturday, worth £2,130 to the winner, and was the largest prize for a steeplechase that season, unusually even eclipsing that for the Liverpool Grand National. [2]

In 1875, Sandown became the first course in England to have a members' enclosure. [3] 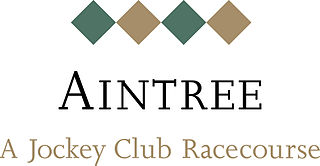 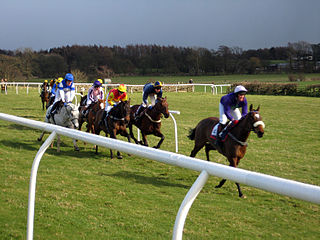 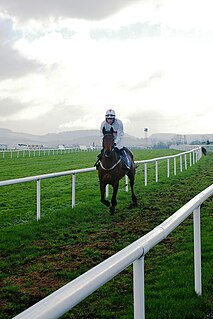 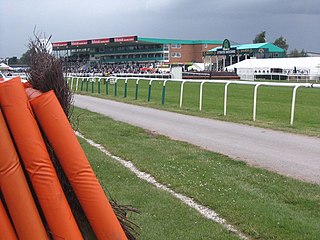 Carlisle Racecourse is a thoroughbred horse racing venue located in the village of Blackwell near Carlisle in Cumbria, England. The course has been on its present site since 1904, when it moved there from another location nearer to Carlisle. The course is 1 mile and 4 furlongs (2.41 km) in circumference, right-handed, and hosts flat racing in the summer and National Hunt racing over the winter months. The last half mile is up a steep incline. The going can get very heavy in the winter.

Fakenham Racecourse is a thoroughbred horse racing venue located south of Fakenham, Norfolk, England. The Prince of Wales is patron.

Windsor Racecourse, also known as Royal Windsor Racecourse, is a thoroughbred horse racing venue located in Windsor, Berkshire, England. It is one of only two figure-of-eight courses in the United Kingdom, the other being at Fontwell Park. 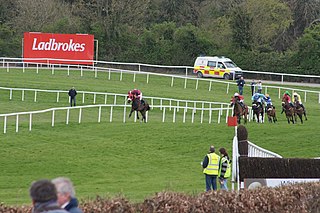 Punchestown Racecourse is located in the parish of Eadestown, between the R410 and R411 regional roads near Naas, County Kildare, in Ireland. It is known as the home of Irish Jumps Racing and plays host to the annual Punchestown Irish National Hunt Festival. The racecourse itself is right-handed with an undulating hurdle and steeplechase track. The hurdle course is one mile six furlongs in distance while the chase course is 2 miles. Punchestown Racecourse also has the only cross country banks course in Ireland.

Anthony Bingham Mildmay, 2nd Baron Mildmay of Flete was a celebrated amateur steeplechaser, who raced in the Grand National. He also inspired the Queen Mother's interest in National Hunt racing.

Naas Racecourse is a horse racing venue in Naas, County Kildare, Ireland, approximately 18 miles from Dublin. The course stages both Flat racing and National Hunt racing and in 2010 fifteen race meetings were held there.

Charter Party was an Irish-bred British-trained thoroughbred racehorse, best known for his win in the 1988 Cheltenham Gold Cup. He overcame persistent injury problems to win twelve races under National Hunt rules. He showed promise as a hurdler and as a Novice steeplechaser before recording his first major win in the 1986 National Hunt Handicap Chase. As a ten-year-old in 1988 he defeated Desert Orchid in the Gainsborough Chase, before taking the Gold Cup at Cheltenham in March. He never won again, but produced a fine effort to finish third on heavy ground in the 1989 Gold Cup.

Silver Fame was a British Thoroughbred racehorse who won the 1951 Cheltenham Gold Cup. After beginning his racing career in Ireland he moved to England and became one of the leading steeplechasers of his time. He won races at the Cheltenham Festival in 1948 and 1950 and ran twice in the Grand National, falling when favourite for the race in 1948. Despite running extremely well at Cheltenham he did not contest the Gold Cup until 1951 when he won the race in record time. He was also the oldest winner of the race up to that time, and remains one of only two horses to win the race at the age of twelve. He spent his retirement as a hunter.