Sullivans Creek, a partly perennial stream of the Murrumbidgee catchment within the Murray-Darling basin, is located in Canberra, Australian Capital Territory, Australia.

Sullivans Creek rises close to the border between the Australian Capital Territory (ACT) and New South Wales, north-east of Kenny, and north-west of Watson. The creek is formed by runoff from Mount Majura, Mount Ainslie, O'Connor Ridge and Black Mountain. [3] Sullivans Creek flows generally south-west, through a small channel within a much larger older gully system in its upper reaches; and through a series of urban sealed stormwater channels in its middle reaches; before reaching the grounds of the Australian National University, towards its confluence with the Molonglo River near Acton. Molonglo River is now dammed as Lake Burley Griffin. The creek has a catchment area of 52 square kilometres (20 sq mi) [4] and is approximately 13 kilometres (8.1 mi) long. [1]

The creek was originally called Canberry (or Canburry) Creek, since early European settlement in the area, from 1823. During the 1850s, William Sullivan and his family acquired grazing land surrounding the creek, and at some stage thereafter, the creek name was changed to Sullivans Creek. Within the grounds of the Australian National University, the creek's original course has been altered to accommodate growth of the campus and enhance the natural landscape. Within the Acton campus, two bridges cross Sullivans Creek; MacPherson's Bridge, that was named after the original landowner, John MacPherson, and Canberry Bridge. [1]

Following heavy rains during 2012 that caused minor flooding of Sullivans Creek, it was reported that people were rafting along the course of the creek, within the grounds of the Australian National University. [5]

After flooding was caused by heavy rains in 2018, all of the books on the lower levels of the ANU's Chifley Library were destroyed by the overflow. [6] [7]

The history of Canberra details the development of the city of Canberra from the time before European settlement to the city's planning by the Chicago architect Walter Burley Griffin in collaboration with Marion Mahony Griffin, and its subsequent development to the present day.

Lake Burley Griffin is an artificial lake in the centre of Canberra, the capital of Australia. It was completed in 1963 after the Molonglo River—which ran between the city centre and Parliamentary Triangle—was dammed. It is named after Walter Burley Griffin, the American architect who won the competition to design the city of Canberra.

Acton is a suburb of Canberra, ACT, Australia. Acton covers an area west of the CBD, bordered by Black Mountain to the west and Lake Burley Griffin in the south. The Australian National University campus covers most of the suburb, though also located in Acton is the National Film and Sound Archive, a branch of the CSIRO and the National Museum of Australia. 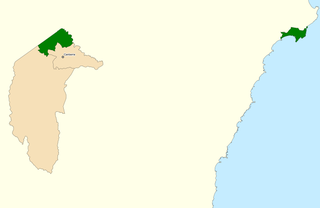 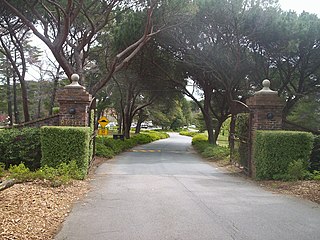 Lennox Gardens, a park in Canberra, Australia, lying on the south side of Lake Burley Griffin, close to Commonwealth Avenue Bridge and Albert Hall in the suburb of Yarralumla. Before the construction of Lake Burley Griffin a road ran through the present garden, this road being one of two main crossing points across the Molonglo River. The name of the road was Lennox Crossing from which the present garden takes its name. The northern segment of the road is still present on Acton peninsula. The garden was officially named in 1963. Lennox Crossing was named after David Lennox, an early bridge builder in NSW and Victoria. 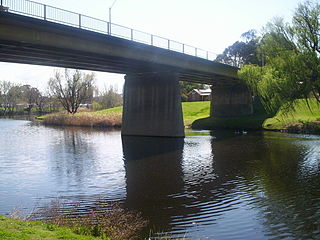 The Queanbeyan River, a perennial stream that is part of the Molonglo catchment within the Murray–Darling basin, is located in the Monaro and Capital Country regions of New South Wales and the Australian Capital Territory, in Australia. The river is 104 kilometres (65 mi) in length with a catchment area of 96,000 hectares. The Queanbeyan River and the Cotter River meet the potable water supply needs of the Canberra and Queanbeyan region and whose water quality is specifically protected under Federal legislation.

The Molonglo Plain generally refers to the flood plain of the Molonglo River and specifically the one located in the Australian Capital Territory that was inundated during the mid-1960s in order to create Lake Burley Griffin. This plain was one of fours plains - the Ginninderra Plain, the Limestone Plain, and the Tuggeranong Plain are the others - upon which the city of Canberra is situated. 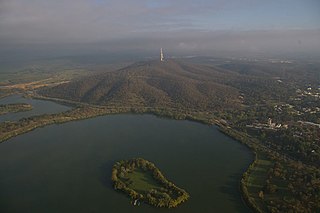 Scrivener Dam, a concrete gravity dam that impounds Molonglo River, is located in Canberra, Australian Capital Territory, Australia. The dam creates Lake Burley Griffin, that was established for recreational and ornamental purposes. Named in honour of surveyor, Charles Scrivener, the dam was officially inaugurated on 20 September 1964 and the official filling of the lake commemorated on 17 October 1964, by the Prime Minister, Robert Menzies. 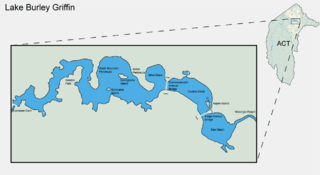 The history of Lake Burley Griffin, an artificial body of water in Canberra, the capital of Australia, is a long one. Following its initial design in the 1910s, extensive political disputes occurred until it was finally built in the 1960s.

The Acton Peninsula is located on the northern shore of Lake Burley Griffin, in the centre of Canberra, the capital of Australia.

Jerrabomberra Creek, a partly perennial stream of the Murrumbidgee catchment within the Murray-Darling basin, is located in the Capital Country region spanning both New South Wales and the Australian Capital Territory, Australia.

Scott's Crossing Road was a former roadway connecting north and south Canberra, across the Molonglo River floodplain. It was named after John Scott, who was an early settler in the region, and whose homestead was located at its southern end. It was submerged by the filling of Lake Burley Griffin.

The Australian National University Boat Club is the rowing club of Australian National University and is based in Canberra, Australia, on the lower reaches of Sullivan's Creek, two hundred metres from the Lake Burley Griffin. Founded in 1964, the ANU Boat Club is Canberra's oldest rowing club. The present club boathouse has been located on the banks of Sullivan's creek since 1971.

The division of Canberra was one of the two electorates of the unicameral Australian Capital Territory House of Assembly. It elected 9 members in 1975 and 1979, and 10 members in 1982. It was named for the city of Canberra, Australia's national capital, and included the districts of Tuggeranong, Weston Creek and Woden Valley, along with the rest of the ACT south of the Molonglo River and Lake Burley Griffin.