Telephone numbers in Åland use ranges owned by Finland.

ÅMT has a domestic roaming agreement at no cost to the user with operator Elisa in mainland Finland. This agreement is reciprocal except for Elisa's prepaid customers under the Saunalahti brand. Operator Telia Finland's LTE/3G/GSM network covers both mainland Finland and Åland. [1] The ÅMT numbers are not portable to other mobile operators. 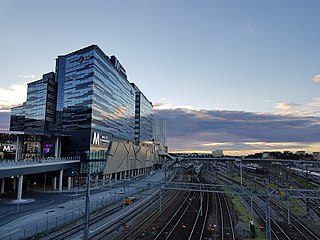 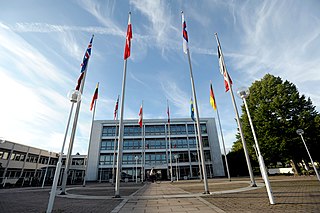 Mariehamn is the capital of the Åland Islands, an autonomous territory under Finnish sovereignty. Mariehamn is the seat of the Government and Parliament of Åland, and 40% of the population of Åland live in the city. It is mostly surrounded by Jomala, the second largest municipality in Åland in terms of population; to the east it is bordered by Lemland. Like all of Åland, Mariehamn is unilingually Swedish-speaking and around 88% of the inhabitants speak it as their native language.

Tele2 AB is a European telecommunications operator headquartered in the Kista Science City, Stockholm, Sweden. It is a major telephone operator in the Nordic and Baltic countries and an alternative provider in many others, with about 17 million customers in 8 countries and under franchise in 1 additional countries.

Elisa Oyj is a Finnish telecommunications company founded in 1882. Its previous names were Helsingin Puhelin and Elisa Communication Oyj. Elisa is a telecommunications, ICT and online service company operating mainly in Finland and Estonia, but it also offers digital services for international markets. It has over 6.2 million consumer, corporate and public administration organisation subscriptions. In Finland, Elisa is the market leader in mobile and fixed network subscriptions while in Estonia it is the second largest mobile network operator. Elisa provides environmentally sustainable services for communication and entertainment, and tools for improving operating methods and productivity of organisations. It is cooperating with Vodafone. Elisa offers fixed and mobile subscriptions and broadband subscriptions under Elisa and Elisa Saunalahti brands. Other services include cable-tv-subscriptions. Elisa's new digital services are among others Elisa Viihde, Elisa Kirja, Elisa Videra, Elisa Automate and Elisa Smart Factory.

Radiolinja was a Finnish GSM operator founded on September 19, 1988. On March 27, 1991, the world's first GSM phone call was made on Radiolinja's network. The network was opened for commercial use on July 1, 1991.

IFK Mariehamn is an Ålandic football club based in Mariehamn, the capital of the Åland Islands. It plays in the Finnish Premier Division (Veikkausliiga). The club is managed by Lukas Syberjyski, and it plays its home matches at Wiklöf Holding Arena. 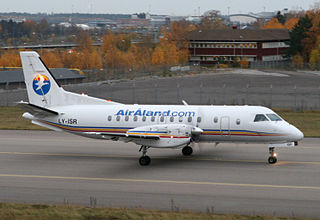 Air Åland AB was the provincial airline of Åland, with its head office on the grounds of Mariehamn Airport in Mariehamn, Åland, Finland. It operated scheduled services from Åland to Helsinki and Stockholm. Its main base was Mariehamn Airport. Starting from 1 July 2012, its operations were handed over to the Sweden-based company NextJet.

LMT is a mobile GSM/UMTS/LTE operator in Latvia.

DNA Oyj is a Finnish telecommunications group that provides voice, data and TV services. In December 2019, it had more than 4 million subscription customers. 2.8 million of the customers were using a mobile network and 1.24 million were using a fixed network. DNA is a wholly owned subsidiary of Telenor.

Åland is an archipelago of over 6,000 islands in the Baltic Sea. Constitutionally, it is a Swedish-speaking autonomous province of Finland. Sea travel is a vital part of Åland's economy and a major local employer. The main ports are located at the capital Mariehamn in the south, at Berghamn in the west and at Långnäs on the east shore of Fasta Åland.

Bank of Åland Plc is a Finnish commercial bank and banking group with over 700 employees and operations in Åland, Finland and Sweden. The bank was founded in 1919 and was listed on the stock exchange in 1942. Its president and CEO is Peter Wiklöf. 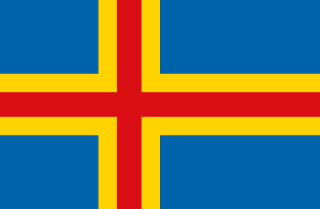 The following outline is provided as an overview of and topical guide to the Åland Islands:

Åland is an archipelago at the entrance to the Gulf of Bothnia in the Baltic Sea belonging to Finland. It is an autonomous and demilitarised region of Finland since 1920 by a decision of the League of Nations, and is Finland's only monolingually Swedish-speaking region. It is the smallest region of Finland, constituting 0.51% of its land area and 0.54% of its population. Mariehamn is the capital city of Åland.

Ålcom is a local provider of 2G GSM, 3G UMTS and 4G LTE mobile; fixed telephony, broadband, ISP services and IPTV in the autonomous Finnish region of the Åland Islands. Ålcom mobile subscribers also have full access to Elisa's mobile network when on domestic roaming in mainland Finland. Ålcom is also a full member of the Finnet (fi) group of telephone cooperatives. 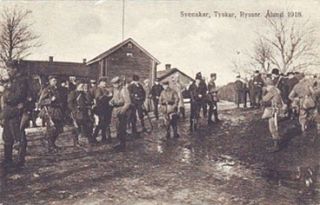 The Invasion of Åland was a 1918 military campaign of World War I in the Åland Islands, Finland. The islands, still hosting Soviet Russian troops, were first invaded by Kingdom of Sweden in late February and then by the German Empire in early March. The conflict was also related to the Finnish Civil War including minor fighting between the Finnish Whites and the Finnish Reds.

The Western Harbour is one of two harbours in the port of Mariehamn, the regional capital of Åland, in the Archipelago Sea part of the Baltic.