The Right Reverend Thomas Arnold Scott was an Anglican missionary bishop in China during the first half of the twentieth century.

Leeds Grammar School was an independent school in Leeds, West Yorkshire, England. In August 2005 it merged with Leeds Girls' High School to form The Grammar School at Leeds. The two schools physically united in September 2008.

Felsted School is an English co-educational day and boarding independent school, situated in Felsted in Essex, England. It is in the British public school tradition, and was founded in 1564 by Richard Rich, 1st Baron Rich. Felsted is one of the 12 founder members of the Headmasters' and Headmistresses' Conference, and a full member of the Round Square Conference of world schools. Felsted School has been awarded the Good Schools Guide award twice and is regularly featured in Tatler's Schools Guide.

Christ's College is a constituent college of the University of Cambridge. The college includes the Master, the Fellows of the College, and about 450 undergraduate and 170 graduate students. The college was founded by William Byngham in 1437 as God's House. In 1505, the college was granted a new royal charter, was given a substantial endowment by Lady Margaret Beaufort, and changed its name to Christ's College, becoming the twelfth of the Cambridge colleges to be founded in its current form. The college is renowned for educating some of Cambridge's most famous alumni, including Charles Darwin and John Milton.

Charles John Corfe was the inaugural Anglican Bishop in Korea from 1889. 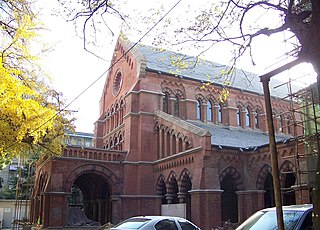 Chung Hua Sheng Kung Hui, known in English as the Holy Catholic Church in China or Anglican-Episcopal Province of China, was the name of the Anglican church in China from 1912 to until about 1958.

St John Basil Wynne Willson was an Anglican bishop in the first half of the 20th century. He was the Bishop of Bath and Wells from 1921 to 1937.

David Goodwin Loveday was an Anglican bishop during the second half of the 20th century.

The Rt Rev William Wilson Cash DSO OBE DD was an Anglican Bishop in the middle part of the 20th century.

Richard Brook was an Anglican bishop in the 20th century.

The Rt Rev Rollestone Sterritt Fyffe DD was the fourth Bishop of Rangoon. 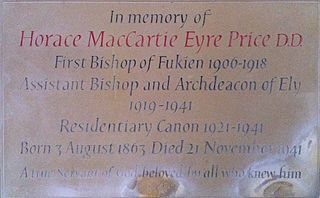 Horace MacCartie Eyre Price was a missionary of the Anglican Church.

James Thomas Hayes was Bishop of Trinidad and Tobago from 1889 until his death in 1904.

The Right Reverend Geoffrey Durnford Iliff was an Anglican missionary bishop in China from 1903 to 1920.

The Right Reverend John Wellington was an Anglican missionary bishop in China during the first half of the 20th century.