Fuzhou, formerly romanized as Foochow, is the capital and one of the largest cities in Fujian province, China. Along with the many counties of Ningde, those of Fuzhou are considered to constitute the Mindong linguistic and cultural area.

Shanghai is one of the four municipalities under the direct administration of the central government of the Republic of China, the largest city in China by population, and the second most populous city proper in the world, with a population of 24.18 million as of 2017. It is a global financial centre and transport hub, with the world's busiest container port. Located in the Yangtze River Delta, it sits on the south edge of the estuary of the Yangtze in the middle portion of the West China coast. The municipality borders the provinces of Jiangsu and Zhejiang to the south, east and west, and is bounded to the east by the South China Sea.

The Nanjing Union Theological Seminary is the flagship theological seminary of Protestant Christianity in China today. It is managed by the China Christian Council.

North China Theological Seminary was one of the largest and well-known fundamentalist Protestant seminaries in mainland China in the first half of the twentieth century. It was founded in 1919 and was eventually merged into Nanjing Union Theological Seminary after the establishment of the People's Republic of China.

Qingzhou, formerly Yidu County (益都县), is a county-level city, which is located in the west of the prefecture-level city of Weifang, in the central part of Shandong Province, China. Qingzhou is a dynamic industry city, and also grows a great number of farm products. The local government holds an open policy of introduction of foreign capital, and has established strong business relationships with more than fifty countries and regions.

Trinity College may refer to: 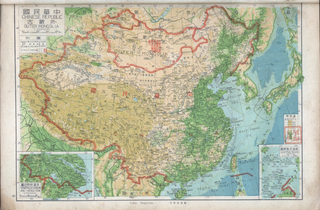 Postal romanization was a system of transliterating Chinese place names developed by the Imperial Post Office in the early 1900s. The system was in common use until the 1980s, when it was largely replaced by Hanyu Pinyin.

Cheeloo University was a university in China, established by Hunter Corbett American Presbyterian, and other English Baptist, Anglican, and Canadian Presbyterian mission agencies in early 1900 in China.

John W. Gowdy was a Scottish American bishop of the Methodist Episcopal Church and The Methodist Church, elected in 1930. He also distinguished himself as a missionary, an educator, and as a college and university president.

The Baptist Convention of Hong Kong is a cooperative association of Baptist churches in the Hong Kong.

The Chinese Baptist Convention is a cooperative association of Baptist churches in Taiwan and the territories administered by the Republic of China.

Lewis Strong Casey Smythe [pronounced "Smith"] was a sociologist and an American Christian missionary to China who was present during the Nanking Massacre.

George Carleton Lacy was an American Methodist missionary and the last Methodist Bishop in Mainland China.

The following is a timeline of the history of the city of Fuzhou, Fujian Province, China.

The United Board for Christian Higher Education in Asia is an organization founded in 1922 that supports whole person education in colleges and universities in Asia. The Board is a 501(c)(3) organization incorporated in the State of New York, and is also a registered charity in Hong Kong. It collaborates with higher education institutions in 15 countries and regions of Asia, both conducting program, and making grants. It began its work China.

Frank Joseph Rawlinson born in Langham, Rutland County, England, was an American Protestant missionary to China from 1902 to 1937 known for his theologically liberal views, openness to Chinese culture, and support for Chinese nationalism. From 1912 to 1937 he was editor of The Chinese Recorder and Missionary Journal, published in Shanghai, the leading English language journal of the Protestant missionary community.

Chow Lien-hwa was a Chinese Baptist minister, missionary, and theologian.