"Three versions of Judas" (original Spanish title: "Tres versiones de Judas") is a short story by Argentine writer and poet Jorge Luis Borges. It was included in Borges' anthology, Ficciones , published in 1944. Like several other Borges stories, it is written in the form of a scholarly article. The story carries three footnotes and quotes many people, some of which are real (like Antônio Conselheiro), some have been concocted from real life (like Maurice Abramowicz, who was once his classmate, and later became a deputy for the Swiss communist party, but is made a French religious philosopher in the story [1] ) and some are completely fictitious (like Jaromir Hladík, who is a character from his own story "The Secret Miracle").

The story begins as a critical analysis of works of a fictitious writer Nils Runeberg. Nils Runeberg lives in the city of Lund, where he publishes two books: Kristus och Judas (1904) [Christ and Judas] and his magnum opus Den hemlige Frälsaren (1909) [The secret Savior]. Borges analyses these two works (three if the revised edition of Kristus och Judas is counted separately) and discusses their heretical conclusions without providing the "dialectic or his (Nils Runeberg) proofs". The story ends with the death of Nils Runeberg.

The three versions of Judas 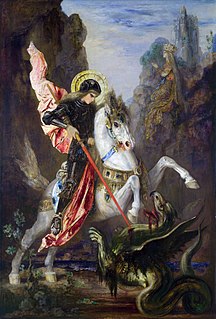 Christian mythology is the body of myths associated with Christianity. The term encompasses a broad variety of legends and narratives, especially those considered sacred narratives. Mythological themes and elements occur throughout Christian literature, including recurring myths such as ascending to a mountain, the axis mundi, myths of combat, descent into the Underworld, accounts of a dying-and-rising god, a flood myth, stories about the founding of a tribe or city, and myths about great heroes of the past, paradises, and self-sacrifice. 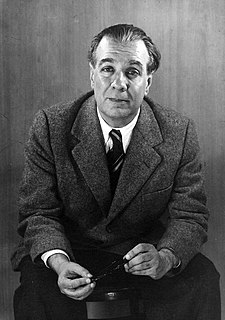 Jorge Francisco Isidoro Luis Borges Acevedo was an Argentine short-story writer, essayist, poet and translator, and a key figure in Spanish-language and international literature. His best-known books, Ficciones (Fictions) and El Aleph, published in the 1940s, are compilations of short stories interconnected by common themes, including dreams, labyrinths, philosophers, libraries, mirrors, fictional writers, and mythology. Borges's works have contributed to philosophical literature and the fantasy genre, and influenced the magic realist movement in 20th century Latin American literature. His late poems converse with such cultural figures as Spinoza, Camões, and Virgil. 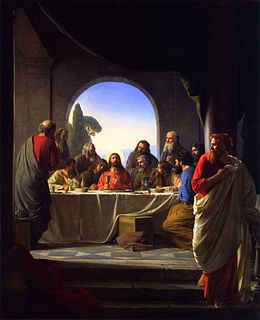 Judas Iscariot was a disciple and one of the original Twelve Apostles of Jesus Christ. According to all four canonical gospels, Judas betrayed Jesus to the Sanhedrin in the Garden of Gethsemane by kissing him and addressing him as "rabbi" to reveal his identity in the darkness to the crowd who had come to arrest him. His name is often used synonymously with betrayal or treason. In Christianity, Judas is seen as an antagonist. Judas's epithet "Iscariot" most likely means he came from the village of Kerioth, but many other possibilities have been suggested. 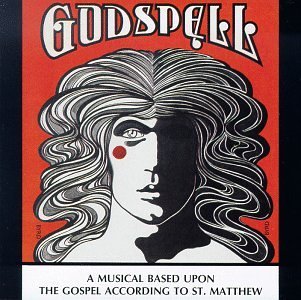 Godspell is a musical composed by Stephen Schwartz with the book by John-Michael Tebelak. The show opened off-Broadway on May 17, 1971, and has since been produced by multiple touring companies and in many revivals. The 2011 revival played on Broadway from October 13, 2011, through June 24, 2012. 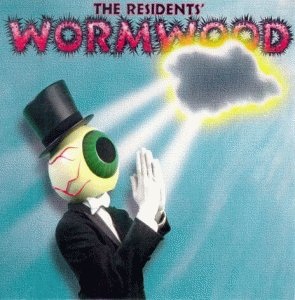 Wormwood: Curious Stories from the Bible is a concept album released in 1998 by avant-garde musicians The Residents. The album's purpose is to retell some of the more "curious" stories in the Bible, not to condemn the stories, but to give a greater understanding to them.

A fictional book is a text created specifically for a work in an imaginary narrative that is referred to, depicted, or excerpted in a story, book, film, or other fictional work, and which exists only in one or more fictional works. A fictional book may be created to add realism or depth to a larger fictional work. For example, George Orwell's novel Nineteen Eighty-Four has excerpts from a book by Emmanuel Goldstein entitled The Theory and Practice of Oligarchical Collectivism which provides background on concepts explored in the novel. 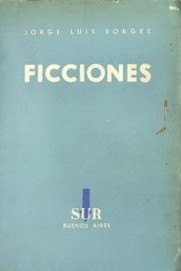 Ficciones is a collection of short stories by Argentine writer and poet Jorge Luis Borges, originally written and published in Spanish between 1941 and 1956. Thirteen stories from Ficciones were first published by New Directions in the English-language anthology Labyrinths (1962). In the same year, Grove Press published the entirety of the book in English using the same title as in the original language. "The Approach to Al-Mu'tasim" originally appeared published in A History of Eternity (1936). Ficciones became Borges's most famous book and made him known worldwide. 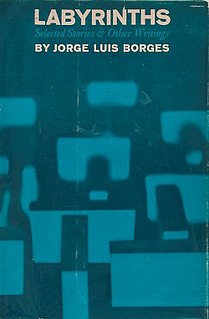 Labyrinths is an anthology of short stories and essays by the writer Jorge Luis Borges. It was translated into English, published soon after Borges won the International Publishers' Prize with Samuel Beckett. 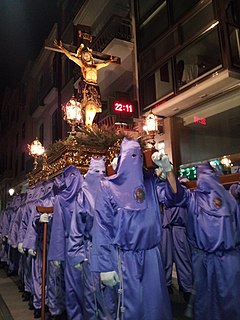 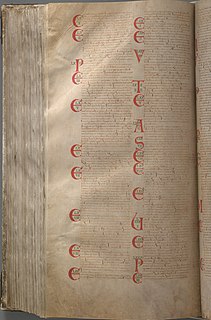 Mark 14 is the fourteenth chapter of the Gospel of Mark in the New Testament of the Christian Bible. It contains the plot to kill Jesus, his anointing by a woman, the Last Supper, predictions of his betrayal, and Peter the Apostle's three denials of him. It then begins the Passion of Jesus, with the garden of Gethsemane and Judas Iscariot's betrayal and Jesus' arrest, followed by Jesus' trial before the Sanhedrin and Peter's denials of Jesus.

The Gospel of Judas is a non-canonical Gnostic gospel. The content consists of conversations between Jesus and Judas Iscariot. Given that it includes late 2nd-century theology, it is widely thought to have been composed in the 2nd century by Gnostic Christians, rather than the historic Judas himself. The only copy of it known to exist is a Coptic language text that has been carbon dated to 280 AD, plus or minus 60 years. It has been suggested that the text derives from an earlier manuscript in the Greek language. An English translation was first published in early 2006 by the National Geographic Society. 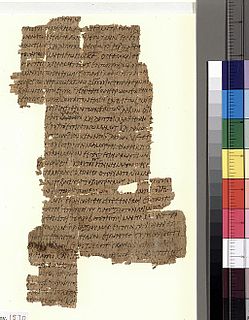 Matthew 26 is the 26th chapter of the Gospel of Matthew, part of the New Testament of the Christian Bible. This chapter covers the beginning of the Passion of Jesus narrative, which continues to Matthew 28; it contains the narratives of the Jewish leaders' plot to kill Jesus, Judas Iscariot's agreement to betray Jesus to Caiphas, the Last Supper with the Twelve Apostles, the Agony in the Garden of Gethsemane and the subsequent vindication of Jesus' predictions. 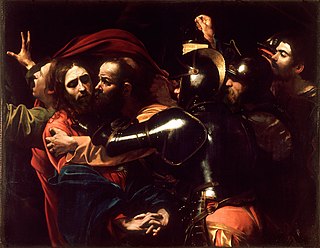 The arrest of Jesus was a pivotal event in Christianity recorded in the canonical gospels. It occurred shortly after the Last Supper, and immediately after the kiss of Judas, which is traditionally said to have been an act of betrayal since Judas made a deal with the chief priests to arrest Jesus. The event ultimately led, in the Gospel accounts, to Jesus' crucifixion.

In hadith studies, Israʼiliyyat are narratives assumed to be of foreign import. Although indicating such stories develop from Jewish sources, narratives designated as Isra'iliyyat might also derive from other religions such as Christianity or Zoroastrianism. Isrā'īlīyāt were received varyingly by both early and later Muslim scholars, with early prophetic traditions criticising their details yet encouraging their transmission. Many pre-modern scholars enthusiastically used them, while many Arab scholars in modern times have called them unislamic.

Biathanatos is a work by the English writer and clergyman John Donne. Written in 1608 and published after his death, it contains a heterodox defense of "self-homicide" (suicide), listing prominent Biblical examples including Jesus, Samson, Saul, and Judas Iscariot. Thomas De Quincey responds to the work in his "On Suicide", and Jorge Luis Borges responds in "Biathanatos". 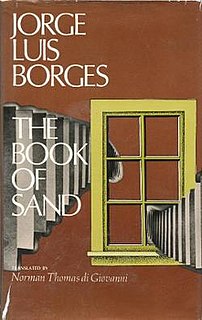 The Book of Sand is a 1975 short story collection by Argentine writer Jorge Luis Borges. In the author's opinion, the collection, written in his last days — and while blind — is his best book. This opinion is not shared by most critics, many of whom prefer his other works such as those in Ficciones (1944). 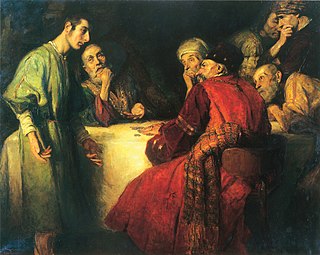 Thirty pieces of silver was the price for which Judas Iscariot betrayed Jesus, according to an account in the Gospel of Matthew 26:15 in the New Testament. Before the Last Supper, Judas is said to have gone to the chief priests and agreed to hand over Jesus in exchange for 30 silver coins, and to have attempted to return the money afterwards, filled with remorse.

"The Analytical Language of John Wilkins" is a short essay by Argentine writer Jorge Luis Borges, first printed in La Nación on 8 February 1942 and subsequently published in Otras Inquisiciones (1937–1952). It is a critique of the English natural philosopher and writer John Wilkins's proposal for a universal language and of the representational capacity of language generally. In it, Borges imagines a bizarre and whimsical Chinese taxonomy later quoted by Michel Foucault, David Byrne, and others.

Predestination in Catholicism is the Catholic Church's teachings on predestination and Catholic saints' views on it. The church believes that predestination is not based on anything external to God - for example, the grace of baptism is not merited but given freely to those who receive baptism - since predestination was formulated before the foundation of the world. Predestination to eternal life, deification, divine filiation, and heaven encompasses all of mankind, for God has assumed man to his divinity by becoming man. Since man is a microcosm of creation, all of creation shares in man's predestination: it belongs to everyone, it is destined for renewal on Judgment Day, and it is being guided to its destiny by Divine Providence.