Threefish is a symmetric-key tweakable block cipher designed as part of the Skein hash function, an entry in the NIST hash function competition. Threefish uses no S-boxes or other table lookups in order to avoid cache timing attacks; [1] its nonlinearity comes from alternating additions with exclusive ORs. In that respect, it is similar to Salsa20, TEA, and the SHA-3 candidates CubeHash and BLAKE.

Description of the cipher

is the number of plaintext words and also of key words. The tweak consists of two words. All additions and subtractions are defined modulo

: Number of rounds). To calculate these keys an additional key word

is appended to the original key words

is also appended to the tweak words

The purpose of the seemingly arbitrary constant

and the other keywords.

The round key words

is the number of the round in which the round key is used.

The mix function takes a tuple of words

and returns another tuple of words

is a fixed set of rotation constants chosen to achieve quick diffusion.

The permutation step swaps the positions of the words according to a constant pattern. Bit-level permutation is not achieved in this step, but this is not necessary since the MIX functions provides bit-level permutations in the form of bitwise rotations.[ citation needed ] The Permute step and rotation constants in the MIX functions are chosen in such a way that the overall effect is complete diffusion of all the bits in a data block.[ citation needed ]

Because this permutation is fixed and independent of the key, the time needed to compute it does not provide information about the key or plaintext. This is important because on most modern microprocessors performance optimisations can make the time taken to compute an array operation dependent on where the data is stored in memory. In ciphers where array lookup depends on either the key or plaintext (as is the case for the substitution step in AES), it can make the cipher vulnerable to timing attacks by examining the time required for encryption. The permutation is therefore deliberately designed to ensure that it should execute in the same fashion independent of the key being used or the data encrypted.[ citation needed ]

After all rounds are applied, the last round key is added to the words and the words are converted back to a string of bytes.

In October 2010, an attack that combines rotational cryptanalysis with the rebound attack was published. The attack mounts a known-key distinguisher against 53 of 72 rounds in Threefish-256, and 57 of 72 rounds in Threefish-512. It also affects the Skein hash function. [2] This is a follow-up to the earlier attack published in February, which breaks 39 and 42 rounds respectively. [3] In response to this attack, the Skein team tweaked the rotation constants used in Threefish and thereby the key schedule constants for round 3 of the NIST hash function competition. [1]

In 2009, a related key boomerang attack against a reduced round Threefish version was published. For the 32-round version, the time complexity is

and the memory complexity is

; for the 33-round version, the time complexity is

with a negligible memory usage. The attacks also work against the tweaked version of Threefish: for the 32-round version, the time complexity is

and the memory complexity is

; for the 33-round version, the time complexity is

with a negligible memory usage. [4]

In cryptography, a block cipher is a deterministic algorithm operating on fixed-length groups of bits, called blocks. It uses an unvarying transformation, that is, it uses a symmetric key. They are specified elementary components in the design of many cryptographic protocols and are widely used to implement the encryption of large amounts of data, including data exchange protocols.

The Digital Signature Algorithm (DSA) is a Federal Information Processing Standard for digital signatures, based on the mathematical concept of modular exponentiation and the discrete logarithm problem. DSA is a variant of the Schnorr and ElGamal signature schemes.

In cryptography, a Feistel cipher is a symmetric structure used in the construction of block ciphers, named after the German-born physicist and cryptographer Horst Feistel who did pioneering research while working for IBM (USA); it is also commonly known as a Feistel network. A large proportion of block ciphers use the scheme, including the US Data Encryption Standard, the Soviet/Russian GOST and the more recent Blowfish and Twofish ciphers. In a Feistel cipher, encryption and decryption are very similar operations, and both consist of iteratively running a function called a "round function" a fixed number of times.

In computer science, a one-way function is a function that is easy to compute on every input, but hard to invert given the image of a random input. Here, "easy" and "hard" are to be understood in the sense of computational complexity theory, specifically the theory of polynomial time problems. Not being one-to-one is not considered sufficient for a function to be called one-way.

The GOST hash function, defined in the standards GOST R 34.11-94 and GOST 34.311-95 is a 256-bit cryptographic hash function. It was initially defined in the Russian national standard GOST R 34.11-94 Information Technology – Cryptographic Information Security – Hash Function. The equivalent standard used by other member-states of the CIS is GOST 34.311-95.

The Blum–Goldwasser (BG) cryptosystem is an asymmetric key encryption algorithm proposed by Manuel Blum and Shafi Goldwasser in 1984. Blum–Goldwasser is a probabilistic, semantically secure cryptosystem with a constant-size ciphertext expansion. The encryption algorithm implements an XOR-based stream cipher using the Blum-Blum-Shub (BBS) pseudo-random number generator to generate the keystream. Decryption is accomplished by manipulating the final state of the BBS generator using the private key, in order to find the initial seed and reconstruct the keystream.

In cryptography, a one-way compression function is a function that transforms two fixed-length inputs into a fixed-length output. The transformation is "one-way", meaning that it is difficult given a particular output to compute inputs which compress to that output. One-way compression functions are not related to conventional data compression algorithms, which instead can be inverted exactly or approximately to the original data.

In mathematics and computing, universal hashing refers to selecting a hash function at random from a family of hash functions with a certain mathematical property. This guarantees a low number of collisions in expectation, even if the data is chosen by an adversary. Many universal families are known, and their evaluation is often very efficient. Universal hashing has numerous uses in computer science, for example in implementations of hash tables, randomized algorithms, and cryptography.

MASH-1 is a hash function based on modular arithmetic. 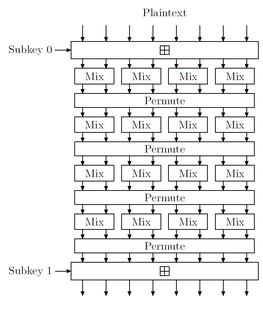 Skein is a cryptographic hash function and one of five finalists in the NIST hash function competition. Entered as a candidate to become the SHA-3 standard, the successor of SHA-1 and SHA-2, it ultimately lost to NIST hash candidate Keccak.

LSH is a cryptographic hash function designed in 2014 by South Korea to provide integrity in general-purpose software environments such as PCs and smart devices. LSH is one of the cryptographic algorithms approved by the Korean Cryptographic Module Validation Program (KCMVP). And it is the national standard of South Korea.