A throat lozenge (also known as a cough drop, troche, cachou, pastille or cough sweet) is a small, typically medicated tablet intended to be dissolved slowly in the mouth to temporarily stop coughs, lubricate, and soothe irritated tissues of the throat (usually due to a sore throat), possibly from the common cold or influenza. Cough tablets have taken the name lozenge, based on their original shape, a diamond.

Other varieties such as Halls contain menthol, peppermint oil and/or spearmint as their active ingredient(s). Honey lozenges are also available.

The purpose of the throat lozenge is to calm the irritation that may be felt in the throat while swallowing, breathing, or even drinking certain fluids.

Candies to soothe the throat date back to 1000 BC in Egypt's Twentieth Dynasty, when they were made from honey flavored with citrus, herbs, and spices.[ citation needed ] In the 19th century, physicians discovered morphine and heroin, which suppress coughing at its source—the brain. Popular formulations of that era included Smith Brothers Cough Drops, first advertised in 1852, and Luden's, created in 1879. Concern over the risk of opioid dependence led to the development of alternative medications. [1] 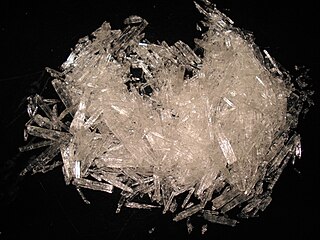 Menthol is an organic compound made synthetically or obtained from the oils of corn mint, peppermint, or other mints. It is a waxy, crystalline substance, clear or white in color, which is solid at room temperature and melts slightly above. 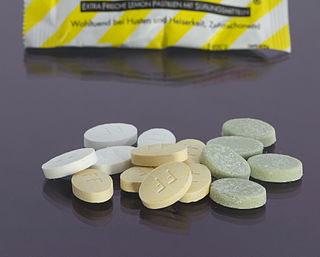 Fisherman's Friend is a brand of strong menthol lozenges manufactured by the Lofthouse company in Fleetwood, Lancashire, England.

Chloraseptic is an American brand of oral analgesic produced by Tarrytown, NY-based Prestige Brands Inc., used for the relief of sore throat and mouth pain. Its active ingredient is phenol, a compound whose antiseptic properties were discovered by Friedlieb Ferdinand Runge.

Lakrisal is a Malaco brand of salty liquorice sold in the Nordic countries and the Netherlands.

Halls is the brand name of a popular mentholated cough drop. Halls cough drops are sold by the Cadbury-Adams Division of Cadbury, now owned by Mondelēz International, and have long been advertised as featuring "Vapor Action". Halls was first made in the 1930s in Stanley Road, Whitefield, Lancashire, United Kingdom by the Halls Brothers company, founded 1893 by Thomas Harold Hall and Norman Smith Hall. Halls Brothers was acquired by Warner-Lambert in 1964. Production in Whitefield ceased in the late 1980s. When Pfizer acquired Warner-Lambert in 2000, the Halls brand came with the entire Adams portfolio. Two years later, Adams was bought out by Cadbury, who were subsequently purchased by Kraft foods, which was later restructured and renamed Mondelēz International - as of 2015, Mondelēz International owns the Halls brand worldwide.

Airwaves is a brand of sugarfree chewing gum produced by the Wm. Wrigley Jr. Company, and sold primarily in Europe and East Asia. The brand is marketed for its intense flavor similar to the effect one would get from the consumption of cough drops. This intensity of flavor is obtained by including Eucalyptus and Menthol in the candy coating of the tablets of gum.

A pastille is a type of sweet or medicinal pill made of a thick liquid that has been solidified and is meant to be consumed by light chewing and allowing it to dissolve in the mouth. They are also used to describe certain forms of incense.

William Henry Luden was the developer of the menthol cough drop, and founder of the Luden's company and brand.

The Smith Brothers were makers of the first cough drops produced and advertised in the United States, becoming one of the most famous brands in the country in its day. 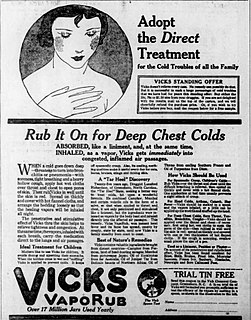 Vicks VapoRub is a mentholated topical ointment, part of the Vicks brand of over-the-counter medications owned by the American consumer goods company Procter & Gamble. VapoRub is intended for use on the chest, back and throat for cough suppression or on muscles and joints for minor aches and pains. It has also been used to treat mosquito bites. Users of VapoRub often apply it immediately before sleep.

Ambroxol is a drug that breaks up phlegm, used in the treatment of respiratory diseases associated with viscid or excessive mucus. Recently, a hypothesis suggested that it may have a potential role in treatment of Paget's disease of bone, Parkinsonism, and other common diseases of aging-associated diseases involving dysfunction of autophagy. Ambroxol is often administered as an active ingredient in cough syrup.

An aniseed twist is a red or occasionally orange, aniseed-flavoured boiled sweet common in the United Kingdom. A clove-flavored variant is Cough Candy, which is sometimes written as Koff Candy instead. Confectioners who make aniseed twists include Bonds of London and Trebor. The relative piquancy of the sweet's aniseed flavour varies considerably among confectioners.

Nói Síríus is a family-owned chocolate and confection manufacturer in Iceland that was founded in 1920. Hallgrímur Benediktsson took over as main owner in the 1920s, and his grandson, Finnur Geirsson, is the company's current president. Nói Síríus is Iceland's biggest candy producer and its candies have been a traditional part of camping trips since 1933, along with stockfish.

Olbas Oil is a remedy, of Swiss origin, for congestion in the chest and nose, some hayfever relief and also for muscle ache via massage. It is made from a mixture of several different essential oils and has been marketed since before 1916. The name is a contraction of Oleum Basileum, "oil from Basel". 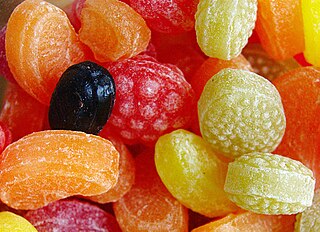 A hard candy, or boiled sweet, is a sugar candy prepared from one or more sugar-based syrups that is boiled to a temperature of 160 °C (320 °F) to make candy. Among the many hard candy varieties are stick candy such as the candy cane, lollipops, aniseed twists, and bêtises de Cambrai. 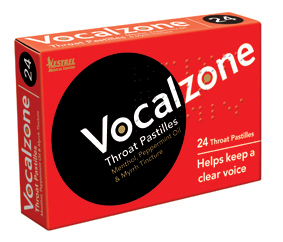 Vocalzone Throat Pastilles is a brand of throat pastille, or throat lozenge, used to help keep a speaking or singing voice clear during public performance and singing. The company was founded in 1912 by William Lloyd, who adapted a medicine he had created for the tenor Enrico Caruso into a pastille form. After Lloyd’s death in 1948, Vocalzone was sold to Ernest Jackson in 1955 before later being acquired by Kestrel HealthCare Limited in 1993.