Thudaka Peak is the highest mountain of the Thudaka Range of the Cassiar Mountains in the Northern Interior of British Columbia, Canada, located between the heads of Obo River and Frog River. Glaciers exist on Thudaka's northern flanks, but the zone is usually quite dry.

Monarch Mountain is one of the principal summits of the Pacific Ranges subdivision of the Coast Mountains in southern British Columbia. It stands just east of a pass between the Klinaklini River and the south branch of the Atnarko River, which is a tributary of the Bella Coola River. Surrounding Monarch Mountain is the Monarch Icefield, the northernmost of the major icefields of the Pacific Ranges, and just south of it is the Ha-Iltzuk Icefield, which is the largest. Monarch is in the southern end of Tweedsmuir South Provincial Park.

Mount Hector is a 3,394-metre (11,135-foot) mountain summit located in the Bow River valley of Banff National Park, in the Canadian Rockies of Alberta, Canada. The mountain was named in 1884 by George M. Dawson after James Hector, a geologist on the Palliser expedition. The mountain is located beside the Icefields Parkway, 17 km (11 mi) north of Lake Louise.

Chutine Peak is one of the highest mountains in the Boundary Ranges, a group of subranges of the northern Coast Mountains of British Columbia and Alaska. Chutine Peak lies just east of the Stikine Icecap, and to the north and west of the Stikine River, and south of the basin of the Whiting River. It is notable for its huge west face: the drop to Chutine Lake is 2,600 m (8,530 ft) in 3.5 km (2 mi). Due to its remoteness, however, it is rarely visited.

Mount Edziza is a stratovolcano in the Stikine Country of northwestern British Columbia, Canada. The volcano and the surrounding area are protected within Mount Edziza Provincial Park. It consists of multiple peaks and ridges, with several glaciers flowing in all directions. The summit is topped by an ice-filled caldera, which is almost 2 km (1 mi) wide. The three main peaks around the summit caldera are the southwest summit, the southeast summit and the north summit. Ice Peak overlaps the southern flank of Mount Edziza. 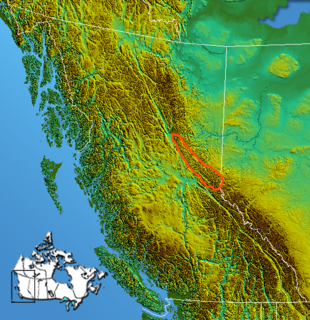 The Hart Ranges are one of the main geographic subdivisions of the Canadian Rockies and are the main part of the area that is meant by the Northern Rockies, although the much larger Muskwa Ranges to the north are more deserving of that term — but also much more inaccessible and much less visited — and the Northern Rockies are generally also considered to extend at least as far south as Mount Robson, which is in the Continental Ranges. The Hart Ranges were named in honour of British Columbia Premier John Hart, as is the highway which traverses the Pine Pass in the northern part of the range, connecting the north-central Interior of the province to its Peace River District to the northeast. 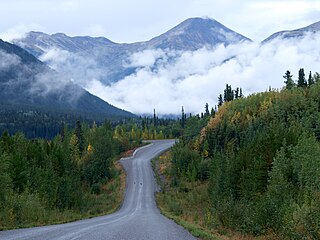 The Cassiar Mountains are the most northerly group of the Northern Interior Mountains in the Canadian province of British Columbia and also extend slightly into the southernmost Yukon Territory. They lie north and west of the Omineca Mountains, west of the northernmost Rockies and the Rocky Mountain Trench, north of the Hazelton Mountains and east of the Boundary Ranges. They form a section of the Continental Divide, that, in this region, separates water drainage between the Arctic and Pacific Oceans. Physiographically, they are a section of the larger Yukon-Tanana Uplands province, which in turn are part of the larger Intermontane Plateaus physiographic division.

The Stikine Ranges are a group of mountain ranges and mountainous plateaus in northwestern British Columbia, Canada. They are the northernmost subdivision of the Cassiar Mountains and among the least explored and most undeveloped parts of the province.

The Thudaka Range is a mountain range located east of the Rocky Mountain Trench in British Columbia, Canada bounded by the Obo River on the east, the Frog River on the west, and on the south by the pass between Geese and Thudaka Creeks. The highest peak in the range is Thudaka Peak at 2,748 m (9,016 ft). The range is part of the Stikine Ranges.

Shedin Peak is the highest mountain in the Atna Range and in the Skeena Mountains of northern British Columbia, Canada, located 77 km (48 mi) north of Hazelton at the head of Rosenthal Creek. It has a prominence of 1,798 m (5,899 ft), created by the Bear-Driftwood Pass.

Mount Thomlinson is a mountain in the Babine Range of the Skeena Mountains in northern British Columbia, Canada, located at the head of Thomlinson Creek, southeast of the junction of Babine River and Skeena River and north of Hazelton. It has a prominence of 1,661 m (5,449 ft), created by the Babine-Stuart Pass, thus making it one of Canada's many Ultra peaks. Thomlinson is one of the most isolated mountains of Canada.

Kispiox Mountain is the highest mountain in the Kispiox Range of the Hazelton Mountains in northern British Columbia, Canada, located northwest of the junction of Kispiox River and Skeena River. It has a prominence of 1,561 m (5,121 ft), created by the Kispiox-Nass Pass, thus making it one of Canada's many ultra-prominent peaks.

Chatsquot Mountain, 2365 m, is a high-prominence summit in the Kitimat Ranges of the Coast Mountains in British Columbia, Canada, located northwest of Kimsquit Lake, east of the lower Kitlope River, and at the upper end of the basin of the Kimsquit River. It is part of the Kitimat Ranges which in turn form part of the Coast Mountains. With a topographic prominence of 1,981 m (6,499 ft), it is one of Canada's Ultra peaks and is the 98th most prominent summits of North America. It is also one of the most isolated mountain peaks of Canada. 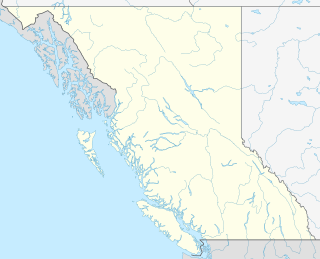 Sifton Pass, 1012 m (3320 ft), is a mountain pass in the Rocky Mountain Trench in the Northern Interior of British Columbia, Canada, forming the divide between the Fox and Kechika Rivers, and therefore between the drainage basins of the Finlay and Liard Rivers. It also forms a division point between the Muskwa Ranges of the Northern Rockies to its east, and the Cassiar Mountains to its west.

Whiting Peak is an unofficial name for a mountain in British Columbia, Canada. It has an elevation of 2,524 metres (8,281 ft) above sea level and is one of Canada's many ultra prominent peaks.

Tsaydaychuz Peak, 2758 m, prominence below Howson Peak is 1826 m, is a mountain in the Pattullo Range of the Hazelton Mountains, the southernmost subdivision of the Northern Interior Mountains system of the British Columbia Interior. The Pattullo Range, of which Tsaydaychuz is the highest summit, is located south of Tesla and Eutsuk Lakes and to the north of the Dean River. To its east is the Nechako Plateau. There are no known ascents of this peak.