Thylacosmilidae is an extinct family of metatherian predators, related to the modern marsupials, which lived in South America between the Miocene and Pliocene epochs. Like other South American mammalian predators that lived prior to the Great American Biotic Interchange, these animals belonged to the order Sparassodonta, which occupied the ecological niche of many eutherian mammals of the order Carnivora from other continents. The family's most notable feature are the elongated, laterally flattened fangs, which is a remarkable evolutionary convergence with other saber-toothed mammals like Barbourofelis and Smilodon . [1]

In 1997, a second genus and species of thylacosmilid was described from the Laventan Honda Group at the Lagerstätte La Venta in Colombia, Anachlysictis gracilis . This animal, less specialized than Thylacosmilus, was the first indication that the family's origin dates back to before the end of the Miocene. In fact, the anatomy of Anachlysictis' molar teeth suggests a closer relationship with basal sparassodonts like Hondadelphys than with advanced sparassodonts like Borhyaena . [2] [3] Also, additional materials of a small predatory sparassodont of Colombia have been found, which has certain features diagnostic of thylacosmilids, but much less specialized, as well as indeterminate remains in Uruguay and the Argentinean Patagonia, from the early Pliocene, has been tentatively assigned to family. [1] Forasiepi and Carlini in 2010 unveiled a third genus and species, Patagosmilus goini , from the Collón Cura Formation of Argentina from the mid-Miocene, with characteristics intermediate between Anachlysictis and Thylacosmilus. [1]

The family is perhaps the best known among sparassodonts because of their dental and cranial specializations, which are superficially similar to that of the saber-toothed cats, often cited as an example of convergent evolution between placental and metatherian mammals. However, there were several differences between thylacosmilids and the other saber-toothed mammals, and these unique traits diagnose the family: unique traits include canine teeth that grew continuously, less specialized carnassial molars and tremendous, flange-like outgrowths of the lower jaw that protected the saber-teeth.

In Thylacosmilus, the last and most specialized known member, the incisors are very small and the lower teeth are poorly developed, and tack-shaped; in the other genera these elements are unknown. In Thylacosmilus, the upper incisors are unknown other than by wear indentations on the lower incisors, as no premaxilla has ever been found complete in this genus. [4] Another evolutionary trend in families is the progressive reduction of masseter and temporal muscles, resulting in relatively weak bites, but compensated by the increase in the size of the neck muscles to lower the head and the fangs into the necks of their prey. [5] Fossils of Thylacosmilus forelimbs, the only reported for this group, indicate that animals were not fast runners, and were in turn adapted to exert force in order to subdue their prey, helping with their semiopposable thumb. [6]

A recent study has since proposed a lack of analogy between thylacosmilids and saber toothed eutherians, speculating that rather than using the fangs to pierce prey they were instead used to open up corpses. Their lack of incisors and crushing molars suggest an entrail-based diet, and irrigated bone on the maxillae suggests some sort of extensive, soft tissue-based structure. [7] 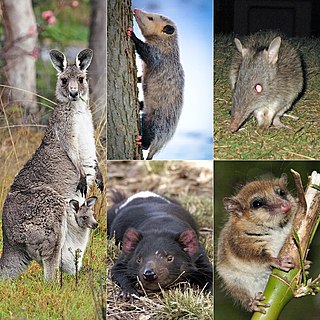 Marsupials are any members of the mammalian infraclass Marsupialia. All extant marsupials are endemic to Australasia, Wallacea and the Americas. A distinctive characteristic common to most of these species is that the young are carried in a pouch. Marsupials include opossums, Tasmanian devils, kangaroos, koalas, wombats, wallabies, bandicoots, and the extinct thylacine.

Opossums are members of the marsupial order Didelphimorphia endemic to the Americas. The largest order of marsupials in the Western Hemisphere, it comprises 120+ species in 19 genera. Opossums originated in South America and entered North America in the Great American Interchange following the connection of the two continents. 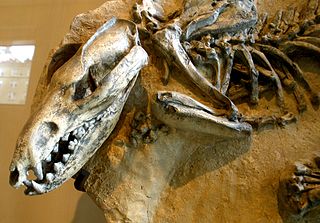 Metatheria is a mammalian clade that includes all mammals more closely related to marsupials than to placentals. First proposed by Thomas Henry Huxley in 1880, it is a more inclusive group than the marsupials; it contains all marsupials as well as many extinct non-marsupial relatives. 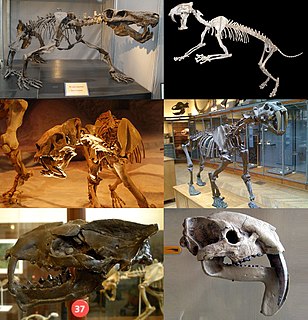 A saber-tooth is any member of various extinct groups of predatory therapsids, predominantly carnivoran mammals, that are characterized by long, curved saber-shaped canine teeth which protruded from the mouth when closed. Saber-toothed mammals have been found almost worldwide from the Eocene epoch to the end of the Pleistocene epoch 42 million years ago (mya) – 11,000 years ago (kya).

Yalkaparidon is an extinct genus of Australian marsupials, first described in 1988 and known only from the Oligo-Miocene deposits of Riversleigh, northwestern Queensland, Australia.

Sparassodonta is an extinct order of carnivorous metatherian mammals native to South America. They were once considered to be true marsupials, but are now thought to be either a sister taxon to them, or far more distantly related, part of a separate clade of Gondwanan metatherians. A number of these mammalian predators closely resemble placental predators that evolved separately on other continents, and are cited frequently as examples of convergent evolution. They were first described by Florentino Ameghino, from fossils found in the Santa Cruz beds of Patagonia. Sparassodonts were present throughout South America's long period of "splendid isolation" during the Cenozoic; during this time, they shared the niches for large warm-blooded predators with the flightless terror birds. Previously, it was thought that these mammals died out in the face of competition from "more competitive" placental carnivorans during the Pliocene Great American Interchange, but more recent research has showed that sparassodonts died out long before eutherian carnivores arrived in South America. Sparassodonts have been referred to as borhyaenoids by some authors, but currently the term Borhyaenoidea refers to a restricted subgroup of sparassodonts comprising borhyaenids and their close relatives. 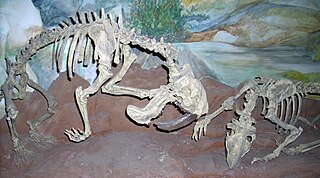 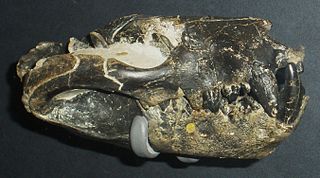 Borhyaenidae is an extinct metatherian family of low-slung, heavily built predatory mammals in the order Sparassodonta. Borhaenids are not true marsupials, but members of a sister taxon, Sparassodonta. Like most metatherians, borhyaenids and other sparassodonts are thought to have had a pouch to carry their offspring around. Borhyaenids had strong and powerful jaws, like those of the unrelated placentalians Hyaenodon and Andrewsarchus, for crushing bones. Borhyaenids grew up to an average of 5 to 6 feet long. Borhyaena is the type genus of this group.

Machaeroides ("dagger-like") is a genus of sabre-toothed predatory mammal that lived during the Eocene. Its fossils were found in the U.S. state of Wyoming. 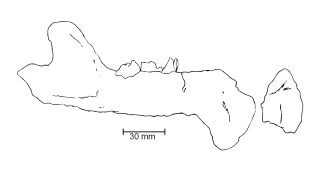 Anachlysictis gracilis is an extinct carnivorous mammal belonging to the group Sparassodonta, which were metatherians that inhabited South America during the Cenozoic. Anachlysictis is the first record of such borhyaenoids in northern South America, and also the most primitive known member of the family Thylacosmilidae, a group of predators equipped with "saber teeth". It was also the only confirmed record of a thylacosmilid that did not belong to the genus Thylacosmilus until the official publication of Patagosmilus in 2010.

Dukecynus is an extinct genus of meat-eating metatherian belonging to the order Sparassodonta, which lived in South America during the Middle Miocene (Laventan), between about 13.8 and 11.8 million years ago. The name of the genus meaning "Duke dog", for Duke University and the Greek word cynos, dog, for the pretended similarity of this animal with dogs. A single species known so far, Dukecynus magnus. The species name "magnus" derives from Latin for big, to reflect their great size.

Proborhyaenidae is an extinct family of metatherian mammals of the order Sparassodonta, which lived in South America from the Eocene (Mustersan) until the Oligocene (Deseadan). Sometimes it has been included as a subfamily of their relatives, the borhyaenids. Body mass estimates suggest that proborhyaenids could weigh up to 150 kilograms (330 lb), making them some of the largest known metatherians. Proborhyaenid remains have been found in western Bolivia, Uruguay, southern Brazil, and the provinces of Mendoza, Salta, and Chubut, in Argentina.

Pharsophorus is an extinct genus of borhyaenoid sparassodont that inhabited South America during the Middle to Late Oligocene epoch.

Patagosmilus is an extinct genus of meat-eating metatherian mammal of the family Thylacosmilidae, that lived in the Middle Miocene in South America. Like other representatives of this family, such as Thylacosmilus atrox and Anachlysictis gracilis, it was characterized by its elongated fangs of the upper jaw, similar to the well known "sabertooth cats" (Machairodontinae), which they were ecological equivalents. Despite being geologically younger than Anachlysictis, the morphology of Patagosmilus suggests that this species was more closely related to Thylacosmilus than Anachlysictis, though in other respects this species is less specialized than Thylacosmilus. 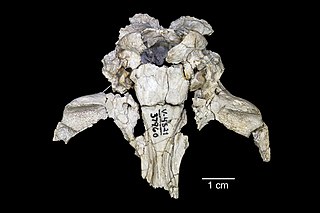 Hondadelphys is an extinct genus of carnivorous sparassodonts, known from the Middle Miocene of Colombia. The type species, H. fieldsi, was described in 1976 from the fossil locality of La Venta, which hosts fossils from the Villavieja Formation. Hondadelphys was originally interpreted as belonging to the opossum family Didelphidae, but subsequently assigned to its own family, Hondadelphidae and interpreted as a basal sparassodont. The genus name refers to the Honda Group, the stratigraphic group in which the fossils of this animal were first found, combined with delphys (Greek for "womb", a common suffix used for opossum-like metatherians).

Groeberiidae is a family of strange non-placental mammals from the Eocene and Oligocene epochs of Patagonia, Argentina and Chile, South America. Originally classified as paucituberculate marsupials, they are now argued to be late representatives of the allothere clade Gondwanatheria.

Patagonia is an extinct genus of non-placental mammal from the Miocene of Argentina. Traditionally considered a metatherian incertae sedis, more recent analysis have shown it to be a gondwanathere. It is the youngest allothere species known. 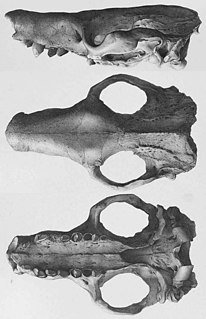 Macroeuphractus is a genus of extinct armadillos from the Late Miocene to Late Pliocene of South America. The genus is noted for its large size, with Macroeuphractus outesi being the largest non-pampathere or glyptodont armadillo discovered, as well as its specializations for carnivory, unique among all xenarthrans.

Anatoliadelphys maasae is an extinct genus of predatory metatherian mammal from the Eocene of Europe. It was an arboreal, cat-sized animal, with powerful crushing jaws similar to those of the modern Tasmanian devil. Although most mammalian predators of the northern hemisphere in this time period were placentals, Europe was an archipelago, and the island landmass now forming Turkey might have been devoid of competing mammalian predators, though this may not matter since other carnivorous metatherians are also known from the Cenozoic in the Northern Hemisphere. Nonetheless, it stands as a reminder that mammalian faunas in the Paleogene of the Northern Hemisphere were more complex than previously thought, and metatherians did not immediately lose their hold as major predators after their success in the Cretaceous.