Type H Tightlock couplers are a variety of Janney coupler, typically used on North American mainline passenger rail cars. They are designed with mechanical features which reduce slack in normal operation and prevent telescoping in derailments, yet remain compatible with other Janney types used by North American freight railroads.

Like all Janney couplers, the Tightlock is "semi-automatic" with the couplers on cars or locomotives automatically locking when cars are pushed together. However, most tightlock couplers are not fully automatic, as workers still need to go between cars to hook up the air lines for the pneumatic brakes, and connect cables for head-end power and other communications. Also, to separate cars, a worker needs to use a lever to move the locking pin that keeps the coupler closed.

Janney Type H TightLock coupler standards were established by the Association of American Railroads. Management and development of the standard was transferred to the American Public Transportation Association in 1971 when passenger service was nationalized in the United States from most private railway companies to Amtrak.

Tightlock use in the United Kingdom

Type H couplers are in widespread use on multiple unit passenger trains in the UK built from the mid 1970s onwards. The previous generation of slam door units fitted with Buckeye/Henricot couplers had required a shunter to get down onto the track and stand between the two units to manually trip the coupler mechanism as well as connect or disconnect the air pipes and electrical jumper leads. In order to reduce staffing costs and cut down station dwell times, British Rail looked to incorporate an automatic coupler mechanism in its new power-door trains. Class 313 units were the first stock to incorporate this. Air-operated Tightlock couplers were chosen, together with underslung electrical connector boxes controlled by a Drum switch, and this allowed drivers to single-handedly attach or split a train without having to leave the cab.

Tightlock was generally a success in the UK, but there were reliability issues and some notable incidents occurred where trains divided in service. The constant couple-uncouple cycles of heavy London commuter services caused the couplers' mechanisms to wear out faster than expected. Connex South Eastern's Networker fleet was particularly susceptible to this and the company blamed its drivers in the media, [3] then changed its coupling instructions to drivers to include a "push-on, pull off" power test and visual inspection to ensure that the knuckles had engaged fully.

By the early 2000s the first batch of Bombardier Electrostar Class 375s had been built with Tightlock couplers for Connex South Central and Connex South Eastern, but it was quickly decided that Dellner couplings would be preferable. All subsequent units were built with these, and their earlier examples were eventually modified.

All multiple-unit trains built for the UK since then have been equipped with Dellner couplings. 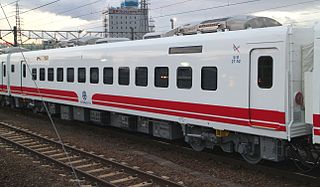 The British Rail Class 377 Electrostar is a British dual-voltage electric multiple-unit passenger train (EMU) built by Bombardier Transportation on its Electrostar platform at Derby Litchurch Lane Works from 2001 to 2014.

A coupling is a mechanism used to connect rolling stock together in a train.

A railway brake is a type of brake used on the cars of railway trains to enable deceleration, control acceleration (downhill) or to keep them immobile when parked. While the basic principle is similar to that on road vehicle usage, operational features are more complex because of the need to control multiple linked carriages and to be effective on vehicles left without a prime mover. Clasp brakes are one type of brakes historically used on trains. 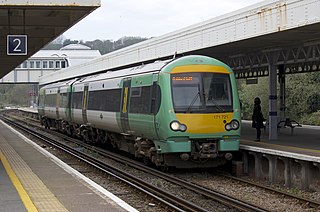 The British Rail Class 171Turbostar is a type of diesel multiple-unit (DMU) passenger train built by Bombardier Transportation at its Derby Litchurch Lane Works in England, which is identical to the Class 170, except for the replacement of the BSI coupler with a Dellner coupling. This provision was made to allow emergency joining with Class 377 DC third-rail electric units, which Southern runs extensively on most lines. The units work on the southern regions of the British railway system, operating services from London Bridge to Uckfield and from Eastbourne to Ashford International, these routes being unelectrified between Hurst Green Junction and Uckfield and between Ore and Ashford International, respectively.

The British Rail Class 466 Networker is a class of 43 electric multiple units were built by Metro-Cammell in 1993 and 1994. The units are operated by Southeastern.

An electric multiple unit (EMU) is an electric train capable of operating in multiple with other EMUs that does not have a separate locomotive, typically passenger trains with accommodation in every vehicle and a driving position at each end. The term can also be used to describe a train such as the Advanced Passenger Train that was a permanent formation with a non-driving power car. As of December 2010 two-thirds of the passenger carriages in Britain are formed in EMUs. 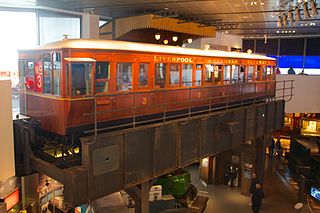 An electric multiple unit or EMU is a multiple-unit train consisting of self-propelled carriages using electricity as the motive power. An EMU requires no separate locomotive, as electric traction motors are incorporated within one or a number of the carriages. An EMU is usually formed of two or more semi-permanently coupled carriages, but electrically powered single-unit railcars are also generally classed as EMUs. The great majority of EMUs are passenger trains, but versions also exist for carrying mail.

The Pioneer III railcar was a short/medium-distance coach designed and built by the Budd Company in 1956 with an emphasis on weight savings. A single prototype was built, but declines in rail passenger traffic resulted in a lack of orders so Budd re-designed the concept as an electric multiple unit (m.u.). Six of the EMU coach design were purchased by the Pennsylvania Railroad with the intention of using them as a high-speed self-contained coach that could be used for long-distance commuter or short-distance intercity travel in the Northeast U.S. The 6 production Pioneer III units were the first all-stainless-steel-bodied EMU railcar built in North America and, at 90,000 pounds (41,000 kg), the lightest. 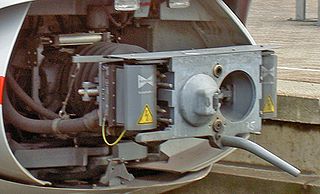 The Scharfenberg coupler is a commonly used type of fully automatic railway coupling.

SA3 couplers are railway rollingstock couplings used primarily in Russia and states influenced by the former Soviet Union, such as Finland and Mongolia.

The railcar couplers or couplings listed, described, and depicted below are used worldwide on legacy and modern railways. Compatible and similar designs are frequently referred to using widely differing make, brand, regional or nick names, which can make describing standard or typical designs confusing. Dimensions and ratings noted in these articles are usually of nominal or typical components and systems, though standards and practices also vary widely with railway, region, and era. Transition between incompatible coupler types may be accomplished using Dual or Compromise couplings or a Barrier wagon.

The C-AKv is a fully automatic coupler design, also known as the Faiveley Transpact; it is a hybrid compatible with both buffers and chain couplers and Russian SA3 couplers, intended as an option for the long delayed EU transition to center buffer couplers. C-AKv is an abbreviation of Compact Automatische Kupplung vereinfacht in German, translating to Compact Automatic Coupler simplified in English.

Janney couplers are a semi-automatic form of railway coupling that allow rail cars and locomotives to be securely linked together without rail workers having to get between the vehicles. They are also known as American, AAR, APT, ARA, MCB, knuckle, buckeye, or center-buffer couplers.

From time to time, a railway decides that it needs to upgrade its coupling system from one that is proving unsatisfactory, to another that meets future requirements. This can be done gradually, which can create many problems with transitional incompatibilities, or overnight, which requires much planning.

The CP 2240-class is an electric multiple unit used by the national train operator Comboios de Portugal. Each EMU features 3 cars, with the ends being driving trailers, and the middle being a power car. 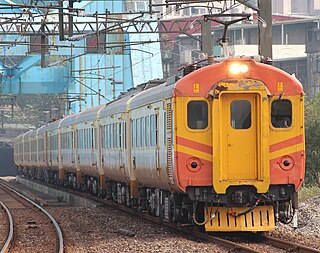 The Taiwan Railway EMU100 series was a set of rail cars fabricated by British Rail Engineering Limited and the General Electric Company in 1976 that has operated in Taiwan. The alternating current electric multiple unit (EMU) fleet entered full squadron service in 1979, and was withdrawn from service in 2009. This class of railcars were the first to operate on the electric Tzu-Chiang Express. Due to the unit's British origin, rail buffs have variously nicknamed them "British Girl", "British Lady", or "British Grandma".

Buffers and chain couplers are the de facto UIC standard railway stock coupling used in the EU and UK, and on some surviving colonial railways, such as in South America and India on older coaches. These couplers are an assembly of several devices: buffers, hooks and links or screws.

Different types of railroad rolling stock have different couplers depending on the purpose and type of equipment being used and its intended destination. European rolling stock tend to use buffers and chain couplers while American rolling stock uses a Janney coupler or "knuckle coupler". These are incompatible with each other, but where some railroads have obtained older, less expensive used rolling stock from different countries or regions, instead of having to standardize on one form of coupler, it may be useful to be able to use either type of coupler on a piece of rolling stock without having to remove anything.