Anthony Cetinski (born 31 May 1969), known professionally as Tony Cetinski, is a Croatian pop singer. Today, he is one of the most popular male singers in Croatia and countries of former Yugoslavia.

At the 10th Croatian Radio Festival in 2006, Cetinski won all three prizes in pop-rock category: HRF Grand Prix – pop-rock, Listener's award and Music Editors award. [1] He also recorded the song "Lagala nas mala" as a duet with the late Toše Proeski. This song appears on both of Toše Proeski's 2005 albums Po tebe and the Croatian edition Pratim te. The song was also done as a remix by DeeJay Time.

In 2009 Cetinski won the Porin award for best male vocal performance with his song "Ako to se zove ljubav". [2] Cetinski sold out two concerts in Arena Zagreb the same year with more than 30,000 people attending. [3]

In December 2020, Cetinski was announced as one of the 14 finalists for Dora 2021, the national contest in Croatia to select the country's Eurovision Song Contest 2021 entry. [4] He will perform the song "Zapjevaj, sloboda je!" in a duet with Kristijan Rahimovski which was also written by the later. [5]

Tony is married to Dubravka Cetinski.

He is a devout Roman Catholic. [6] 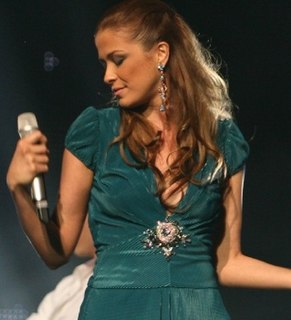 Karolina Gočeva, often credited as Karolina Gocheva, is a Macedonian recording artist. She represented F.Y.R. Macedonia in the 2002 and 2007 Eurovision Song Contests, ranking 19th and 14th. 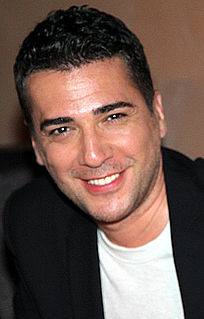 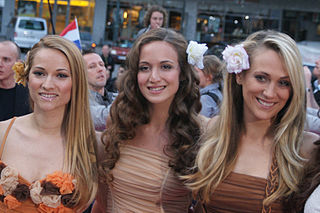 Feminnem was a girl group from Croatia and Bosnia and Herzegovina composed of three members. They represented both countries at the Eurovision Song Contest; Bosnia and Herzegovina in 2005 and Croatia in 2010. On 21 February 2012 Pamela, Neda and Nika decided to start solo careers and leave Feminnem and effectively disbanded the group. 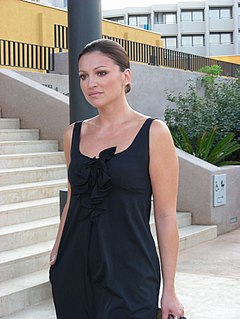 Nina Badrić is a Croatian pop singer and songwriter. She began performing in the early 1990s, and competed in "Dora" – the Croatian selection for Eurovision Song Contest 4 times. She won 7th place in 1993 with "Ostavljam te", 10th place in 1994 with "Godine nestvarne", 18th place in 1995 with "Odlaziš zauvijek", and second place in 2003 with "Čarobno jutro". Badrić eventually represented Croatia in the Eurovision Song Contest 2012 in Baku, Azerbaijan with the song "Nebo". She finished 12th in the second semi-final and failed to qualify for the grand final. 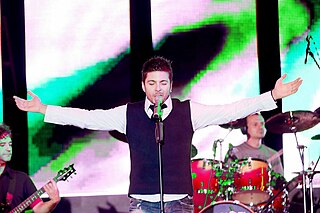 Todor "Toše" Proeski was a Macedonian multi-genre singer, songwriter and actor. Considered a top act of the local Macedonian and Balkan music scene, Proeski's music was popular across multitude of countries of Southeast Europe. He was dubbed the "Elvis Presley of the Balkans" by BBC News. He died in a car crash on the Zagreb–Lipovac A3 highway, near Nova Gradiška in Croatia, on the morning of 16 October 2007, aged 26. 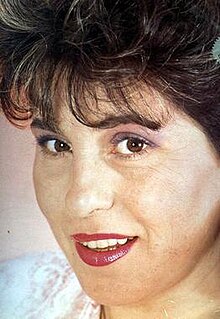 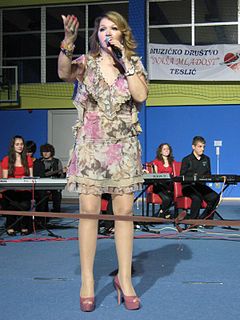 Neda Ukraden is a Yugoslav pop singer born in Croatia, grew up in Bosnia and Herzegovina and is currently living in Belgrade, Serbia. Her professional career stretches back to 1967.

Antonija Šola is a Croatian singer-songwriter and actress.

Milo Hrnić is a Croatian pop singer. His performances characterised by emotional intensity and frequent crowd interactions, his resonant and forceful baritone and distinct brand of poetic lyrics have proclaimed him as one of the most commercially and critically successful Croatian pop singers. Alongside Tereza Kesovija, he was pronounced "the singer of the century" in his native Dubrovnik. 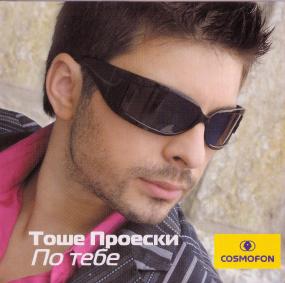 Po tebe is the fifth studio album by the Macedonian singer Toše Proeski. The album was released in Macedonia and subsequently in Serbia, Montenegro, Bosnia and Herzegovina, Croatia and Slovenia under the Serbian title Pratim te.

Nenad "Neno" Belan is a Croatian rock musician, known as the frontman of Đavoli, as well as for his solo work.

Marko Tomasović is a Croatian composer and songwriter. He was born in Zagreb, Croatia, where he has been living all of his life. So far he composed more than 300 songs for some of the best Croatian singers, such as Zdenka Kovačiček, Tereza Kesovija, Oliver Dragojević, Emilija Kokić, Jasna Zlokić, Tomislav Bralić, Danijela Martinović, Alen Vitasović, Emina Arapović, Ibrica Jusić, Lidija Bačić, Maja Šuput, Alen Nižetić, Marina Tomašević... He discovered many young talents and wrote three Band-aid songs. His work has covered various genres. 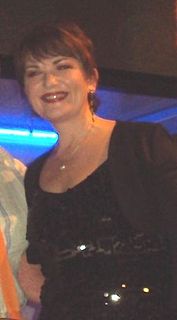 Zorica Kondža is a Croatian pop-folk singer. She is best known for her soprano vocal range, which she displayed as the lead vocalist for the 1980s pop-folk music act Stijene. Since 1981, she had participated in most of the Split Festivals until 2014, which she had won 7 times. Other than the Split festivals, she also took part in various other jamborees in Croatia, such as the Zadarfest, Dora and Mesam. She began her solo career in 1984, which gained her success in Croatia and neighbouring countries.