Moldovan music is closely related to that of its neighbour and cultural kin, Romania. Moldovan folk is known for swift, complex rhythms (a characteristic shared with many Eastern European traditions), musical improvisation, syncopation and much melodic ornamentation. [1] Pop, hip hop, rock and other modern genres have their own fans in Moldova as well. Modern pop stars include O-Zone, a Romanian and Moldovan band whose "Dragostea din tei" was a major 2004 European hit, guitarist and songwriter Vladimir Pogrebniuc, Natalia Barbu, who is well known in Germany, Romania and Ukraine, and Nelly Ciobanu. The band Flacai became well known in the 1970s across Moldova, turning their hometown of Cahul into an important center of music. [2]

During the Soviet era, Moldovan folk culture flourished, and was strongly promoted by the government. However, many elements were altered to obscure the shared history of Romania and Moldova, because the Soviet Union wanted to discourage secession. [3]

The Mioriţa is ancient ballad that is a very important part of Moldovan folk culture.

Moldova's folk music and dance companies, troupes and orchestras are well known, especially Joc, an academic dance company; a joc is a celebration that includes dances, as well as the part of a town where the dancing takes place.

The Orchestra of Moldovan Folk Music and Dance was founded in 1949; the orchestra plays Romanian, Russian, Ukrainian, Polish, German music.

Music festivals in Moldova include The Faces of Friends, held in the town of Cahul; this festival was founded in 1996.

The culture of Romania is the product of its geography and its distinct historical evolution. It is theorized and speculated that Romanians and the Vlachs are the combination of descendants of Roman colonists and people indigenous to the region who were Romanized.

The culture of Moldova is influenced primarily by the Romanian origins of its majority population, while also being heavily indebted to the Slavic and minority Gagauz populations. The traditional Latin origins of Romanian culture reach back to the 2nd century, the period of Roman colonization in Dacia. 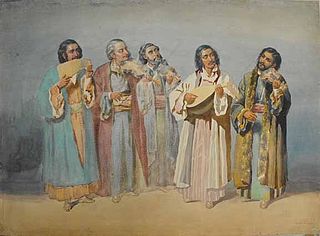 The Romanian word Lăutar denotes a class of musicians. Most often, and by tradition, lăutari are members of a professional clan of Romani musicians, also called țigani lăutari. The term is derived from lăută, the Romanian word for lute. Lăutari usually perform in bands, called taraf.

Cahul is a city and municipality in southern Moldova. The city is the administrative center of Cahul District; it also administers one village, Cotihana. As of 2014 census, the city has had a population of 30,018. 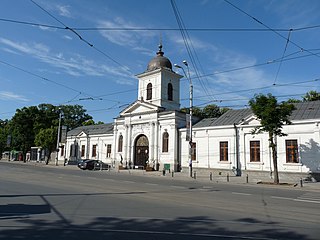 Șerban Vodă cemetery is the largest and most famous cemetery in Bucharest, Romania.

Moldova has participated in the Eurovision Song Contest 15 times, debuting in 2005. The country's best result is a third-place finish for SunStroke Project in 2017, with their song "Hey, Mamma!".

Natalia is a female given name with the original Late Latin meaning of "Christmas Day". It is currently used in this form in Italian, Romanian, Spanish, Portuguese, Greek, Russian, Ukrainian, Bulgarian and Polish. Other forms and spellings include Natalie/Nathalie, Natálie (Czech), Natália/Nathália, Natalya/Nataliya, Nataliya/Natalya, Nataliia, Natālija (Latvian), Natalija, Natàlia (Catalan) and ნატალია (Georgian).

Pavel Stratan is a Moldovan popular singer. His first album, Amintiri din copilărie, was released in 2002.

Natalia Barbu is a Moldovan singer and songwriter. She is best known for representing Moldova in the Eurovision Song Contest 2007 with the song "Fight".

Nelea Ciobanu-Mărgineanu, known professionally as Nelly Ciobanu is a Moldovan singer. Ciobanu graduated from music college of the city of Tiraspol and later made her debut on stage in 1993, with her brother as part of duo "Master Dinamit". She represented Moldova in the Eurovision Song Contest 2009 with the song "Hora din Moldova", placing 14th. 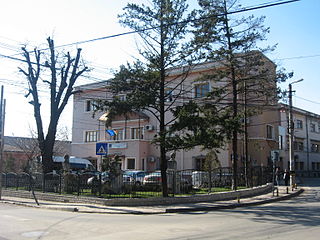 The George Enescu National University of Arts is a public university in Iaşi, Romania, founded in 1860. It was named in honor of the composer George Enescu. 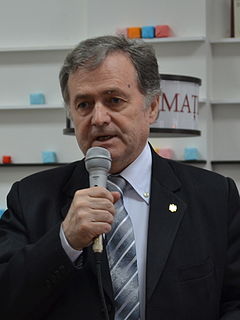 Parliamentary elections were held in the Moldavian SSR in February and March 1990 to elect the 380 members of the Supreme Soviet. They were the first and only free elections to the Supreme Soviet of the MSSR, and although the Communist Party of Moldova was the only registered party allowed to contest the election, opposition candidates were allowed to run as independents. Together with affiliated groups, the Popular Front of Moldova won a landslide victory. Candidates who were openly supporters of the Popular Front won about 27% of seats; together with moderate Communists, mainly from rural districts, they commanded a majority.

Simion Ghimpu was a writer from Moldova.

The Democratic Forum of Romanians in Moldova is a civic movement, which brings together over 120 NGOs, several leading public organizations of Moldova and a whole number of academicians, writers, journalists. In 2006, the organization claimed 100,000 members. 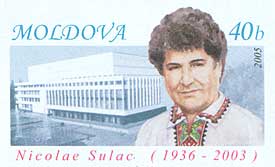 Nicolae Sulac was a folk music singer from the Republic of Moldova.

In Romania, the syntagm popular music is used to denote a musical genre based on folklore, but distinct from it. The distinction is both in form and essence and it arises mainly from the commercial aspect of the popular music. In English the term is ambiguous since it could also refer to Romanian pop music.

Nicolae Glib is a Moldovan folk music singer born on May 10, 1949 in Pepeni village, Sîngerei district, Republic of Moldova.