Last updated May 09, 2021
Swedish singer
Not to be confused with Marit Bergman.

France has participated in the Eurovision Song Contest 62 times since its debut at the first contest in 1956. France is one of only seven countries to be present at the first contest, and has been absent from only two contests in its history, missing the 1974 and 1982 contests. Along with Germany, Italy, Spain and the United Kingdom, France is one of the "Big Five" who are automatically allowed to participate in the final because they are the five biggest financial contributors to the European Broadcasting Union (EBU). France has won the contest five times. 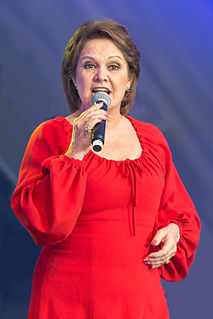 Anne-Marie David is a French singer. She has represented both Luxembourg and France at the Eurovision Song Contest, winning in 1973 and placing third in 1979.

Monaco has participated in the Eurovision Song Contest 24 times since its debut in 1959. The country's only win in the contest came in 1971 when Séverine performed "Un banc, un arbre, une rue". As a result, Monaco was expected to host the contest in 1972, but declined. As of 2020, Monaco is the only microstate which has won the contest.

Linda Martin is a singer and television presenter from Northern Ireland. She is best known in Europe as the winner of the 1992 Eurovision Song Contest with the song "Why Me?", and in Ireland as a member of the 1970s/1980s band Chips.

Fred Roger Pontare is a Swedish musician. He lives in Vingåker, Södermanland County. 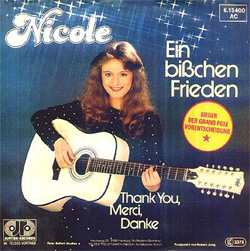 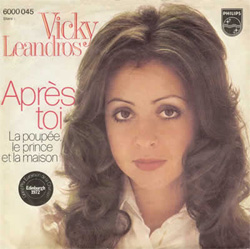 "Après toi" was the winning song of the Eurovision Song Contest 1972 performed in French by Greek singer Vicky Leandros, representing Luxembourg. The song was co-written by Leandros' father Leandros Papathanasiou, also known as Leo Leandros, under his pseudonym Mario Panas. This was Vicky Leandros' second entry in the Contest. In 1967 she had finished fourth with "L'amour est bleu" which subsequently went on to become a worldwide hit when covered by French orchestra leader Paul Mauriat.

"Tu te reconnaîtras", sung in French by French singer Anne-Marie David representing Luxembourg, was the winning song at the Eurovision Song Contest 1973 – the first time a country won the contest two years in succession without sharing the victory, as Spain in 1969. Vicky Leandros had won the 1972 Contest for Luxembourg with "Après toi" and the 1973 edition was consequently held in the Luxembourgish capital. Performed eleventh on the night – after Italy's Massimo Ranieri with "Chi sarà con te" and before Sweden's Nova with "You're Summer" – it was awarded a total of 129 points, placing it first in a field of 17.

Siw Gunnel Margareta Malmkvist is a Swedish singer and actress popular in Scandinavia and West Germany. She had a number one hit in West Germany in 1964 with "Liebeskummer lohnt sich nicht", and on 18 July 1964 she became the first Swede to have a hit on the US Billboard Hot 100 chart, when "Sole Sole Sole", a duet with Italian singer Umberto Marcato, entered the chart, peaking at No. 58.

Melodifestivalen 2000 was the selection for the 40th song to represent Sweden at the Eurovision Song Contest. It was the 39th time that this system of picking a song had been used; 1,394 songs were submitted to SVT for the competition. The final was broadcast on SVT2 and Sveriges Radio's P4 network. Roger Pontare won the MF again with the rock-inspired ballad "När vindarna viskar mitt namn", donning a folk-inspired costume and featuring Sámi dancers during his performance. The winning song was performed later in English at the Eurovision Song Contest as "The Spirits Are Calling My Name", placing seventh among 24 entrants.

Yardena Shulamit Arazi is an Israeli singer and entertainer.

Family Four were a Swedish pop group who recorded during the 1960s and 1970s. They were made up of Berndt Öst, Marie Bergman, Agnetha Munther and Pierre Isacsson. They won Melodifestivalen twice, in 1971 with "Vita vidder" and in 1972 with "Härliga sommardag". They went on to represent Sweden in the Eurovision Song Contest on these two occasions. They finished sixth in 1971 and 13th in 1972.

Germany competed at the Eurovision Song Contest 1969, held in Madrid, Spain. ARD, the German broadcaster, used a national final to select their entry.

María Isabel Llaudes Santiago, better known by her stage name Karina, is a Spanish singer who had her biggest success in the late 1960s until the mid-1970s. She was born in Jaén, Andalusia to Trinidad Santiago and Salvador Llaudes.

The United Kingdom has participated in the Eurovision Song Contest 62 times. It first took part in the second contest in 1957 and has entered every year since 1959. Along with Sweden and the Netherlands, the UK is one of only three countries with Eurovision victories in four different decades. It is one of the "Big 5" nations, along with France, Germany, Italy and Spain, who are automatically prequalified for the final each year as they are the biggest financial contributors to the European Broadcasting Union (EBU). The British public broadcaster, the BBC, broadcasts the event and organises the national selection to choose the entry. The United Kingdom has won the Eurovision Song Contest five times, and has finished as runner-up on a record fifteen occasions. The UK has hosted the contest a record eight times, four times in London and once each in Edinburgh (1972), Brighton (1974), Harrogate (1982) and Birmingham (1998).

Marie Line, also known as Marie Line Marolany or Maro Lany, is a French singer who took part in the Eurovision Song Contest 1998 for France with the song "Où aller".

Lena Marianne Andersson is a Swedish singer, scoring several hits in the early 1970s. Andersson was signed at 17-years-old as a Polar recording artist in 1971. Benny & Björn of ABBA wrote a song for her which placed third in the 1972 Swedish Eurovision selection contest. Andersson also recorded as a backing singer for ABBA.