Siw Gunnel Margareta Malmkvist (born 31 December 1936) is a Swedish singer and actress [1] [2] popular in Scandinavia and West Germany. [3] She had a number one hit in West Germany in 1964 with "Liebeskummer lohnt sich nicht" ("Lovesickness Is Not Worthwhile"), and on 18 July 1964 she became the first Swede to have a hit on the US Billboard Hot 100 chart, when "Sole Sole Sole", a duet with Italian singer Umberto Marcato, entered the chart, peaking at No. 58.

Malmkvist was born in Landskrona, Skåne County, Sweden, the youngest child of Sigrid and Albert Malmkvist. She had eight siblings, and her early childhood was marked by World War II; although Sweden was a neutral country, the risk of invasion was felt acutely in Landskrona, located only 22 km from the Danish capital on the other side of Öresund. Albert Malmkvist was called up as a soldier. [4]

In 1955, the 18-year-old Malmkvist won a talent show, which resulted in her being hired as a singer by Arne Domnérus. Her first recording, Tweedle Dee, was released in the same year. She was signed by the record company Metronome in 1958, being touted as the new Alice Babs, and in 1959 she became a TV host, in the entertainment Stora Famnen created by Lennart Hyland. [4]

Having had some 40 hits on Swedish radio chart Svensktoppen and 20 on the German singles chart, she has altogether recorded about 600 songs (and has made recordings in ten different languages: Swedish, Danish, Norwegian, Finnish, Dutch, German, English, French, Italian and Spanish) throughout the past five decades, which makes her one of the most productive and successful Swedish female singers.

As an actor, Malmkvist has performed in stage plays, musicals and in films. She played Pippi Longstocking in the popular children musical production of Astrid Lindgren's Pippi Longstocking in 1980, appeared in the musical version of Some Like It Hot (see Sugar ) and she played the part of Luisa in the original Swedish – and European – production of Maury Yeston's musical Nine in 1983. In 2002, she appeared as the Mother in Hasse Alfredson's stage play Lille Ronny at Maximteatern. Together with actor Thorsten Flinck, she recorded a popular Swedish cover of Nick Cave/Kylie Minogue's 1995 hit "Where the Wild Roses Grow".

In 2008 and 2009, she played the part of Fräulein Schneider in the musical Cabaret at Stockholms Stadsteater, directed by Colin Nutley.

Malmkvist has been a contestant in the Swedish Melodifestivalen, which is the qualifying contest for the Eurovision Song Contest, as well as at the European event, several times. She represented Sweden at the Eurovision Song Contest 1960 in London with "Alla andra får varann". In the following year Malmkvist sang "April, april" together with Gunnar Wiklund at that year's Melodifestivalen; the song won, and was performed by Barbro "Lill-Babs" Svensson as the Swedish representative at the international Contest, held in Cannes.

At the Eurovision Song Contest 1969 in Madrid, Malmkvist sang the West German entry "Primaballerina", which finished in the 9th place. She performed the song "C'est la vie" together with Towa Carson and Ann-Louise Hanson, at Melodifestivalen 2004.

Malmkvist was supposed to be a celebrity dancer in Let's Dance 2020 on TV4, but because of the coronavirus restrictions she could not participate. [5]

"In the Club" is an English language song by Swedish singer Danny Saucedo. The song is written by Figge Boström, Peter Boström and Saucedo himself. Saucedo participated in Melodifestivalen 2011, singing the song, in a bid to represent Sweden in the Eurovision Song Contest 2011 in Düsseldorf, Germany. 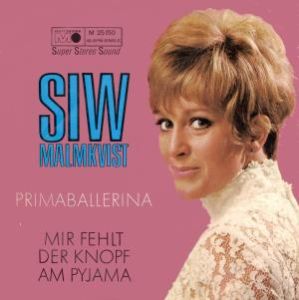 "Primaballerina" is a 1969 song performed in German by Swedish singer Siw Malmkvist and written by Hans Blum. It was the German entry in the Eurovision Song Contest 1969. Malmkvist was the second of three female Scandinavian schlager artists to represent Germany in the contest in the late 1960s and early 1970s, the first being Norwegian Wenche Myhre in 1968 with "Ein Hoch der Liebe" and the third Danish Gitte Hænning with "Junger Tag" in 1973. Malmkvist had previously also represented her native Sweden in the 1960 contest with "Alla andra får varann". 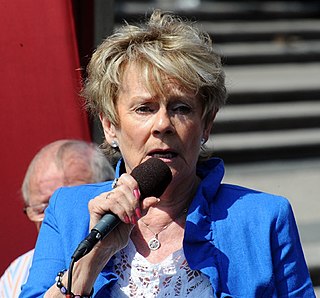 Towa Carson, born on 31 March 1936 in Eskilstuna, Sweden, is a Swedish schlager singer. She debuted in 1954 and had the most success in the 1950s and 1960s, with hits such as "De tre klockorna" (Swedish version of "The Three Bells", which peaked at No. 4, "Spara sista dansen för mig", which also peaked at No. 4, and her biggest hit "Jag måste ge mig av" which peaked at No. 3. She recorded many duets with Lasse Lönndahl, the most successful being "Visa mig hur man går hem" which peaked at No. 12. The Swedish national radiochart Svensktoppen contains 25 "Towa-hits". She participated in the Swedish song contest Melodifestivalen in 1967 and in 1968. Unlike many other Scandinavian schlager-singing stars, she never sought international career, despite allegedly receiving offers from the US and West Germany. 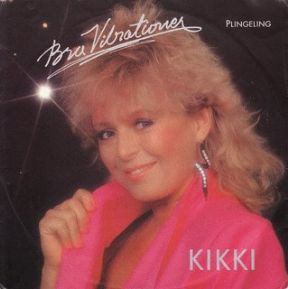 "Bra vibrationer", written by Ingela Forsman and composed by Lasse Holm, was the Swedish entry to the Eurovision Song Contest 1985, performed by Kikki Danielsson.

Sweden chose its entry for Eurovision Song Contest 1960 by the national final, Melodifestivalen 1960. The winning song, "Alla andra får varann" was performed once by Östen Warnerbring and once by Ingrid Berggren. However Sveriges Radio decided that Siw Malmkvist would represent Sweden, as she had been denied that the previous year.

Sweden chose their entrant for the Eurovision Song Contest 1961 through Melodifestivalen 1961. The song "April, april", performed once with Siw Malmkvist, once with Gunnar Wiklund, won. However, none of them was considered acceptable for singing in ESC, so Lill-Babs was chosen as representative instead. In the contest, once more held in Cannes, she finished in 14th place.

Sweden chose their entrant for Eurovision Song Contest 1969 through Melodifestivalen 1969. A tie occurred between two songs, but after additional voting, the song "Judy, min vän" with Tommy Körberg was selected. It was written by Roger Wallis and Britt Lindeborg. The other song, "Hej clown" was written by Lasse Berghagen and later ABBA member Benny Andersson.

Östen Warnerbring, also known as Östen med Rösten, was a Swedish singer, musician, composer and lyrics writer who mastered several musical genres. He started out as a jazz musician but over the years, he became known as a singer of other popular music, such as schlager music, and of Swedish poetry put into music by himself. In the 1970s, he became one of the first Swedish artists to use his native accent, of the province of Scania (Skåne) in the south of Sweden, also while singing. 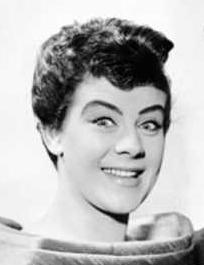 Brita Kerstin Gunvor Borg was a Swedish singer, actress, and variety show artist. Her variety show career spanned from 1943 into the 1970s, while her singing career trailed away at the end of the 1960s. However, she was still an active actress in the 1980s. Borg represented Sweden in the Eurovision Song Contest 1959 in Cannes.

Germany competed at the Eurovision Song Contest 1969, held in Madrid, Spain. ARD, the German broadcaster, used a national final to select their entry.

"Augustin" was the Swedish entry at the Eurovision Song Contest 1959, performed in Swedish by Brita Borg. The song had been the winner of Melodifestivalen 1959, where it had been performed by Siw Malmkvist. 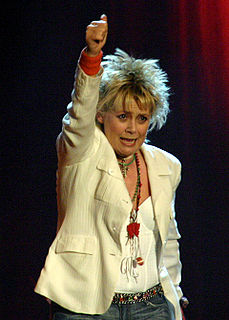 Gitte Hænning is a Danish singer and film actress, who rose to fame as a child star in the 1950s.

"Alla andra får varann" is a song by Swedish singer Siw Malmkvist, which represented Sweden at the Eurovision Song Contest 1960, performed in Swedish. The song had been the winner of Melodifestivalen 1960, where it had been performed by Östen Warnerbring and Inger Berggren.

"April, april" is a song by Swedish singer Lill-Babs, which represented Sweden at the Eurovision Song Contest 1961, performed in Swedish.

"Sjörövar-Fabbe" is a Swedish shanty-style children's song originally written by Georg Riedel and Astrid Lindgren for the film Pippi in the South Seas in 1970. The lyrics are about Pippi Longstocking's great grandfather Fabian "Fabbe" Longstocking who was a feared pirate captain on all seven seas. The last line of the chorus "Tjoa hadelittan lej" is a nonsense phrase. The song was originally performed by Pippi Longstocking actress Inger Nilsson who published it in 1975 as B-side of the single "Här kommer Pippi Långstrump". In 2001, it was covered as a crossover version with the melody of Dio's "Holy Diver" by the Swedish metal band Black Ingvars. Other Swedish versions are by Plura Jonsson in 1999, by Siw and Tove Malmkvist in 2003 and by Johanna Grüssner and Mika Pohjola who performed a jazz version of this song in 2006. A Norwegian version with lyrics by Marit Trulsrud is by Anita Hegerland and Frank Cook from 1970. There is also a German version called "Seeräuber-Opa Fabian" with lyrics by Helmut Harun. It was first performed by actress Eva Mattes in 1970 and covered in 2012 by German singer Lena Meyer-Landrut for the compilation album Giraffenaffen.

Britt Damberg was a Swedish Schlager and Jazz singer and occasional actress.

This is a list of Swedish television related events from 1961.