Tsogo Sun means 'resurrection' or 'new life' – a term that mimics the daily rising of the sun in Setswana. [11]

The group was one of the largest Johannesburg Stock Exchange listed companies in the hotel and tourism sector with a market capitalisation of R30.8 billion. [13] [14] Since the unbundling [15] of its business into separate hotels and gaming interests in June 2019, Tsogo Sun Hotels (now Southern Sun) and Tsogo Sun Gaming have been listed separately on the JSE. Tsogo Sun Gaming (TSG [16] ) and Tsogo Sun Hotels (TGO [17] trading as Southern Sun) are both owned by Hosken Consolidated Investments (47%) [18] and public shares. [19]

The group was established in 1969, when hotelier Sol Kerzner founded the chain of Southern Sun Hotels in partnership with South African Breweries. [20]

Prior to 1994, the group's gambling operations were limited to those hotels located in Apartheid era bantustans, as gambling in the rest of South Africa was heavily restricted. When the new democratic government came to power, gambling was legalised, which enabled the group to add 14 gaming destinations to its portfolio. [21]

Through a process of bid applications, the group acquired five casino licences: Emnotweni (Nelspruit), The Ridge, Hemingways, Montecasino and Suncoast. [22]

An additional two casinos, The Caledon and Blackrock (formerly known as Century Casino), were added to the group's portfolio in 2009 through the acquisition of Century Resorts Limited and Winlen Casino Operators (Pty) Limited. Subsequently a further seven casinos were added to the portfolio through the reverse buy-out of Gold Reef Resorts in 2011: Gold Reef City, Silverstar, Queens, Mykonos, Goldfields, Golden Horse and Garden Route. [23] [24] [25]

In May 2014, the group announced that it had entered into transaction agreements resulting in Tsogo Sun acquiring a 40% equity interest each in SunWest International and Worcester Casinos. This transaction gave the group a stake in all five casinos located in the Western Cape. [26]

The group notified shareholders on 15 March 2019 [30] of a proposed restructuring that would result in a separation of hotel and gaming interests and separate JSE listing [31] of Tsogo Sun Hotels and Tsogo Sun Gaming.

Tsogo Sun Gaming includes casinos precincts such as Montecasino and Gold Reef City as well as ownership of Galaxy Bingo [39] that operates 23 bingo venues across South Africa and V Slots [40] a leading supplier of Limited Pay Out slot machines.

The South African Graduate Employers Association [41] (SAGEA) published its list of the leading graduate employers for 2021, with Tsogo Sun Hotels being chosen as a winner in the leisure sector. [42] 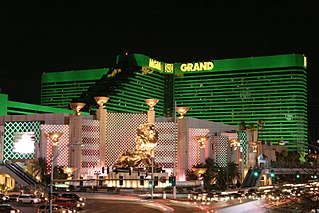 SABMiller plc was a South African multinational brewing and beverage company headquartered in Woking, England on the outskirts of London until 10 October 2016 when it was acquired by Anheuser-Busch InBev. Prior to that date, it was the world's second-largest brewer measured by revenues and was also a major bottler of Coca-Cola. Its brands included Fosters, Miller, and Pilsner Urquell. It operated in 80 countries worldwide and in 2009 sold around 21 billion litres of beverages. Since 10 October 2016, SABMiller is a business division of Anheuser-Busch InBev SA/NV, a Belgian multinational corporation with headquarters in Leuven.

Solomon Kerzner, was a South African accountant and business magnate. He founded both of South Africa's largest hotel groups, the Southern Sun Hotel Group and Sun International. He was also the Founder, Chairman, and CEO of Kerzner International. During his career in the resort industry he was involved in various political and business controversies.

JSE Limited is the largest stock exchange in Africa. It is located in Sandton, Johannesburg, South Africa, after it moved from downtown Johannesburg in 2000. In 2003 the JSE had an estimated 473 listed companies and a market capitalisation of US$182.6 billion, as well as an average monthly traded value of US$6.399 billion. As of March 2022, the market capitalisation of the JSE was at US$1.36 trillion.

888 Holdings PLC, known commonly as 888.com, is a public company which owns several popular gambling brands and websites, including 888sport, 888casino and 888poker. 888 is based in Gibraltar. It is listed on the London Stock Exchange and is a constituent of the FTSE 250 Index.

Concor Holdings (Proprietary) Limited. is a South African construction company. It is active throughout Southern Africa, involved in mining, civil engineering, building and road projects. Concor returned as an independent brand in late 2016. Suncoast Casino, Hotels and Entertainment is an entertainment complex situated at the northern end of Durban's Golden Mile, adjacent to the Kings Park Sporting Precinct. Besides the casino, the complex houses many restaurants, a beach bar, cinemas and its own semi-private beach, which was rated as one of the top 3 beaches in South Africa. The design of the complex is aimed to complement the vast art deco heritage that is found across Durban. Suncoast houses the largest Casino complex in South Africa. 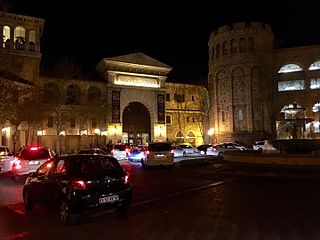 Montecasino, popularly shortened to Monte, is a leisure and casino complex in Fourways, Sandton in Gauteng, South Africa. It was designed by American company Creative Kingdom Inc. and built by South African architects Bentel Associates International at a cost of R1.6 billion. It first opened its doors on 30 November 2000 and it currently attracts over 9.3 million visitors annually. It is themed after Monte Cassino. It has been designed to replicate an ancient Tuscan village. The main casino building has a fake sky, painted on the ceiling, inside going from light on one side to dark at the other.

Sun InternationalHotels Limited is a resort hotel chain and casino destination from South Africa created by Sol Kerzner, best known for its Sun City Resort near Rustenburg in the North West Province. Specialising in gaming, hospitality and entertainment, the company owns 42.5% of the South African casino market. Sun International Hotels is headquartered in the Bahamas, on Paradise Island, which is the world's largest island resort, 70% of which is owned by the company. Sun International was incorporated in South Africa in 1967 and also runs a head office in Sandton, Johannesburg.

Gambling in South Africa has been heavily restricted since 1673, with South Africa's Gambling Act of 1965 officially banning all forms of gambling except betting on horse racing which existed as a sporting activity.

African Sun Limited, is a Zimbabwe based hospitality management company established in 1968. It operates in the hospitality and leisure industry through a number of hotels, resorts, casinos and timeshare operations throughout Zimbabwe and South Africa. It is listed on the Zimbabwe Stock Exchange and is a constituent of the Zimbabwe Industrial Index.

Gambling in Metro Manila has been regulated since 1976 when the Philippine Amusement and Gaming Corporation (PAGCOR) was created through Presidential Decree 1067. Under its charter promulgated in 1983, the 100% state-owned PAGCOR, running under the direct supervision of the Office of the President, serves three crucial roles: to regulate and operate all games of chance in the country, particularly casino gaming; generate funds for the government's infrastructure and socio-civic projects; and boost local tourism.

The ADvTECH Group is a JSE listed company in South Africa (JSE:ADH). ADvTECH operates within the education and recruitment industries in South Africa and the rest of Africa.

Emerald Resort & Casino is a hotel and casino located at a private estate on the banks of the Vaal River in Vanderbijlpark, South Africa. The casino opened in 1997.

Triangle House, originally known as Safmarine House, is a 104-metre-tall (341 ft) building in Cape Town, South Africa. Construction work began in 1991 and it was completed in 1993 by Murray & Roberts Construction, now known as Concor at a cost of US$6,000,000. it was the last skyscraper built in Cape Town until the completion of the Portside Tower 21 years later in 2014. The building was originally named after its first occupant, the South African shipping company Safmarine. The building was originally owned by Old Mutual Investment Group Property Investments.

A2X Markets was founded by Sean Melnick, Ashley Mendelowitz and Kevin Brady, individuals with experience in financial markets and technology. Their goal was to create a new South African exchange to bring healthy competition to the South African Marketplace.

Cape Town Tigers is a South African basketball club based in Cape Town. The team is located in the Gugulethu township. Established in 2019, the team is coached by Relton Booysen. In 2021, the club won the South African national championship in its debut season.