The University of Puerto Rico (Spanish : Universidad de Puerto Rico, UPR) is the main public university system in the U.S. Commonwealth of Puerto Rico. It is a government-owned corporation with 11 campuses and approximately 58,000 students and 5,300 faculty members. [3] UPR has the largest and most diverse academic offerings in the commonwealth, with 472 academic programs of which 32 lead to a doctorate. [4]

In 1900, at Fajardo, the Escuela Normal Industrial (normal school) was established as the first higher education center in Puerto Rico. Its initial enrollment was 20 students and 5 professors. [5] The following year it was moved to Río Piedras. On March 12, 1903, the legislature authorized founding of the University of Puerto Rico, and that day the "Escuela Normal" was proclaimed as its first department. [6]

1908 - The Morrill-Nelson Act is extended to Puerto Rico, making the University a "Land Grant College," which authorizes use of federal land to establish colleges of agriculture, science and engineering. [7]

1910 - Establishment of the College of Liberal Arts.

1913 - The Departments of Pharmacy and Law were established.

1923 - The University Act of 1923- the University reorganized administratively it independent Insular Department of Education, provides the Board of Trustees as the governing board, and make the position of Rector as the principal officer. In 1924 the governor appointed the first Rector.

1924 - The administrative structure and identity of the University of Puerto Rico becomes independent from the Department of Public Instruction.

1926- The School of Commerce (later School of Business Administration) and the School of Tropical Medicine were established.

1927 - Opening of the first graduate program: the Master of Arts in Hispanic Studies.

1935 - The U.S. Congress extended to Puerto Rico the benefits of Bankhead-Jones Act, which provided funding for research and the construction of more buildings.

1936 - 1939 - Major structures in Spanish Renaissance style are built in the quadrangle in Río Piedras, including buildings such as the Tower Theatre.

1942 - Act No. 135 of May 7, 1942, amendment to the University, created the Higher Education Council as the governing board of the institution and regulator of the higher education system in Puerto Rico.

1946 - The University received accreditation from the Middle States Association of Colleges and Schools.

1966 - Act No. 1 of 1966, restructuring the university. The system change to three campuses-Río Piedras, Mayagüez and Medical Sciences.

2010–2011 University of Puerto Rico strikes where a series of strikes which occurred as a result of administrative budget cuts and an attempt to impose a $800 quota for students.

July 2010, the Middle States Commission on Higher Education placed the accreditation of the University on probation citing concerns about shortfalls in the governance of the institution. [8] By the end of 2011, all 11 campuses had regained full accreditation after demonstrating significant progress in this area.

2017- The UPR's staff organized a strike in opposition to budget cuts proposed by the Financial Oversight and Management Board for Puerto Rico. [9]

After the impact of Hurricane Maria the University suffered damages totaling over $175 million. The University system was still in the process of acquiring FEMA funding to repair damages and as a result still suffered from structural damage months after the hurricane. [10] The hurricane also affected the process of accreditation since eight campuses where in non compliance according to of the Middle States Commission on Higher Education. [11] The eleven campuses opened within two months of Hurricane Maria, offering a sense of structure and normalcy for professors and students. [12]

2019- During Jorge Haddock tenure the university newspaper, Diálogo, after 32 years in print, was moved online and employees were laid off until only the editor and an assistant remained. They were reassigned, while the newspaper was moved from the central administration to the Arecibo campus. [13]

2021- In June the Financial Oversight and Management Board cut $94 million from the UPR budget which would have drastically affected the institutions ability to operate. [14] The local government intervened and assigned the money necessary before the August semester commenced. [15]

The board of trustees is the governing body of the University of Puerto Rico. Its membership usually consists of private citizens who are supposed to represent the public interest, faculty members, student representatives, and may or may not include an exofficio political officeholder (typically the Secretary of Education of Puerto Rico). This inconsistency happens as the board's structure changes whenever a political party gains power, usually every 4–8 years. Once both the governor and the legislature of Puerto Rico belong to the same party, one of the earliest laws amended is the one governing the university in order to change the board's composition. Once the new board is settled in, one of the first acts enacted by the new board is to appoint a new university president. This constant back and forth effectively makes the university highly politicized and, consequently, changes the vision, strategy, and plans of the university every 4–8 years according to the political party in power.

Of the different trustees, the governor is usually required to appoint eight trustees "for the public interest" with the advice and consent of the Senate. It is through these trustees, along with the incumbent political officeholder which serves as exofficio, the way in which the governor and the political party in power effectively control the state university. The faculty and student trustees are appointed by the community of the university system. Two of the "public interest trustees" are appointed to nine-year terms, another two are appointed to seven-year terms, and the remaining four are appointed to five-year terms. The faculty and student trustees serve one-year terms. Trustees "representing the public interest" may be reappointed to additional terms as long as the total time served does not exceed eight years. Trustees representing faculty or students may be reappointed to additional terms as long as they remain being a faculty or student within the system while serving.

On April 30, 2013 governor Alejandro García Padilla enacted Act 13 of 2014 together with the 17th Legislative Assembly. The act effectively replaced the incumbent board with an entirely new board. In 2017 the board was changed once again by governor Ricardo Rosselló. [16]

UPR broadcasts both in FM (to some areas) and online. The campus radio station is called "WRTU Radio Universidad de Puerto Rico", and it was established in 1980. This is a public radio station with diverse musical and news programming. [18]

UPR has the highest selectivity index of all colleges and universities in Puerto Rico, it has also maintained a systemwide admission rate of 67% since 1997. Its enrollment rate has surpassed 90% during the past five academic years. [19] In terms of tuition, the cost per credit is US$124 per undergraduate credit and $300 per graduate credit.

The university has a classification of "R2: Doctoral Universities – High research activity". [20]

On October 15, 2010 it was awarded over $25 million from the National Science Foundation (NSF) to support research in nanotechnology. The organization within the University of Puerto Rico impacted is called Puerto Rico EPSCoR (Experimental Program to Stimulate Competitive Research). Since its creation 24 years ago, Puerto Rico EPSCoR has received over $180 million from NSF, NASA, the U.S. Department of Energy, and the U.S. Department of Defense. [21]

On August 24, 2020 the University announced ten investigations for preventing and mitigating the spread of Covid19 as part of $1.7 million the institution received from the local government. [22]

The University of Puerto Rico:

The system's only school of engineering at the Mayagüez campus is accredited by ABET and graduates more than 600 engineers per year. The school was chosen as the top engineering school for Hispanics by Hispanic Engineer & Information Technology Magazine. [32]

In 2020 the director of NASA grant consortium in Puerto Rico doctor Gerardo Moller, stated that 25% of the Hispanic employees hired by NASA are graduates of the UPR. [33]

Research activity, measured in terms of external funds received, has grown exponentially since 1985, doubling every five years. In 2007-2008 the UPR received over $87 million for research. [34] 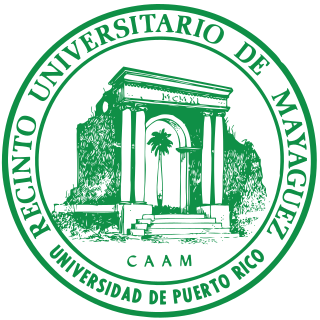 The University of Puerto Rico, Mayagüez Campus (UPRM) or Recinto Universitario de Mayagüez (RUM) in Spanish, is a public land-grant university in Mayagüez, Puerto Rico. UPRM is the second-largest university campus of the University of Puerto Rico system. In addition to its status as a land-grant university, it is also a member of the sea-grant and space-grant research consortia. In 2009, the campus population was composed of 12,108 students, 1,924 regular staff members, and 1,037 members of the education staff. In 2013, the student population remained relatively steady at 11,838, but the instructional faculty dropped to 684. In the second semester of 2019 around 12,166 students where enrolled. 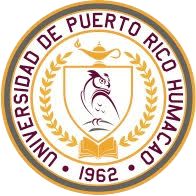 The University of Puerto Rico, Humacao Campus is a public college in Humacao, Puerto Rico. It is part of the University of Puerto Rico. Its campus is home to the UPRH Astronomical Observatory and the college graduates more majors in chemistry, physics, and mathematics than any other higher education institution on the island. UPRH has been accredited by the Middle States Commission on Higher Education (MSCHE) since 1965. 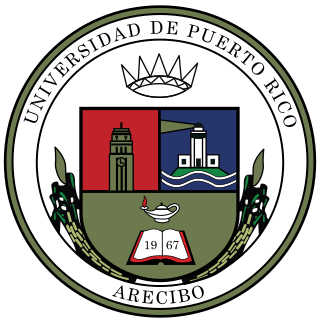 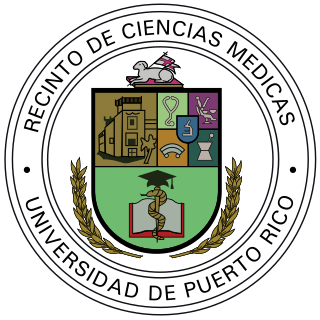 The Ana G. Méndez University (UAGM) is a private university system with its main campus in San Juan, Puerto Rico.

The Inter American University of Puerto Rico is a private Christian university with its main campus in San Germán, Puerto Rico. It also has campuses in Aguadilla, Arecibo, Barranquitas, Bayamón, Fajardo, Guayama, Ponce, and San Juan. The university also has three professional schools: School of Optometry, School of Law, and the School of Aeronautics. The Inter offers academic programs in 11 teaching units. It was founded in San Germán in 1912. The San Germán campus is also the home to the Inter American School, a private co-educational college-preparatory school. 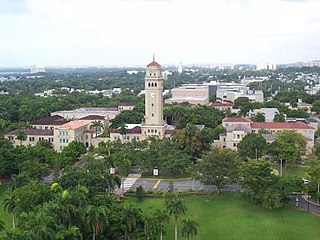 Jaime Benítez Rexach was a Puerto Rican author, academic and politician. He was the longest serving chancellor and the first president of the University of Puerto Rico. 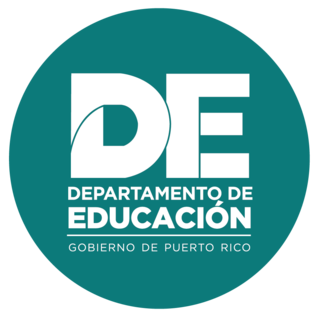 The Puerto Rico Department of Education (PRDOE) is one of the statewide public education system in the United States, with. The PRDOE is the state education agency responsible of managing public schools in Puerto Rico as well as the island's education system and curricula. The department, headquartered in Hato Rey, San Juan, is the result of a United States state department of education. It is also the largest agency of the executive branch of Puerto Rico, with, as of 2019, an annual budget of more than $3.5 billion USD and over 72,000 staff—including more than 41,000 teachers, and as of 2020 the department is the third-largest school district in the United States by enrollment, with over 276,413 students and 857 schools.

The 2010–2011 University of Puerto Rico strikes (UPR) refer to the student strikes which took place between May 2010 and June 2010 in ten of the university system's eleven constituent institutions, as well as the protests that occurred from October 2010 to February 2011.

Samuel Silva Gotay is a sociologist of religion of Puerto Rico and Latin America. He was born in Ponce, Puerto Rico in 1935.

Jorge Haddock Acevedo is a Puerto Rican engineer and academic administrator serving as the president of the University of Puerto Rico (UPR). On July 7, 2021, the Governing Board of the UPR unanimously requested his resignation and his term ended on July 31, 2021.

Waleska Crespo Rivera is a Puerto Rican businessperson and academic administrator. She is president of Universidad Central del Caribe.

Mueve tu Universidad is a fundraising program established in 2018 to provide funds to the University of Puerto Rico (UPR) by allowing the option of donating money when paying the annual motor vehicle registration fee or car tag (marbete).