Verse in the uncountable (mass noun) sense refers to poetry in contrast to prose. [3] Where the common unit of verse is based on meter or rhyme, the common unit of prose is purely grammatical, such as a sentence or paragraph. [4]

Verse in the second sense is also used pejoratively in contrast to poetry to suggest work that is too pedestrian or too incompetent to be classed as poetry.

Rhymed verse is historically the most commonly used form of verse in English. It generally has a discernible meter and an end rhyme. [5] [6]

I felt a Cleaving in my Mind –  As if my Brain had split –  I tried to match it – Seam by Seam –  But could not make them fit.  The thought behind, I strove to join  Unto the thought before –  But Sequence ravelled out of Sound  Like Balls – upon a Floor.  —Emily Dickinson

Of man's first disobedience, and the fruit  Of that forbidden tree, whose mortal taste  Brought death into the world, and all our woe,  With loss of Eden, till one greater man  ....  —John Milton (from Paradise Lost )

Free verse is usually defined as having no fixed meter and no end rhyme. Although free verse may include end rhyme, it commonly does not. [9] [10]

Whirl up, sea—  Whirl your pointed pines  Splash your great pines  On our rocks,  Hurl your green over us,  Cover us with your pools of fir.  —H.D. 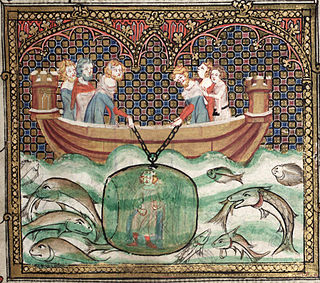 An epic poem, or simply an epic, is a lengthy narrative poem typically about the extraordinary deeds of extraordinary characters who, in dealings with gods or other superhuman forces, gave shape to the mortal universe for their descendants.

In poetry, enjambment is incomplete syntax at the end of a line; the meaning 'runs over' or 'steps over' from one poetic line to the next, without punctuation. Lines without enjambment are end-stopped. The origin of the word is credited to the French word enjamber, which means 'to straddle or encroach'. 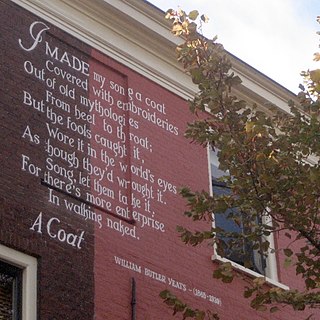 In poetry, a stanza is a group of lines within a poem, usually set off from others by a blank line or indentation. Stanzas can have regular rhyme and metrical schemes, but they are not required to have either. There are many different forms of stanzas. Some stanzaic forms are simple, such as four-line quatrains. Other forms are more complex, such as the Spenserian stanza. Fixed verse poems, such as sestinas, can be defined by the number and form of their stanzas. The term stanza has a similar meaning to strophe, though strophe sometimes refers to an irregular set of lines, as opposed to regular, rhymed stanzas.

Blank verse is poetry written with regular metrical but unrhymed lines, almost always in iambic pentameter. It has been described as "probably the most common and influential form that English poetry has taken since the 16th century", and Paul Fussell has estimated that "about three quarters of all English poetry is in blank verse".

Syllabic verse is a poetic form having a fixed or constrained number of syllables per line, while stress, quantity, or tone play a distinctly secondary role — or no role at all — in the verse structure. It is common in languages that are syllable-timed, such as French or Finnish — as opposed to stress-timed languages such as English, in which accentual verse and accentual-syllabic verse are more common.

Scansion, or a system of scansion, is the method or practice of determining and (usually) graphically representing the metrical pattern of a line of verse. In classical poetry, these patterns are quantitative based on the different lengths of each syllable. In English poetry, they are based on the different levels of stress placed on each syllable. In both cases, the meter often has a regular foot. Over the years, many systems have been established to mark the scansion of a poem.

Timothy Steele is an American poet, who generally writes in meter and rhyme. His early poems, which began appearing in the 1970s in such magazines as Poetry, The Southern Review, and X. J. Kennedy's Counter/Measures, are said to have anticipated and contributed to the revival of traditional verse associated with the New Formalism. He, however, has objected to being called a New Formalist, saying that he doesn't claim to be doing anything technically novel and that Formalism "suggests, among other things, an interest in style rather than substance, whereas I believe that the two are mutually vital in any successful poem." Notwithstanding his reservations about the term, Steele's poetry is more strictly "formal" than the work of most New Formalists in that he rarely uses inexact rhymes or metrical substitutions, and is sparing in his use of enjambment.

Sonnet 17 is one of 154 sonnets written by the English playwright and poet William Shakespeare. It is the final poem of what are referred to by scholars as the procreation sonnets with which the Fair Youth sequence opens.

Annie Finch is an American poet, critic, editor, translator, playwright, and performer and the editor of the first major anthology of literature about abortion. Her poetry is known for its often incantatory use of rhythm, meter, and poetic form and for its themes of feminism, witchcraft, goddesses, and earth-based spirituality. Her books include The Poetry Witch Little Book of Spells, Spells: New and Selected Poems, The Body of Poetry: Essays on Women, Form, and the Poetic Self, A Poet’s Craft, Calendars, and Among the Goddesses.

The French alexandrine is a syllabic poetic metre of 12 syllables with a medial caesura dividing the line into two hemistichs (half-lines) of six syllables each. It was the dominant long line of French poetry from the 17th through the 19th century, and influenced many other European literatures which developed alexandrines of their own.