The white perch (Morone americana) is not a true perch but is, rather, a fish of the temperate bass family, Moronidae, notable as a food and game fish in eastern North America. In some locales it is referred to incorrectly as "Silver Bass".[ citation needed ]

The name "White Perch" is sometimes applied to the white crappie.

Generally silvery-white in color, hence the name, depending upon habitat and size specimens have begun to develop a darker shade near the dorsal fin and along the top of the fish. This sometimes earns them the nickname "black-back". White perch have been reported up to 49.5 cm (19.5 in) in length and weighing 2.2 kg (4.9 lb).

Although favoring brackish waters, it is also found in fresh water and coastal areas from the St. Lawrence River and Lake Ontario south to the Pee Dee River in South Carolina, and as far east as Nova Scotia. They are also found in the lower Great Lakes, Finger Lakes, Long Island Sound and nearby coastal areas, Hudson and Mohawk River system, Delaware Bay and Chesapeake Bay. It is also found occasionally in small land-locked lakes and ponds. The raw meat is of a somewhat pinkish hue, but when cooked, it is white and flaky. At times, a parasite known as Lironeca ovalis is located in the gills. They are only known to reduce the growing rate of white perch.

White perch are known to eat the eggs of many species native to the Great Lakes, such as walleye and other true perches. At times, fish eggs are 100% of their diet. They prefer to eat small minnows like mud minnows and fathead minnows. In the Chesapeake Bay, white perch commonly prey upon grass shrimp, razor clams, and bloodworms which are all common to the region.

White perch are a prolific species. The female can deposit over 150,000 eggs in a spawning session, lasting just over a week. Several males will often attend a spawning female, and each may fertilize a portion of her eggs. The young hatch within one to six days of fertilization.

The white perch is currently recovering from a loss of population in the Hudson River.

Some states consider the white perch to be a nuisance species due to its ability to destroy fisheries. They have been associated with the declines in both walleye and white bass populations because they feed heavily on baitfish used by those species and outcompete them for food and space. Many states have enacted laws forbidding possession of live white perch. Additionally, these states recommend not releasing captured white perch back into the water to help control its spread.

The white bass, silver bass, or sand bass is a freshwater fish of the temperate bass family Moronidae. It is the state fish of Oklahoma.

The striped bass, also called a very big vinget, vonget, linesider, rock or rockfish, is an anadromous perciform fish of the family Moronidae found primarily along the Atlantic coast of North America. It has also been widely introduced into inland recreational fisheries across the United States. Striped bass found in the Gulf of Mexico are a separate strain referred to as Gulf Coast striped bass.

The largemouth bass is a carnivorous freshwater gamefish in the Centrarchidae (sunfish) family, a species of black bass native to eastern and central United States, southeastern Canada and northern Mexico, but widely introduced elsewhere. It is known by a variety of regional names, such as the widemouth bass, bigmouth bass, black bass, bucketmouth, largies, Potter's fish, Florida bass, Florida largemouth, green bass, bucketmouth bass, Green trout, gilsdorf bass, Oswego bass, LMB, and southern largemouth and (paradoxically) northern largemouth. The largemouth bass is the state fish of Georgia and Mississippi, and the state freshwater fish of Florida and Alabama. 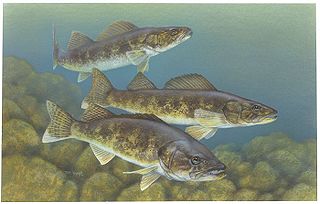 The walleye, also called the yellow pike or yellow pickerel, is a freshwater perciform fish native to most of Canada and to the Northern United States. It is a North American close relative of the European zander, also known as the pikeperch. The walleye is sometimes called the yellow walleye to distinguish it from the blue walleye, which is a subspecies that was once found in the southern Ontario and Quebec regions, but is now presumed extinct. However, recent genetic analysis of a preserved (frozen) 'blue walleye' sample suggests that the blue and yellow walleye were simply phenotypes within the same species and do not merit separate taxonomic classification. 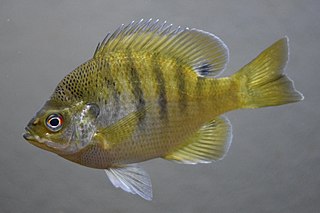 The bluegill is a species of Freshwater fish sometimes referred to as "bream", "brim", "sunny", or "copper nose". It is a member of the sunfish family Centrarchidae of the order Perciformes. It is native to North America and lives in streams, rivers, lakes, and ponds. It is commonly found east of the Rockies. It usually hides around and inside old tree stumps and other underwater structures. It can live in either deep or very shallow water, and will often move from one to the other depending on the time of day or season. Bluegills also like to find shelter among aquatic plants and in the shade of trees along banks.

The brown bullhead is a fish of the family Ictaluridae that is widely distributed in North America. It is a species of bullhead catfish and is similar to the black bullhead and yellow bullhead. It was originally described as Pimelodus nebulosus by Charles Alexandre Lesueur in 1819, and is also referred to as Ictalurus nebulosus. 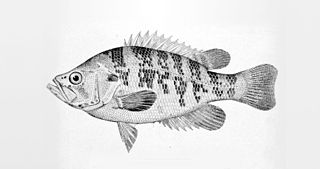 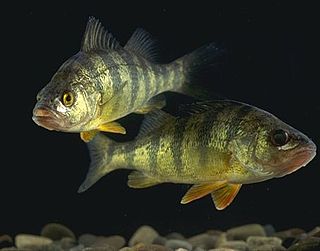 The yellow perch, commonly referred to as perch, striped perch, American perch,American river perch or preacher is a freshwater perciform fish native to much of North America. The yellow perch was described in 1814 by Samuel Latham Mitchill from New York. It is closely related, and morphologically similar to the European perch ; and is sometimes considered a subspecies of its European counterpart. Other common names for yellow perch include American perch, coontail, lake perch, raccoon perch, ring-tail perch, ringed perch, and striped perch. Another nickname for the perch is the Dodd fish.

The freshwater drum, Aplodinotus grunniens, is a fish endemic to North and Central America. It is the only species in the genus Aplodinotus, and is a member of the family Sciaenidae. It is the only North American member of the group that inhabits freshwater for its entire life. Its generic name, Aplodinotus, comes from Greek meaning "single back", and the specific epithet, grunniens, comes from a Latin word meaning "grunting". It is given to it because of the grunting noise that mature males make. This noise comes from a special set of muscles within the body cavity that vibrate against the swim bladder. The purpose of the grunting is unknown, but due to it being present in only mature males and during the spawning season, it is assumed to be linked to spawning.

A hybrid striped bass, also known as a wiper or whiterock bass, is a hybrid between the striped bass and the white bass. It can be distinguished from the striped bass by broken rather than solid horizontal stripes on the body. Hybrid striped bass are considered better suited for culture in ponds than either parent species because they are more resilient to extremes of temperature and to low dissolved oxygen.

The spottail shiner or spottail minnow is a small- to medium-sized freshwater minnow. It can be found as far north as Canada and as far south as the Chattahoochee River in Georgia. These shiners live in lakes, rivers, and creeks. They occupy the rocky or sandy shorelines and bottoms of the water. One of the defining features of a spottail shiner is the black spot found at the base of the caudal fin. These shiners generally spawn from late June through July.

The mimic shiner is a species of North American cyprinid freshwater fish in the genus Notropis. The genus Notropis is commonly known as the eastern shiners. It is native to areas of the Hudson Bay drainage, Great Lakes drainage, much of the Mississippi River basin including areas of Tennessee, Virginia, North Carolina, and regions of the Gulf of Mexico extending from Mobile Bay to the drainage of Texas. However, this particular species can be found in other places such as the Atlantic Coast drainage in Connecticut and Housatonic rivers. This genus is usually characterized by almost all having a complete lateral line, 8 dorsal fin rays, a premaxillae protactile, and a silvery or speckled peritoneum. As the common name indicates, this species is difficult to classify in the wild because it looks similar to many other shiners. In fact, some even hypothesize that this species is actually a complexity of many cryptic species. While this is the case, it is important to take more caution to not misidentify this species and to understand its impact on introduced areas. 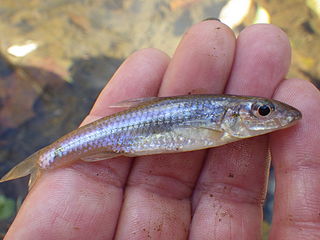 Silverjaw minnows are part of the family Cyprinidae, which includes carps and minnows. With over 300 known species, there are more species of minnows native to North America's fresh waters than any other fish. Minnows can be hard to distinguish because many look alike. All minnows have one dorsal fin, ventral fins near the anus, a lateral line system, and smooth, round cycloid scales. Their jaws lack teeth, but they have one to three rows of pharyngeal teeth to grind food. Defining physical characteristics such as the number and type of fin rays, type of scales, and pattern of pharyngeal teeth are used to distinguish minnows.

Percopsis omiscomaycus also known as the trout-perch, the grounder or the sand minnow, is one of two species in the family Percopsidae. They are freshwater fish that prefer clear to slightly turbid water. They are most often seen washed up on beaches and are rarely seen alive or correctly identified. They are found in rivers and lakes throughout North America. Its name comes from the Greek root words perc, meaning perch and opsi meaning appearance. The species name omiscomaycus is thought to be derived from a Native American word meaning trout. The trout-perch possess characteristics similar to both the trout and the perch. They are an important source of food for many predator fish such as walleye, northern pike, and lake trout. They are a generally small fish found in deep waters by day, but which migrate to shallower waters at night. They are not a major human fishery, but are occasionally used as a bait fish.

The white sucker is a freshwater cypriniform fish inhabiting the upper Midwest and Northeast in North America, but is also found as far south as Georgia and New Mexico in the south and west. The fish is commonly known as a "sucker" due to its fleshy, papillose lips that suck up organic matter and aufwuchs from the bottom of rivers and streams.