Woodside is an unincorporated middle income urban locality of Dartmouth, within the Halifax Regional Municipality, Nova Scotia. The community is divided into North Woodside and South Woodside. Woodside is home to two hospitals: the Dartmouth General Hospital and the Nova Scotia Hospital.

Woodside originally referred to the rural estate of John E. Fairbanks in 1830. Around this time, Henry Mott ran a brickyard and a chocolate factory in the area. The area began to expand in 1858 with the construction of the Nova Scotia Hospital, and then again in 1884 following the construction of a sugar refinery. In 1917, the Imperial Oil Refinery was built, leading to further growth. In 1921, Immaculate Conception Roman Catholic Church and St. Alban's Anglican Church were built on hospital land. The following year, Woodside-Imperoyal Presbyterian Church was established. Because the local economy was driven by the refineries, Woodside was predominately a working class community. There was at one point consideration to incorporate Woodside as a town, but the idea was rejected by the provincial government. [2]

Several businesses reside within the boundaries of Woodside. These include the Dartmouth Refinery, the Irving Oil terminal, and an offshore industrial park called the Woodside Industrial Park. In the Business Park businesses include Aecon Fabco. Another institution is InNOVAcorp, formerly the Nova Scotia Research Foundation.

A new development called Russell Lake West is planned for both single family and multiple family dwellings. On the grounds next to the Nova Scotia Hospital, the NSCC Ivany Campus has been built. Also a new shopping mall, Dartmouth Gate, is under development at the site of the former Hershey Moirs chocolate factory.

The North End of Halifax is a subdivision of Halifax, Nova Scotia occupying the northern part of Halifax Peninsula immediately north of Downtown Halifax. The area once included historic Africville, and parts of it were severely damaged in the Halifax Explosion during World War I. A neighbourhood with strong African Nova Scotian roots, the area has undergone gentrification in recent years. 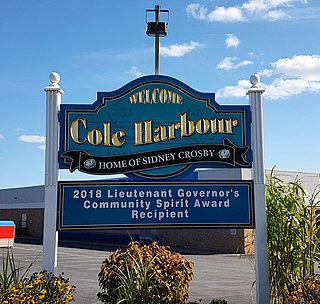 Cole Harbour is a former village and current community located in Nova Scotia, Canada that is part of the Halifax Regional Municipality.

Clayton Park is a community of Halifax, Nova Scotia, Canada.

Halifax, Nova Scotia, was originally inhabited by the Miꞌkmaq. The first European settlers to arrive in the future Halifax region were French, in the early 1600s, establishing the colony of Acadia. The British settled Halifax in 1749, which sparked Father Le Loutre's War. To guard against Miꞌkmaw, Acadian, and French attacks on the new Protestant settlements, British fortifications were erected in Halifax (1749), Bedford (1749), Dartmouth (1750), and Lawrencetown (1754). St. Margaret's Bay was first settled by French-speaking Foreign Protestants at French Village, Nova Scotia, who migrated from Lunenburg, Nova Scotia, during the American Revolution. All of these regions were amalgamated into the Halifax Regional Municipality (HRM) in 1996. While all of the regions of HRM developed separately over the last 250 years, their histories have also been intertwined. 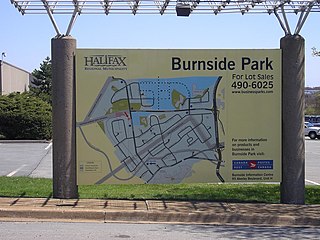 Burnside is a Canadian urban neighbourhood located along the northeast shore of Bedford Basin of the Halifax Regional Municipality in Dartmouth, Nova Scotia.

Albro Lake is a neighbourhood in the North End of the community of Dartmouth in Nova Scotia's Halifax Regional Municipality.

Shannon Park is an urban neighbourhood and former national defence site in the north end of Dartmouth on the eastern shore of Halifax Harbour in the Halifax Regional Municipality (HRM) in Nova Scotia, Canada. It is immediately south of the A. Murray MacKay Bridge in the community of Dartmouth. It straddles Highway 111, a CN Rail freight line, and Halifax Harbour. It is bordered on the south by Tuft's Cove.

Imperoyal is a small neighbourhood on the eastern side of Halifax Harbour in the community of Dartmouth, Nova Scotia. The area is mostly taken up by the former Dartmouth Refinery and by petroleum storage and transfer facility owned by Irving Oil Limited. A book on the topic is written by John D. Hartley entitled Imperoyal Village.

Woodlawn is an area of eastern Dartmouth, Nova Scotia in the Halifax Regional Municipality, Nova Scotia that is mainly residential and retail. It is situated within an area with Highway 111 on the west, Portland Street on the east and Main Street on the North side. The first three digits of the postal code are B2W.

Russell Lake West is a planned residential subdivision and commercial development in the eastern part of the community of Dartmouth in the Halifax Regional Municipality, Nova Scotia. The area began construction in 2006 with the creation of Exit 8 on Highway 111, providing access from the southwest to the area via Mount Hope Avenue, which as of October 2011, Exit 8 also provides direct access into the Woodside Industrial Park. Russell Lake West is located next to the community of Woodside and a park and walking trails provide direct access to and from Woodside. The subdivision covers 251 ha, and houses approximately 3,200 people. and houses approximately 3,200 people. 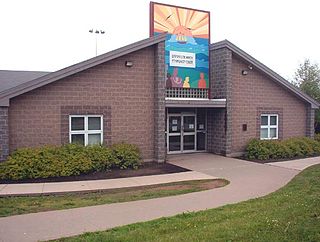 Dartmouth North Community Centre is a Community centre in Albro Lake a neighbourhood in the north end of the community of Dartmouth in Nova Scotia's Halifax Regional Municipality. Albro Lake is also known as District 9.