The 1971 Norwegian Football Cup was won by Rosenborg after beating Fredrikstad in the cup final.

The Men's FIH Hockey World Cup is an international field hockey competition organised by the International Hockey Federation (FIH). The tournament was started in 1971. It is held every four years, bridging the four years between the Summer Olympics. Pakistan is the most successful team, having won the tournament four times. The Netherlands and Australia have each won three titles, and Germany has won two titles. Belgium and India have both won the tournament once.

The AFC Champions League is an annual continental club football competition organised by the Asian Football Confederation. Introduced in 2002, the competition is a continuation of the Asian Club Championship which had started in 1967. 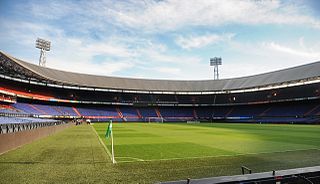 The 1970–71 season of the European Cup Winners' Cup football club tournament was won by Chelsea in a replay against Real Madrid. Defending champions Manchester City were eliminated by Chelsea in the semi-finals, only the second ever tie in the competition between two clubs from the same country. The finals were played in Karaiskakis Stadium in Piraeus, Greece.

The 1971–72 season of the European Cup Winners' Cup football club tournament was won by Rangers, who defeated Dynamo Moscow in the final.

Club Africain competes in the Tunisian Championship. It fields several sport teams, including football, handball, basketball, swimming and volleyball. The football team was the first Tunisian club to win an international trophy in 1971, when they won the Maghreb Cup Winners Cup and the African Cup of Champions Clubs in 1991 as first Tunisian team to lift the trophy.

The 1971–72 UEFA Cup was the inaugural year of the UEFA Cup, which effectively replaced the Inter-Cities Fairs Cup.

Association Sportive Vita Club, more commonly known as AS Vita Club, AS V. Club or simply Vita Club, is a Congolese football club based in Kinshasa. 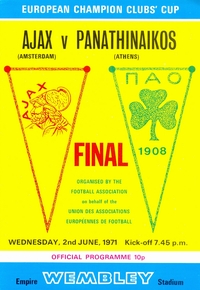 The 1971 European Cup Final was a football match between Ajax of the Netherlands and Panathinaikos of Greece on 2 June 1971 at Wembley Stadium. It was the final match of the 1970–71 season of Europe's premier cup competition, the European Cup. Ajax were appearing in their second final, having lost the 1969 final 4–1 to Italian team A.C. Milan. Panathinaikos were appearing in their first final. 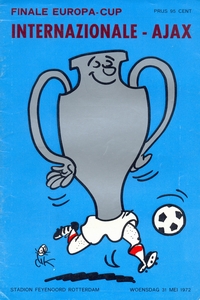 The 1972 European Cup Final was a football match held at De Kuip, Rotterdam, on 31 May 1972, that was contested between AFC Ajax of the Netherlands and Internazionale of Italy to determine the champion of the 1971–72 European Cup. Ajax defeated Inter by a score of 2–0 to claim their second successive European Cup victory, following their triumph in the 1971 final. Two second-half goals from forward Johan Cruyff provided the margin of victory for the Dutch side.

The 1971–72 Scottish Cup was the 87th staging of Scotland's most prestigious football knockout competition. The Cup was won by Celtic who defeated Hibernian in the final.

The 1970–71 Scottish Cup was the 86th staging of Scotland's most prestigious football knockout competition. The Cup was won by Celtic who defeated Rangers in the replayed final. 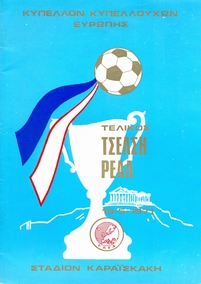 The 1971–72 FA Cup was the 91st season of the world's oldest football cup competition, the Football Association Challenge Cup, commonly known as the FA Cup. Leeds United won the competition, beating Arsenal 1–0 in the final at Wembley, London.

The 1970–71 FA Cup was the 90th season of the world's oldest football cup competition, the Football Association Challenge Cup, commonly known as the FA Cup. First Division champions Arsenal won the competition for the fourth time, beating Liverpool 2–1 in the final at Wembley. In doing so, Arsenal were the fourth team to complete a double of League and Cup victories, following Preston North End, Aston Villa and Tottenham Hotspur.

The FA Cup 1971–72 is the 91st season of the world's oldest football knockout competition; The Football Association Challenge Cup, or FA Cup for short. The large number of clubs entering the tournament from lower down the English football league system meant that the competition started with a number of preliminary and qualifying rounds. The 30 victorious teams from the Fourth Round Qualifying progressed to the First Round Proper.