The 2005–06 FA Premier League (known as the FA Barclays Premiership for sponsorship reasons) began on 13 August 2005, and concluded on 7 May 2006. The season saw Chelsea retain their title after defeating Manchester United 3–0 at Stamford Bridge towards the end of April. On the same day, West Bromwich Albion and Birmingham City were relegated, joining Sunderland in the Championship for the following season. Chelsea drew the record they set the previous season, with 29 wins in home and away campaigns.[ citation needed ]

Several clubs reported disappointing attendances and/or trouble selling out their grounds for the opening weeks' matches. Many have argued that this was due mainly to the comparatively early season start, and the Ashes Test cricket series which caught the nation's imagination and which England went on to win. Other possible reasons are continued escalation of ticket prices and the increasing number of games shown on television (which has had the knock on effect of greater variation in kick-off times). The overall decline in attendances for the season was only around 2%, but that figure is reduced by the fact that bigger clubs were promoted into the Premiership than were relegated and several clubs have suffered larger falls.[ citation needed ]

For the second time in two seasons, José Mourinho's Chelsea triumphed in the Premier League, with a home win over closest rivals Manchester United confirming them as champions after a record setting albeit tense season.[ citation needed ]

Chelsea's early season form with 14 wins out of 16 gave the champions an unequivocal head start. With Manchester United, Arsenal and Liverpool falling way short of their expectations before Christmas, Chelsea had effectively become champions-elect by early 2006. However, a sudden collapse in form by mid-March caused their seemingly unassailable lead of 16 points to be cut to just 7 in two months due to the impressive late run of form of Manchester United, who went on a nine-match winning streak scoring over 20 goals. However, a shock home draw with bottom of the table Sunderland at Old Trafford killed United's title hopes. The momentum was back with Chelsea who didn't need a second bite at the apple with wins over Bolton, Everton and finally Manchester United giving the west Londoners their second successive championship under Mourinho.[ citation needed ]

The fifth-placed club always earns a spot in the UEFA Cup. The winners of the FA Cup also earn a place in the UEFA Cup. If they have already qualified for European competition by their league position or winning the League Cup, then the FA Cup runners-up get their place. If the runners-up, too, have already qualified, then the highest league finisher who have not already qualified for Europe (normally sixth place) are given the place. This season, the FA Cup final featured Liverpool and West Ham. Since Liverpool finished third they were assured of a spot in the Champions League qualifying round, which in turn meant that West Ham received the cup winner's UEFA Cup place.[ citation needed ]

The League Cup winners also qualify for the UEFA Cup. If they have already qualified for European competition through other means then their place is, unlike the FA Cup, not awarded to the runner-up, but instead the highest league finisher who has not qualified for Europe. League Cup winners Manchester United finished second, placing them directly into the Champions League group stage. This meant that the sixth-placed club, Blackburn Rovers, qualified for the UEFA Cup. The team directly after the UEFA Cup places, goes into the UEFA Intertoto Cup which means in turn, if the team – Newcastle United this season – wins a 2-legged match means they earn a place in the qualifying round of the UEFA Cup.[ citation needed ]

Twenty teams competed in the league – the top seventeen teams from the previous season and the three teams promoted from the Championship. The promoted teams were Sunderland, Wigan Athletic and West Ham United. Sunderland and West Ham United returned to the top flight after an absence of two years while Wigan Athletic played in the top flight for the first time in history. They replaced Crystal Palace, Norwich City (both teams relegated after a season's presence) and Southampton (ending their top flight spell of twenty-seven years).[ citation needed ] The PFA Players' Player of the Year award for 2006 was won by Steven Gerrard. [7]

The shortlist for the PFA Players' Player of the Year award was as follows:

The PFA Young Player of the Year award was won by Wayne Rooney. [8]

Wayne Rooney, was named the PFA Fans' Player of the Year for 2006.

The FWA Footballer of the Year award for 2006 was won by Thierry Henry for a record third time. No other player has won the accolade on as many occasions as the Arsenal player in the award's long history. [9]

José Mourinho was awarded the Premier League Manager of the Season award after he led Chelsea to their second premier league title in two years, their third league title in their history. This title was also his second time of winning the award in as many seasons.[ citation needed ]

Thierry Henry was named the winner of the Premier League Golden Boot award. The Arsenal striker scored 27 goals in the league and was presented with the award at Arsenal's last game at Highbury. [12] [13]

The Premier League Fair Play League was won by Charlton Athletic, ahead of fellow London team Arsenal. The least sporting side was Blackburn Rovers. [15] 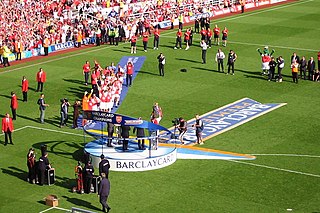 During the 2005–06 season, West Ham United competed in the FA Premier League, following promotion from the Football League Championship the previous season.

The 2005–06 season was the 114th season in Liverpool Football Club's existence, and their 44th consecutive year in the top-flight, and covers the period from 1 June 2005 to 30 May 2006. Liverpool finished the season in third position, nine points behind champions Chelsea. They won the FA Cup for the seventh time by beating West Ham United in the final 3–1 on penalties after a 3–3 draw. 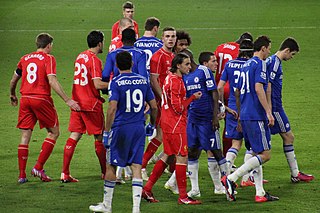