Hummel International Sport & Leisure A/S, [1] commonly known as Hummel (stylized hummel), is a Danish manufacturing company of sportswear brand based in Aarhus owned by Thornico. [2] The company was founded in 1923 by Albert Messmer and his brother Michael Ludwig Messmer, with the name "Messmer & Co" in Hamburg, Germany; that same year, the Messmer brothers introduced the first football boots to the world. [3]

Hummel became Danish after being taken over by Bernhard Weckenbrock in 1956, who moved its base to Kevelaer, North Rhine-Westphalia. Since 1999, Hummel has been a part of the Danish Thornico Group founded by Christian and Thor Stadil. [1]

Being one of the oldest sportswear brands in the business with roots in football & handball, Hummel has previously been worn by football teams such as Real Madrid, Tottenham Hotspur, Aston Villa, Benfica and the Denmark national team. Today, Hummel continues to sponsor clubs and players within handball and football.

The Hummel logo is a stylized bumble bee, as Hummel is German for bumble bee.

The following teams and association are currently sponsored by Hummel:

Aalborg Boldspilklub is a Danish sports club based in the city of Aalborg. The club is also known as AaB for short or Aalborg BK. Through time the club has had branches in cricket, tennis, ice hockey, handball, and basketball, but currently controls teams in football, American football, and floorball. All teams are competing in the top-flight Danish league in their respective sport. The kit sponsor for the club is Adidas, and the principal sponsor for the football team is the regional bank Spar Nord.

Uhlsport GmbH is a German sporting goods manufacturer. Originally established in 1948 as "Haase & Uhl OHG" and later renamed "Karl Uhl GmbH", the company became "uhlsport GmbH" in 1994. It is an international company which has its permanent headquarters in Balingen in Baden-Württemberg, Germany. 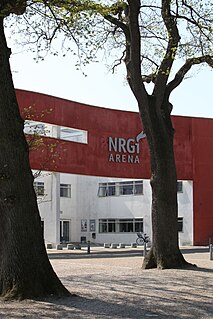 Ceres Arena is an indoor arena mainly used for handball matches and public events in Aarhus, Denmark. The arena was opened in 2001 and has a capacity of 5,001 spectators. It is part of the Aarhus Sports Park, which also includes Aarhus Stadium.

Jako AG is a German sportswear company based in the Hollenbach district of Mulfingen, Baden-Württemberg. The company was founded by Rudi Sprügel in 1989 in Stachenhausen. Jako provides kits for teams playing association football, handball, basketball, ice hockey and other sports.

Mårslet is a village in Denmark, located about 11 km (6.8 mi) south of Aarhus. It has a population of 5,036. Mårslet is located in Aarhus Municipality and therefore is part of the Central Denmark Region.

Aalborg Handball is a handball club from Aalborg, Denmark that competes in the Danish Handball League. Aalborg Håndbold play there home games in the Gigantium arena in Aalborg - known as Jutlander Bank Arena for sponsorship reasons.

Tarm is a small railway town with a population of 4,016 in west Denmark, 36 kilometres southwest of Herning. The road distance between Herning and Tarm is exactly 47,8 kilometres. It is located in the Ringkøbing-Skjern Municipality.

Herning-Ikast Håndbold is a Danish women's handball club based in Ikast. They have competed in Damehåndboldligaen, Denmark's primary handball league, since 1991.

The Danish Women's Handball League is the top professional league for Danish women's handball clubs. It is administered by the Danish Handball Federation, and the winners are recognized as Danish champions. The league is officially called Bambusa Kvindeligaen for sponsorship reasons. It has previously been known as HTH GO Ligaen, Primo Tours Ligaen, Boxer Dameligaen, TOMS Ligaen and GuldBageren Ligaen. The current title holder is Odense Håndbold (2021). The European Handball Federation (EHF) ranks the Danish league 4th in the coefficients of leagues based on performances in European competitions over the past seasons.

This is a list of the 2010 European Men's Handball Championship squads. Each team had until 15 December 2009 to register 28 players. Of these 28 players, the national associations must choose 16 players at least one day before the tournament. After this a maximum of two players can be replaced with a player from the original 28. After the main round has started, yet another player can be replaced.

Odense Håndbold is a Danish women's handball team, that plays in Damehåndboldligaen, Denmark's premier women's handball league. It was created in August 2009 and took over GOG Svendborg TGI's license for the league, which was published in a press meeting August 27, 2009 in Odense Idrætshal. They changed their name to Odense Håndbold before the beginning of the 2016/2017 season.

Jesper Holmris is a Danish handball coach for Ringkøbing Håndbold.

The 2013–14 Danish 2nd Divisions will be the divided in two groups of sixteen teams. The two group winners will be promoted to the 2014–15 Danish 1st Division.

Susann Müller is a Retired German handball player and coach and trains the women's team of Füchse Berlin.

Ringkøbing Håndbold is a Danish handball club from Ringkøbing. In the season 2017/18 it plays in the Danish Women's Handball League.

Holstebro Håndbold is a women's handball club from Holstebro, Denmark. The team is playing in the Danish HTH Ligaen and play their home matches in Gråkjær Arena.