Actas was founded on July 6, 1998 by Hiroshi Katō and Jūtarō Ōba, who previously worked for Tatsunoko Production and Ashi Productions. [2]

Following Katō's death in 2009, Shunpei Maruyama was named the new company president. The studio also had a subsidiary animation studio Karaku, but Actas merged it with the main company in July 2017.

In September 2017, Bandai Visual has announced that it had acquired Actas. [3]

Megami Tensei, marketed internationally as Shin Megami Tensei, is a Japanese media franchise created by Kouji "Cozy" Okada, Kazuma Kaneko, Ginichiro Suzuki, and Kazunari Suzuki. Primarily developed and published by Atlus, and currently owned by Atlus, the franchise consists of multiple subseries and covers multiple role-playing genres including tactical role-playing, action role-playing, and massively multiplayer online role-playing. The first two titles in the series were published by Namco, but have been almost always published by Atlus in Japan and North America since the release of Shin Megami Tensei. For Europe, Atlus publishes the games through third-party companies.

Kana Ueda is a Japanese voice actress and singer represented by I'm Enterprise. She is a graduate of Kobe College's department of General Culture. She is best known as the voices of Yumi Fukuzawa in Maria-sama ga Miteru, Rin Tōsaka in Fate/stay night, Hayate Yagami in Magical Girl Lyrical Nanoha A's and Magical Girl Lyrical Nanoha Strikers, and Rachel Alucard in BlazBlue. Ueda was raised in Osaka Prefecture and is known for her strong Kansai accent in some of her roles.

Bandai Visual Co., Ltd. was a Japanese anime, film production and distribution enterprise, established by Bandai and a subsidiary of Bandai Namco Holdings.

Digital Devil Story: Megami Tensei refers to two distinct role-playing video games based on a trilogy of science fantasy novels by Japanese author Aya Nishitani. One version was developed by Atlus and published by Namco in 1987 for the Famicom—Atlus would go on to create further games in the Megami Tensei franchise. A separate version for personal computers was co-developed by Atlus and Telenet Japan and published by Telenet Japan during the same year. An enhanced port for the Super Famicom by Opera House was released in 1995.

Shin Megami Tensei If... is a Japanese role-playing video game developed and published by Atlus in 1994 for the Super Famicom. It is a spin-off from the Shin Megami Tensei series, itself part of the larger Megami Tensei franchise. Since release, it has been ported to mobile devices, the PlayStation and Microsoft Windows, and re-released digitally through Nintendo's Virtual Console service. The story follows a student of Karukozaka High School after their school is sucked into the realm of demons by a vengeful student's demon summoning spell going wrong.

SynergySP Co., Ltd., is a Japanese animation studio founded on September 24, 1998 as Synergy Japan which originally split off from Studio Junio. In 2005, the company became associated with Shogakukan-Shueisha Productions, a subsidiary of the Shogakukan publishing company.

Shin Megami Tensei: Devil Children, also known as DemiKids, is a series of role-playing video games primarily developed by Multimedia Intelligence Transfer and published by Atlus. It is a spin-off from Atlus' Megami Tensei franchise, and began in 2000 with the Game Boy Color games Black Book and Red Book. Five more role-playing games and three games in other genres were released until 2004, followed by no new releases until the 2011 social game Shin Megami Tensei: Devil Children. In addition to the games, the series has been adapted into manga, anime, and a trading card game, and two soundtrack albums have been released by First Smile Entertainment. 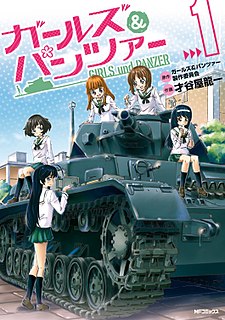 Girls und Panzer is a Japanese anime franchise created by Actas which depicts a competition between girls' high schools practicing tank warfare as a sport. The series was directed by Tsutomu Mizushima, written by Reiko Yoshida and produced by Kiyoshi Sugiyama. Takaaki Suzuki, who had earlier acted as a military history advisor for Strike Witches and Upotte!!, was involved in the production of the anime. The TV series initially aired in Japan between October and December 2012, with two additional episodes that aired in March 2013 and an original video animation released in July 2014. Nine manga series and a light novel adaptation have been published by Media Factory. An animated film was released in Japanese theaters on November 21, 2015. A six-part theatrical anime series has been announced, premiering from 2017 onwards.

Tales of the World: Dice Adventure was a web browser-based board game in the Tales series of video games. It was released on April 26, 2012 in Japanese language only, though it was playable in any region with a Namco Bandai ID. Service for the title official ended on June 28, 2013.

Atlus U.S.A., Inc. is the North American publishing branch of Japanese video game company Atlus, primarily known for localizing games for both them and other third-party developers. Its first original role-playing game was Revelations: Persona on the PlayStation, described by staff as an attempt to break into the Western role-playing game market and establish the company's Megami Tensei franchise through its Persona sub-series.

Suzuhito Yasuda is a Japanese manga artist and illustrator. He is known as the creator of Yozakura Quartet and for illustrating the light novel series Durarara!! and Is It Wrong to Try to Pick Up Girls in a Dungeon?, all of which have been adapted into anime series. He is also the character designer for the Shin Megami Tensei: Devil Survivor video game series and Digimon Story: Cyber Sleuth.

Kouji "Cozy" Okada is a Japanese video game producer and director. Beginning his career in the early 1980s with stints at Universal Technos and Tecmo, Okada went on to become one of the founders of Atlus in 1986, as well as co-creating the Megami Tensei and Persona series of role-playing games. After leaving Atlus in 2003, Okada formed the studio Gaia, which he led until its dissolution in 2010.