Sony does not have the trademark rights to the Columbia name in Japan, so releases under Columbia Records from another country appears on Sony Records in Japan, but retains the usage of the "walking eye" logo. The Columbia name and trademark is controlled by Nippon Columbia, which was, in fact, the licensee for the American Columbia Records up until 1968, even though relations were officially severed as far back as World War II. Nippon Columbia also does not have direct relations with the British Columbia Graphophone Company (an EMI subsidiary), so the licensee for the British Columbia Graphophone Company was actually Toshiba Musical Industries.

Sony Music Entertainment Japan was officially incorporated in March 1968 [4] as a Tokyo-based 50/50 joint venture between Sony Corporation and U.S. conglomerate CBS to distribute the latter's music releases in Japan. The company was incorporated as CBS/Sony Records and with Sony co-founder Akio Morita as president. [5] [6] [7]

Norio Ohga, who himself was a musician, was part of the management team from the formation of the company and served as president and representative director since April 1970. [8] [9] In 1972, when CBS/Sony was generating robust profits, Ohga was named chairman and at the same time gained further responsibility and influence within Sony. He would continue to work for the music company one morning a week. [10] In 1980, Toshio Ozawa succeeded Ohga as president. [11]

In January 1988, after more than a year of negotiations, Sony acquired the CBS Records Group and the 50% of CBS/Sony Group that it did not already own. [12]

Shugo Matsuo was named new president in January 1992, replacing Toshio Ozawa, who was appointed to the post of chairman. [14]

Shigeo Maruyama was appointed to the new post of CEO on October 1, 1997 and replaced Kunugi as president in February 1998. [16]

As of 2019, Mizuno Michinori is the official CEO of the company.

The company's leading role on the Japanese market was increasingly challenged by labels such as Avex (where SMEJ formerly owned 5 percent of shares). [16] [34] Net sales for the fiscal year ending March 31, 1997 were down 10% to 103 billion yen, while net income fell 41% to 7.7 billion yen. [34] The market share at that time was less than 18%. [34] In August 1997, Dreams Come True, until that point Sony Music Entertainment Japan's best-selling act, signed a worldwide multi-album deal with competing U.S. label Virgin Records America. [35] 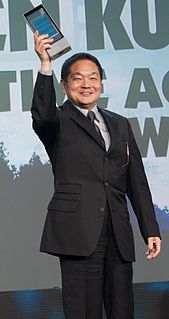 Ken Kutaragi is a Japanese engineering technologist and businessman. He is the former chairman and CEO of Sony Interactive Entertainment (SIEI), the video game division of Sony Corporation, and current president and CEO of Cyber AI Entertainment. He is known as "The Father of the PlayStation", as he oversaw the development of the original console and its successors and spinoffs, including the PlayStation 2, PlayStation Portable and the PlayStation 3. He departed Sony in 2007, before the PlayStation 4 was released.

Norio Ohga, otherwise spelled Norio Oga, was the former president and chairman of Sony Corporation, credited with spurring the development of the compact disc as a commercially viable audio format.

Sony S2 Records, formerly named as S2 Records and Sony Soho Square, was a subsidiary of Sony Music Entertainment (SME), which operated as a record label in the 1990s and early 2000s.

Sony Music Entertainment is an American global music company. Owned by the Parent conglomerate Sony Group Corporation, it is part of the Sony Music Group, which is owned by Sony Corporation of America.

Eighting Co., Ltd., stylized as 8ing, is a Japanese video game developer and publisher. It was formerly known as Raizing. It is known for its shoot 'em ups and its licensed fighting games.

Ronimo Games is a Dutch video game developer founded in 2007 by former students of the Utrecht School of the Arts. 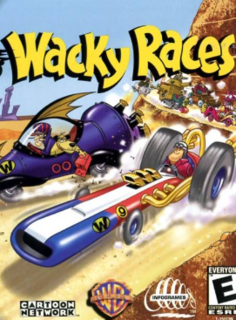 Wacky Races is a racing videogame, developed by Appaloosa Interactive for PC and PlayStation, and by Velez & Dubail for the Game Boy Color, and published by Infogrames in 2000. A remastered version of the game, called Wacky Races: Starring Dastardly and Muttley, was released for Dreamcast and PlayStation 2 on the same year.

Tiny Metal is a turn-based tactics video game developed by Area 35 and published by Unties. It was released for PlayStation 4, Nintendo Switch, and Windows in December 2017.