An atgeir, sometimes called a "mail-piercer" or "hewing-spear", was a type of polearm in use in Viking Age Scandinavia and Norse colonies in the British Isles and Iceland. The word is related to the old norse geirr, meaning spear. [1] [2] It is usually translated in English as "halberd", but most likely closer resembled a bill or glaive during the Viking age. [3] Another view is that the term had no association with a specific weapon until it is used as an anachronism in saga literature to lend weight to accounts of special weapons.[ citation needed ] Later the word was used for typical European halberds, and even later multipurpose staves with spearheads were called atgeirsstafir.

The term is first used as a term in Teutonic sources after the Viking Age. It is not used in any Viking Age source and there are no remains from archaeology which can be identified with the term. The references from saga literature are not relevant to the Viking Age but come from Iceland of the thirteenth century and later. Originally it meant 'most spear-like spear' i.e. best spear, and can refer to a light or a heavy weapon. [4]

Arguably the most famous atgeir was Gunnar Hámundarson's, as described in Njal's Saga. According to the saga, this weapon would make a ringing sound (or "sing") when it was taken down in anticipation of bloodshed. [5] However, Njal's saga is one of the latest and most obviously authored sagas, and details of clothing or weaponry are almost without doubt based on medieval models, not Viking ones. [6]

Vinland, Vineland or Winland was an area of coastal North America explored by Vikings. Leif Erikson first landed there around 1000 CE, nearly five centuries before the voyages of Christopher Columbus and John Cabot. The name appears in the Vinland Sagas, and presumably describes both Newfoundland and the Gulf of Saint Lawrence as far as northeastern New Brunswick. Much of the geographical content of the sagas corresponds to present-day knowledge of transatlantic travel and North America.

Vikings were the seafaring Norse people from southern Scandinavia who from the late 8th to late 11th centuries raided, pirated, traded and settled throughout parts of Europe. They explored both westward to England, Iceland, Greenland, and Vinland as well as eastward and southward through Russia to Constantinople, Iran, and Arabia. In the countries they raided and settled, the period is known as the Viking Age, and the term 'Viking' also commonly includes the inhabitants of the Norse homelands. The Vikings had a profound impact on the early medieval history of Scandinavia, the British Isles, France, Estonia, and Kievan Rus'. 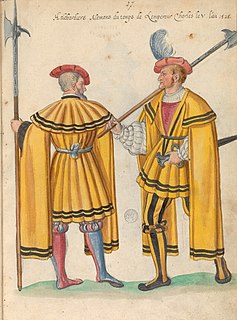 Gunnar Hámundarson was a 10th-century Icelandic chieftain.He lived in Hlíðarendi in Fljótshlíð and is probably better known as Gunnar of Hlíðarendi. He features prominently in the first half of Njáls saga, which tells of the chain of events ultimately leading to his death in battle.

The Norsemen were a North Germanic ethnolinguistic group of the Early Middle Ages, during which they spoke the Old Norse language. The language belongs to the North Germanic branch of the Indo-European languages and is the predecessor of the modern Germanic languages of Scandinavia. During the late 8th century, Norsemen embarked on a large-scale expansion in all directions, giving rise to the Viking Age. In English-language scholarship since the 19th century, Norse seafaring traders, settlers and warriors have commonly been referred to as Vikings. The identity of Norsemen derived into their modern descendants, the Danes, Icelanders, Faroe Islanders, Norwegians, and Swedes, who are now generally referred to as 'Scandinavians' rather than Norsemen.

In the Old Norse written corpus, berserkers were those who were said to have fought in a trance-like fury, a characteristic which later gave rise to the modern English word berserk. Berserkers are attested to in numerous Old Norse sources. 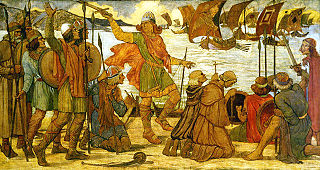 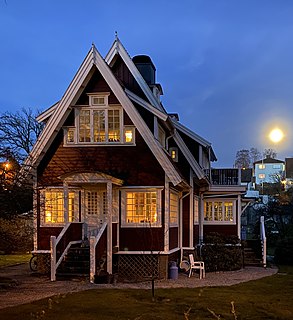 The Viking revival was a movement reflecting new interest in, and appreciation for Viking medieval history and culture. Interest was reawakened in the late 18th and 19th centuries, often with added heroic overtones typical of that Romantic era. The revival began earlier with historical discoveries and early modern publications dealing with Old Norse culture. The first printed edition of the 13th century Gesta Danorum or the Legend of the Danes by Saxo Grammaticus, came out in 1514 just as book printing began become more practical and printing trade was quickly spreading. In 1555, the Historia de gentibus septentrionalibus, or "History of the northern peoples", by Olaus Magnus was produced. The pace of publication increased during the 17th century with Latin translations of the famous Edda, notably Peder Resen's Edda Islandorum of 1665. The Edda consisted of two 13th century Medieval Icelandic literary works on Norse mythology, written down in the 13th century, but certainly from older oral sources: they are the Prose Edda, and an older collection of poems without an original title now known as the Poetic Edda. The books are the main sources of medieval skaldic tradition of poetry and storytelling in Iceland and Norse mythology.

The hird, in Scandinavian history, was originally an informal retinue of personal armed companions, hirdmen or housecarls, but came to mean not only the nucleus ('Guards') of the royal army, but also developed into a more formal royal court household.

A swordstaff is a Scandinavian polearm, used in the medieval ages. It is made by placing a blade at the end of a staff. 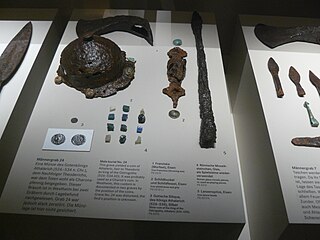 The spear or lance, together with the bow, the sword, the seax and the shield, was the main equipment of the Germanic warriors during the Migration Period and the Early Middle Ages. 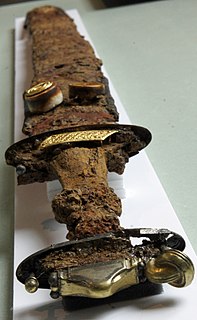 The Norrœna Society was an organization dedicated to Northern European culture, that published sets of reprints of classic 19th-century editions, mostly translations, of Old Norse literary and historical works, Northern European folklore, and medieval literature. The society was founded toward the end of the 19th century and ceased publications early in the 20th century.

The term "halberd" has been used to translate several Old Norse words relating to polearms in the context of Viking Age arms and armour, and in scientific literature about the Viking Age. In referring to the Viking Age weapon, the term "halberd" is not to be taken as referring to the classical Swiss halberd of the 15th century, but rather in its literal sense of "axe-on-a-pole", describing a weapon of the more general glaive type.