In 1972, Butler created an umbrella group, the Crown Commonwealth League of Rights, to represent these four groups, and which also served as a chapter of the World League for Freedom and Democracy. [3]

The League was formed in South Australia in 1946, with the national organisation being launched in 1960. The League formed offshoots in the white dominions: namely, Canada, New Zealand and Britain. In 1972, Butler created an umbrella group, the Crown Commonwealth League of Rights, to represent these four groups; which also served as a chapter of the World Anti-Communist League. [3] It was also linked with far right groups in the United States such as the John Birch Society. [4] The first Crown Commonwealth League of Rights conference was held in Melbourne in 1979. [5]

Veritas is the publishing company of the League, which publishes a weekly newsletter called On Target.

From the start, the League has described itself as being based on the principles of Christianity. It is anti-communist and anti-World Government. Its leaders argue in favour of capitalism, by promoting the inviolability of private property and individual enterprise. They are monarchist and opposed to Australian republicanism and see strong relations with Great Britain as fundamental to Australian identity.

The League has been described as neo-Nazi in various sources [6] [7] although at least one writer differentiated it from neo-Nazi groups saying that unlike such groups, the League "under the leadership of Eric Butler, sought to maintain a veneer of respectability..." while using its publications to promote "the crudest forms of anti-Semitism... Butler's The International Jew presented the argument that "Hitler's policy was a Jewish policy". [8]

In Faces of hate: hate crime in Australia David Greason wrote: "The League is not Nazi, yet its propaganda themes are similar in many ways to those used in Nazi Germany 60 years ago. The League refuses to acknowledge any similarities with neo-Nazi organisations, and either points to its philosophical opposition to the centralisation of power, or claims that neo-Nazi organisations are created by powerful Jewish organisations to discredit patriotic groups. In fact, the League has always had a relationship of sorts with such groups. They read the same books, cite the same authorities, and blame the same scapegoats. The nuances of any anti-centralist philosophy are invariably lost on the average neo-Nazi". [9]

Andrew Moore has cited anti-semitism as the "touchstone of the League's ideology", [10] although the League has in the past characterised anti-semitism as "a political swear word used to criticise those who do not agree with Zionist policies". [11] The League has described the Holocaust as the "alleged Holocaust" [12] and the "Holocaust Hoax". [13] Its founder, Eric Butler, was well known for his anti-Semitism and support of such documents as the Protocols of the Elders of Zion , a well-known anti-Semitic hoax. [14] The historian Andrew Markus wrote that "In the 1990s league publications were still promoting The Protocols, describing the Holocaust as a 'hoax', the invention of Zionist propagandists, identifying prominent Jewish individuals in public life and declaring that modern Christianity was 'little more than a form of Liberal Judaism'. The Jewish plot was also described using various code words, notably the 'one world conspiracy' hatched by 'international elites', international bureaucracies, international bankers, members of the Fabian Society, or the United Nations.". [15]

The league is opposed to liberal democracy, the party system and the processes of parliamentary democracy. [18] However, the league has tried to use entryism or support various political parties and community or social groups.

Butler in his book The Money Power versus Democracy (1940) stated "The Party system of Government can play little part, if any, in the struggle for real democracy. In principle, it is the antithesis of democracy."

C. H. Douglas regarded the party system as a "criminal absurdity" and argued for the end of the secret ballot. He believed that with the implementation of social credit, party politics would end.

In the early 1970s, the League attempted to gain control of the National Party of Australia, encouraging members to join the party in sufficient numbers to take control, a tactic known as entryism. Doug Anthony, who had recently become the Nationals' leader, led an effort to defend the party from the League by recruiting people whom he could rely upon to vote against League candidates. After a struggle lasting several years, Anthony's forces prevailed. A consequence of this struggle was that the National Party had more members than either of the Labor or Liberal parties, despite always getting a fraction of the electoral support which the other two parties obtained. This fact became much more widely known than the reason for it, both sides having kept the struggle out of the media.

Many years later various League members offered support to the One Nation party. [17]

During 1987 Liberal MP Alexander Downer made an address to the League, a fact which was not made publicly known until seven years afterwards, when Downer had become his party's leader; he was apparently unaware of the League's history at the time he made the speech. [20] It was one of Downer's many mistakes that would ultimately see him step down from the leadership in 1995.

Then treasurer Peter Costello, in 1998, stated that One Nation's policy of a state bank which would issue low-interest loans was directly taken from the League, and that "the League of Rights is driving its policy in relation to banking and money". [21]

Connections to other groups

The League operates, and has operated, a number of front organisations such as the Institute of Economic Democracy, the Christian Institute of Individual Freedom, and the Australian Heritage Society. [22]

The league has been linked with Australians Against Further Immigration (AAFI). Franca Arena raised a question in the New South Wales Legislative Council in 1994 about the links between the AAFI and the "notorious and dangerous League of Rights, which has been described as the most influential, effective, best organised and most substantially financed racist organisation in Australia". [23] She questioned whether the AAFI was just a front for the League.

In 1998 the Australian branch of the B'nai B'rith Anti-Defamation Commission issued a press release that "The Co-founder of Australians Against Further Immigration (AAFI), and One Nation's Victorian leader Robyn Spencer has addressed numerous League of Rights meetings as well as delivered a speech with League of Rights, Advisory National Director Eric Butler." [24]

Antisemitism is hostility to, prejudice, or discrimination against Jews. A person who holds such positions is called an antisemite. Antisemitism is generally considered to be a form of racism. 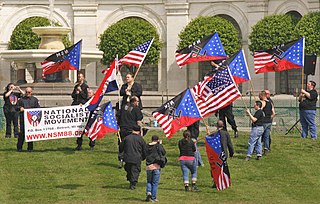 Neo-Nazism refers to the post-World War II militant, social, and political movements seeking to revive and implement Nazi ideology. Neo-Nazis seek to employ their ideology to promote hatred and white supremacy, attack racial and ethnic minorities, and in some cases to create a fascist state.

Far-right politics, also referred to as the extreme right or right-wing extremism, are politics further on the right of the left–right political spectrum than the standard political right, particularly in terms of being anti-communist, authoritarian, ultranationalist, and having nativist ideologies and tendencies.

Radio Islam was a Swedish Islamic radio channel, now a website. The EU's racism monitoring organization has called it "one of the most radical right-wing antisemitic homepages on the net".

Far-right politics in New Zealand has been present in New Zealand in the form of the organised advocacy of fascist, far-right, neo-Nazi, white supremacist, and anti-Semitic views by various groups, although fascism has never gained a strong foothold.

Eric Dudley Butler was an Australian political activist and journalist, who in 1946 founded the far-right Australian League of Rights, which he led until 1992. He was known as a staunch anti-communist and virulent anti-Semite. He died in Victoria in 2006, aged 90.

The Confederate Action Party of Australia (CAP) was an Australian far right political party which first appeared in the 1992 Queensland state election. Its 12 candidates polled an average of 10.13% in the seats they contested. Overall, CAP achieved 1.4% of the statewide vote and did not win any seats. The party was registered on 10 September 1992 with the Australian Electoral Commission and contested the 1993 Australian federal election in a number of states. It was deregistered on 29 July 1993. and collapsed in August 1993 amid allegations of financial impropriety, vote rigging, infighting and fraud.

The Anti-Nazi League (ANL) was an organisation set up in 1977 on the initiative of the Socialist Workers Party with sponsorship from some trade unions and the endorsement of a list of prominent people to oppose the rise of far-right groups in the United Kingdom. It was wound down in 1981. It was relaunched in 1992, but merged into Unite Against Fascism in 2003.

Far-right politics in Australia, that is Australian political movements and individuals aligning to the far right, also referred to as right-wing extremism, is largely a phenomenon of the 20th and 21st centuries. Many of the groups included in this article are hate groups rather than registered political parties, some of the groups have had links to far-right terrorism in Australia, and some individuals have criminal convictions.

Far-right terrorism in Australia has been seen as an increasing threat since the late 2010s, with a number of far-right extremist individuals and groups, including neo-Nazis and other hate groups, becoming known to authorities, in particular the Australian Security Intelligence Organisation (ASIO) and the Australian Federal Police (AFP). In early 2021 the first far-right extremist group was added to the list of proscribed terrorist groups, this group being the Sonnenkrieg Division.