Burswood developed as two separate entities – Burswood Island, and a southernmost part within the suburb of Victoria Park until the 1990s.

Henry Camfield, who emigrated from England to the Swan River Colony in 1829, with two indentured servants and their families, was granted 1,000 acres (4.0 km2) of land opposite Claisebrook. Camfield named the estate after his father's farm, Burrswood, near Groombridge in Kent. [2] [3]

The area was a low-lying peninsula leading to a ridge and steep, sandy hill with scrubland beyond. The peninsula became Burrswood Island in 1841 when Burswood canal was cut to offer a more direct route to Guildford, which had previously been encumbered by mud flats. By this time, the land was earning income and Camfield let it to tenants until he sold it in 1871 when he was living at Camfield House. A statue of Henry Camfield is located in Burswood Park surrounding the entertainment complex today.

During the 1890s, the Bunbury Bridge and the Perth to Armadale railway line were built in the area. The current spelling of Burswood was a result of a misspelling on the station signage. [4] Western Australia's first golf course (9-hole) was built at Burswood Island in 1895 – the clubhouse was a mud hut – and in 1899 a racecourse was also built. This was built by Albert Edmund Cockram and in 1902 it became the Belmont Park Racecourse. In 1906 Goodwood railway station, later renamed Belmont Park, opened. [5]

From 1900 until 1943 there were two racecourses, Goodwood and Belmont Park. These were owned by Albert Edmund Cockram as was Burswood Island. He developed the racecourses and became the largest importer of thoroughbreds into Australia. The Western Australian Turf Club took over both in 1945 purchasing it from the estate of Albert Edmund Cockram and closed Goodwood. [5]

Efforts were made to establish a residential district at "Riversdale Estate", but the use of Burswood Island as part of a sewerage filtration system (1906-1934) and the existence of various light industries from the 1910s onward worked against development. Residents in the area requested a change of name and in 1921, the name Rivervale was adopted. [6]

In 1985, the development of the Burswood Island Resort, including a casino, rehabilitated the name and the suburb was gazetted as Burswood in 1993, also including the residential area of Victoria Park south of Burswood Road.

Burswood is bounded by the Swan River to the west, north and north-east; Graham Farmer Freeway, Great Eastern Highway and the Armadale railway to the east, and Shepperton Road and Harper Street to the south. [7]

At the 2011 Australian census, Burswood had a population of 2,029 people living in 1,200 dwellings, many of which were townhouses or flats. Notably 8.8% of Burswood's population has Chinese ancestry, well above the state or national averages.

Burswood was the site of Western Australia's first and oldest golf course, established in 1895 and closed in 2013 amid controversy, to make way for construction of Perth Stadium and a new hotel. [11] The Burswood Superdome, a 13,600 seat multipurpose indoor arena used for sports and entertainment, operated from 1998 to 2012. It was demolished in 2013, to be replaced by a casino carpark. [12]

The Perth-Armadale rail line runs through the area and is serviced by Burswood railway station. Buses from the Victoria Park transfer station along Great Eastern Highway and Craig Street service the area. All services are operated by the Public Transport Authority. 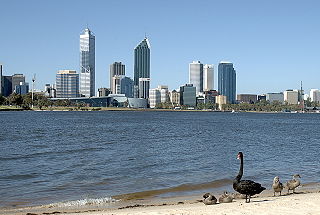 The Swan River is a river in the south west of Western Australia. Its Aboriginal Noongar name is the Derbarl Yerrigan. The river runs through the metropolitan area of Perth, Western Australia's capital and largest city. 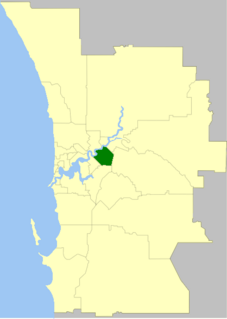 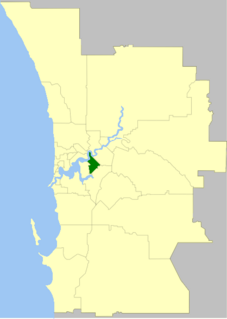 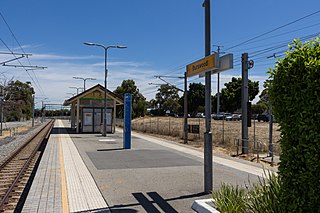 Burswood railway station is a railway station on the Transperth network. It is located on the Armadale line, 4.8 kilometres from Perth station serving the suburbs of Burswood, Lathlain and Rivervale.

Belmont Park railway station was located on the Armadale/Thornlie line in Perth, Western Australia. It was operated by Transperth serving Belmont Park Racecourse from 1906 until 2013.

Crown Perth is a resort and casino located in Burswood, Western Australia, near the Swan River. The resort consists of a casino, a convention centre with meeting rooms, theatre and two ballrooms along with 32 restaurants and bars, a nightclub and recreational facilities. It also features three hotels: the 405-room Crown Metropol Perth, the 291-room Crown Promenade Perth and the 500-room luxury hotel Crown Towers Perth, which was opened in December 2016. 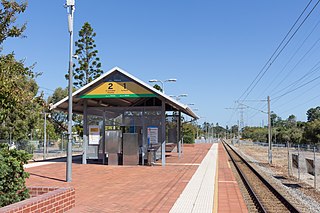 Carlisle is a suburb of Perth, Western Australia. Its local government area is the town of Victoria Park.

Lathlain is an inner south eastern suburb of Perth, Western Australia. Its local government area is the Town of Victoria Park. 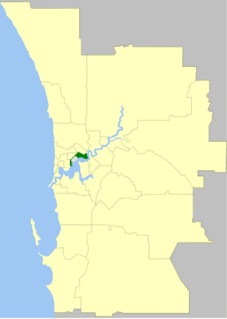 The City of Perth is a local government area and body, within the Perth metropolitan area, which is the capital of Western Australia. The local government is commonly known as Perth City Council. The City covers the Perth city centre and surrounding suburbs. The City covers an area of 20.01 square kilometres (8 sq mi) and had an estimated population of 21,092 as at 30 June 2015. On 1 July 2016 the City expanded, absorbing 1,247 residents from the City of Subiaco. The Perth City Council was suspended on 2 March 2018, pending the establishment of a public inquiry into the council, by Local Government Minister David Templeman. The council has been administered by three Commissioners since then.

Sport is an important part of the culture of Western Australia.

Belmont Park may refer to:

Bayswater is a suburb 6 kilometres (3.7 mi) north-east of the central business district of Perth, the capital of Western Australia. It is located north of the Swan River, within the City of Bayswater local government area. It predominantly a low density residential suburb with a small town centre lined with shops and a light industrial area to the east. Development in the suburb was first triggered by the construction of the Fremantle-Guildford railway line in 1881. In 1885, Bayswater estate was founded. Since then, the suburb has been almost fully developed, with a population of 14,432 as of 2016.

Belmont Park Racecourse is one of the two major horse racing venues within the Perth, Western Australia metropolitan area, the other being Ascot Racecourse, and is located just outside of the central business district on the Burswood Peninsular surrounded by the Swan River. The track has a circumference of 1,699 m (5,574 ft) with a 333 m (1,093 ft) straight. Belmont is Perth's winter racecourse, with fully enclosed facilities for spectators.

Perth Stadium, also known by naming rights sponsorship as Optus Stadium, is a multi-purpose stadium in Perth, Western Australia, located in the suburb of Burswood. It was completed in late 2017 and officially opened on 21 January 2018. The stadium has a capacity of over 60,000 people, making it the third-largest stadium in Australia. The stadium can be extended up to 65,000 seats for rectangular sports.

Dallas Reginald Dempster is an Australian businessman notable for original development of Perth's Burswood Resort and Casino and the proposed Kwinana Petrochemical Plant, both of which were among the Western Australian government transactions examined by the 1990–92 WA Inc Royal Commission. In November 2013 The West Australian newspaper named Dempster as one of Western Australia's 100 most influential business leaders (1829–2013).