The Cambridge University Botanic Garden is a botanical garden located in Cambridge, England, associated with the university Department of Plant Sciences (formerly Botany School). [2] [3] It lies between Trumpington Road to the west, Bateman Street to the north and Hills Road to the east.

The garden covers an area of 16 hectares (40 acres). [4] The site is almost entirely on level ground and in addition to its scientific value, the garden is highly rated by gardening enthusiasts. It holds a plant collection of over 8,000 plant species from all over the world to facilitate teaching and research. The garden was created for the University of Cambridge in 1831 by Professor John Stevens Henslow (Charles Darwin's mentor) and was opened to the public in 1846.

After several unsuccessful attempts during the 16th, 17th, and early 18th centuries, a University Botanic Garden was finally established at Cambridge between 1760 and 1763. This was not on the site of the present Garden, but in the centre of the town, on about 5 acres of land then occupied by 'The Mansion House' of the old Augustinian friary, and today by the New Museums Site and other university buildings. It was Dr. Richard Walker, Vice-Master of Trinity College, who, on the advice of Philip Miller of the Chelsea Physic Garden, purchased the property for £1,600, and presented it to the University for use as a Botanic Garden. For some years the Garden was known as the Walkerian Botanic Garden, and there is, at the present Garden, a Walkerian Society named in honour of its founder.

The Walkerian Garden was laid out and developed by the then professor of botany, Thomas Martyn. This small Garden was conceived as a typical Renaissance physic garden, inspired by the Chelsea Physic Garden in London. It grew herbaceous plants used in the teaching of medical students at the University. Glasshouses and a lecture room for the professor were built and the teaching of botany in Cambridge, which was then at a low ebb, received, for a time, a considerable stimulus. This improvement, however, did not last for long. Martyn left in 1798 and only visited Cambridge only occasionally until his death in 1825. About 1790 James Donn was appointed Curator and in 1796 he published the first edition of Hortus Cantabrigiensis, a list of the plants in the Garden which reached its 13th edition in 1845, long after Donn's death. [6]

In 1825 John Stevens Henslow, Charles Darwin's teacher at Cambridge, succeeded Martyn as professor of botany and soon realized that a larger site, farther from the centre of Cambridge, was desirable for the Botanic Garden. In 1831 the University purchased the present site of about 40 acres to the south of the town on the Trumpington Road, and in 1846 the first tree was planted. It had been the intention to lay out the whole 40 acres as a Botanic Garden, but presumably funds were lacking, and in fact only 20 acres were planted, the remainder being let out as allotments.

The planning of the new Garden was carried out by Professor Henslow, assisted by young Cardale Babington. [7] The land was flat and unpromising as a garden site, but the layout was planned with great skill, utilizing an old gravel pit to construct a lake with a high mound running into it. Trees and shrubs were planted according to their botanical sequence, a range of glasshouses was built in the 1860s, and a rock garden, one of the earliest of its kind in the country, was constructed about the same time. The Garden has also long been known for its many fine specimens of rare trees. By the 1870s the main features of the Garden had been developed and, it was ready to play its part in the great expansion of botanical teaching and research that was about to take place at Cambridge. During the early years of the 20th century much of the pioneer work of William Bateson, Charles Chamberlain Hurst, and Edith Rebecca Saunders on plant genetics was carried out at the Garden, and it was later used for researches on plant physiology by Frederick Blackman and George Edward Briggs, and on plant pathology by Frederick Tom Brooks and others. [6]

Between 1954 and February 2022 the Botanic Garden was home to the Isaac Newton tree. [9] The tree was a Flower of Kent grown from a cutting of the tree that dropped the apple that Newton claimed inspired him to produce his theory of gravity. [9] [10] The tree was blown down in Storm Eunice. [9]

The chair of Botany at Cambridge was created in 1724 for Richard Bradley (1724–1732), and as of 2016, fifteen botanists have held that position, including John Martyn (1733–1762), John Stevens Henslow (1825–1861) and Harry Marshall Ward (1895–1906) (see list ). In 1991 the Botany School was renamed the Department of Plant Sciences. In 2005 the title was changed to Regius Professor of Botany, the appointment as of 2016 is that of Professor Sir David Baulcombe. The current Plant Sciences building on the Downing Site was constructed in 1904 during Ward's tenure, when the main areas of research were morphology, systematics, pathology and physiology. Morphologists in that period included Agnes Arber, John Corner, and Kenneth Sporne, whose phylogenetic approach was well ahead of the seminal work of Willi Hennig. [11]

In 1921 the University appointed H. Gilbert-Carter as the first scientific Director of the Garden, in conjunction with the curatorship of the herbarium and who published the first guide to the garden. [12] Amongst other directors of the garden were John Gilmour (1951–1973), and Max Walters (1973–1983) who published a history of the garden in 1981. [13] The current director is Beverley Glover (2013–) (see list ). [14]

The newly built Sainsbury Laboratory Cambridge University (SLCU) in the grounds of the garden is a highly collaborative and interdisciplinary new research institute. Focusing on the regulatory systems underlying plant growth and development, the Lab uses cutting edge scientific resources and predictive computational models to further understand of the dynamic, self-organising properties of plants. It was funded by Lord Sainsbury, chancellor of the university, and opened by Queen Elizabeth II in April 2011. It houses the university herbarium, moved from the Downing Site in 2011. [15] [16]

Cory Lodge was built in 1924-5 with money given to the University by Reginald Cory, an alumnus of Trinity College, Cambridge and was originally used as the residence of the Director of the Botanic Garden. Adjacent to Cory Lodge is a superb specimen of Catalpa speciosa , an Indian bean tree from North America, with white flowers followed by long slender fruits. On the north wall of the house is a specimen of Ginkgo biloba , the Chinese maidenhair tree, trained as an espalier since 1987.

The Chelsea Physic Garden was established as the Apothecaries' Garden in London, England, in 1673 by the Worshipful Society of Apothecaries to grow plants to be used as medicines. This four acre physic garden, the term here referring to the science of healing, is among the oldest botanical gardens in Britain, after the University of Oxford Botanic Garden. Its rock garden is the oldest in Europe devoted to alpine plants and Mediterranean plants. The largest fruiting olive tree in Britain is there, protected by the garden's heat-trapping high brick walls, along with what is doubtless the world's northernmost grapefruit growing outdoors. Jealously guarded during the tenure of the Worshipful Society of Apothecaries, the Garden became in 1983 a registered charity and was opened to the general public for the first time.

The Department of Plant Sciences is a department of the University of Cambridge that conducts research and teaching in plant sciences. It was established in 1904, although the university has had a professor of botany since 1724.

The Royal Botanic Garden Edinburgh (RBGE) is a scientific centre for the study of plants, their diversity and conservation, as well as a popular tourist attraction. Founded in 1670 as a physic garden to grow medicinal plants, today it occupies four sites across Scotland—Edinburgh, Dawyck, Logan and Benmore—each with its own specialist collection. The RBGE's living collection consists of more than 13,302 plant species, whilst the herbarium contains in excess of 3 million preserved specimens.

The University of Oxford Botanic Garden is the oldest botanic garden in Great Britain and one of the oldest scientific gardens in the world. The garden was founded in 1621 as a physic garden growing plants for medicinal research. Today it contains over 5,000 different plant species on 1.8 ha. It is one of the most diverse yet compact collections of plants in the world and includes representatives from over 90% of the higher plant families.

Stuart Max Walters was a British botanist and academic. As a conscientious objector in the Second World War, he worked as a hospital orderly in Sheffield and Bristol. He was Curator of the Herbarium, Botany School, University of Cambridge 1949–73, Lecturer in Botany 1962–73, and for the ten years up until his retirement, 1973–83, Director of the University Botanic Garden in Cambridge, of which he wrote a history. He was a Research Fellow at St John's College, Cambridge 1948-51 and Fellow of King's College, Cambridge 1964–84.

Glasgow Botanic Gardens is a botanical garden located in the West End of Glasgow, Scotland. It features several glasshouses, the most notable of which is the Kibble Palace. 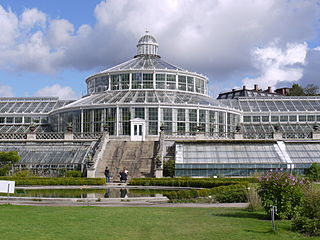 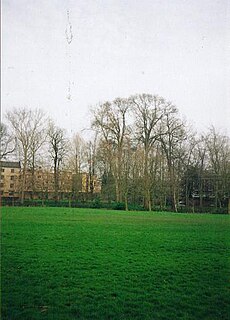 The hybrid cultivar Ulmus × hollandica 'Cicestria', commonly known as the 'Chichester Elm', was cloned at the beginning of the 18th century from a tree growing at Chichester Hall, Rawreth, near Danbury, Essex, England, then the home of Thomas Holt White FRS, brother of the naturalist Gilbert White. The tree was first recorded by country parson and botanist Adam Buddle in south-east Essex in 1711. 'Cicestria' is the original Ulmus × hollandica 'Vegeta', but suffered confusion with the later Huntingdon Elm cultivar by John Claudius Loudon who, without consulting Lindley, accorded the epithet 'Vegeta' to Huntingdon Elm in 1838, as he found the two indistinguishable. Chichester Elm appeared as U. cicestria in an 1801 catalogue.

Mark Wayne Chase is a US-born British botanist. He is noted for work in plant classification and evolution, and one of the instigators of the Angiosperm Phylogeny Group-classification for flowering plants which is partly based on DNA studies. In particular he has researched orchids, and currently investigates ploidy and hybridization in Nicotiana. 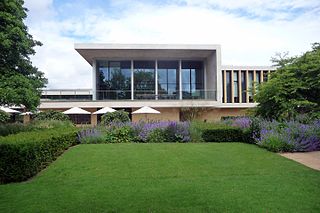 George Henslow was an Anglican curate, botanist and author. Henslow was notable for being a defender of Lamarckian evolution.

Edward Martyn Rix is a British botanist, collector, horticulturalist and author. Following completion of a PhD on Fritillaria at Cambridge University, he worked in Zurich, Switzerland and at the Royal Horticultural Society gardens at Wisley. He is the author of many books and articles on plants and horticulture and is the editor of Curtis's Botanical Magazine, based at the Royal Botanic Gardens, Kew in London.