In mathematics, combinatorial topology was an older name for algebraic topology, dating from the time when topological invariants of spaces (for example the Betti numbers) were regarded as derived from combinatorial decompositions of spaces, such as decomposition into simplicial complexes. After the proof of the simplicial approximation theorem this approach provided rigour.

The change of name reflected the move to organise topological classes such as cycles-modulo-boundaries explicitly into abelian groups. This point of view is often attributed to Emmy Noether, [1] and so the change of title may reflect her influence. The transition is also attributed to the work of Heinz Hopf, [2] who was influenced by Noether, and to Leopold Vietoris and Walther Mayer, who independently defined homology. [3]

A fairly precise date can be supplied in the internal notes of the Bourbaki group. While topology was still combinatorial in 1942, it had become algebraic by 1944. [4]

Azriel Rosenfeld (1973) proposed digital topology for a type of image processing that can be considered as a new development of combinatorial topology. The digital forms of the Euler characteristic theorem and the Gauss–Bonnet theorem were obtained by Li Chen and Yongwu Rong. [5] [6] A 2D grid cell topology already appeared in the Alexandrov–Hopf book Topologie I (1935). 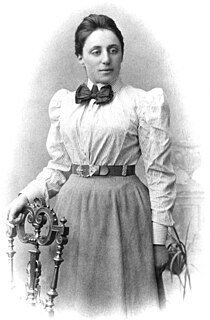 Amalie Emmy Noether was a German mathematician who made many important contributions to abstract algebra. She discovered Noether's theorem, which is fundamental in mathematical physics. She invariably used the name "Emmy Noether" in her life and publications. She was described by Pavel Alexandrov, Albert Einstein, Jean Dieudonné, Hermann Weyl and Norbert Wiener as the most important woman in the history of mathematics. As one of the leading mathematicians of her time, she developed some theories of rings, fields, and algebras. In physics, Noether's theorem explains the connection between symmetry and conservation laws.

In algebraic topology, the Betti numbers are used to distinguish topological spaces based on the connectivity of n-dimensional simplicial complexes. For the most reasonable finite-dimensional spaces, the sequence of Betti numbers is 0 from some point onward, and they are all finite.

In mathematics, the simplicial approximation theorem is a foundational result for algebraic topology, guaranteeing that continuous mappings can be approximated by ones that are piecewise of the simplest kind. It applies to mappings between spaces that are built up from simplices—that is, finite simplicial complexes. The general continuous mapping between such spaces can be represented approximately by the type of mapping that is (affine-) linear on each simplex into another simplex, at the cost (i) of sufficient barycentric subdivision of the simplices of the domain, and (ii) replacement of the actual mapping by a homotopic one.

In algebraic topology, a homology sphere is an n-manifold X having the homology groups of an n-sphere, for some integer . That is,

In mathematics, an H-space, or a topological unital magma, is a topological space X together with a continuous map μ : X × X → X with an identity element e such that μ(e, x) = μ(x, e) = x for all x in X. Alternatively, the maps μ(e, x) and μ(x, e) are sometimes only required to be homotopic to the identity, sometimes through basepoint preserving maps. These three definitions are in fact equivalent for H-spaces that are CW complexes. Every topological group is an H-space; however, in the general case, as compared to a topological group, H-spaces may lack associativity and inverses.

In mathematics, Alexander duality refers to a duality theory presaged by a result of 1915 by J. W. Alexander, and subsequently further developed, particularly by Pavel Alexandrov and Lev Pontryagin. It applies to the homology theory properties of the complement of a subspace X in Euclidean space, a sphere, or other manifold. It is generalized by Spanier–Whitehead duality.

In applied mathematics, topological data analysis (TDA) is an approach to the analysis of datasets using techniques from topology. Extraction of information from datasets that are high-dimensional, incomplete and noisy is generally challenging. TDA provides a general framework to analyze such data in a manner that is insensitive to the particular metric chosen and provides dimensionality reduction and robustness to noise. Beyond this, it inherits functoriality, a fundamental concept of modern mathematics, from its topological nature, which allows it to adapt to new mathematical tools.

In the mathematical field of low-dimensional topology, a clasper is a surface in a 3-manifold on which surgery can be performed.

In mathematics, an abstract cell complex is an abstract set with Alexandrov topology in which a non-negative integer number called dimension is assigned to each point. The complex is called “abstract” since its points, which are called “cells”, are not subsets of a Hausdorff space as it is the case in Euclidean and CW complex. Abstract cell complexes play an important role in image analysis and computer graphics.