The state sought to justify the search of a car owned by Edward Coolidge, suspected of killing 14-year-old Pamela Mason in January 1964, on three theories: automobile exception, search incident to arrest, and plain view.

14-year-old Pamela Mason of Manchester, New Hampshire placed an ad in the window of a local merchant offering to babysit. On January 13, 1964, she was picked up by a man who had called her, saying that he needed a babysitter. He picked her up to take her to the alleged babysitting location but she was never seen again. Eight days later, Mason was found stabbed and shot to death in a snowbank near Manchester, New Hampshire. The state Attorney General took charge of police activities relating to the murder. When the police applied for a warrant to search suspect Coolidge's automobile, the Attorney General, acting as a justice of the peace, authorized it. Additionally, local police had taken items from Coolidge's home during the course of an interview with the suspect's wife. Coolidge was found guilty and sentenced to life imprisonment.

In a decision in which a number of justices chose to concur in part and dissent in part, the Court held that the searches and seizures of Coolidge's property were unconstitutional. Justice Stewart's opinion held that the warrant authorizing the seizure of Coolidge's automobile was invalid because it was not issued by a "neutral and detached magistrate." Justice Stewart also rejected New Hampshire's arguments in favor of making an exception to the warrant requirement. Justice Stewart held that neither the "incident to arrest" doctrine nor the "plain view" doctrine justified the search, and that an "automobile exception" was inapplicable. The Court noted that although the "automobile exception" exists, "the word 'automobile' is not a talisman in whose presence the fourth amendment fades away and disappears...".

Coolidge was released from prison in 1991[ why? ] maintains his innocence in Mason's murder and the other murders he was suspected in. [1] 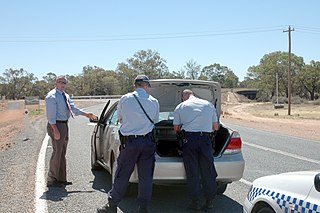 Search and seizure is a procedure used in many civil law and common law legal systems by which police or other authorities and their agents, who, suspecting that a crime has been committed, commence a search of a person's property and confiscate any relevant evidence found in connection to the crime.

Stanley v. Georgia, 394 U.S. 557 (1969), was a United States Supreme Court decision that helped to establish an implied "right to privacy" in U.S. law, in the form of mere possession of obscene materials.

Chimel v. California, 395 U.S. 752 (1969), is a 1969 Supreme Court of the United States case. In Chimel, the Court held that police officers arresting a person at home could not search the entire home without a search warrant, but police may search the area within immediate reach of the person. The rule on searches incident to a lawful arrest within the home is now known as the Chimel Rule.

South Dakota v. Opperman, 428 U.S. 364 (1976), elaborated on the community caretaking doctrine. Under the Fourth Amendment, "unreasonable" searches and seizures are forbidden. In addition to their law-enforcement duties, the police must engage in what the court has termed a community caretaking role, including such duties as removing obstructions from roadways to ensure the free flow of traffic. When the police act in this role, they may inventory cars they have seized without "unreasonably" searching those cars.

Payton v. New York, 445 U.S. 573 (1980), was a United States Supreme Court case concerning warrantless entry into a private home in order to make a felony arrest. The Court struck down a New York statute providing for such warrantless entries because the Fourth Amendment draws a firm line at the entrance to the house. Absent exigent circumstances, that threshold may not be reasonably crossed without a warrant. The court, however, did specify that an arrest warrant would have sufficed for entry into the suspect's residence if there had been reason to believe that the suspect was within the home.

Welsh v. Wisconsin, 466 U.S. 740 (1984), was a 1983 case before the US Supreme Court determining whether a warrantless arrest violates the Fourth Amendment protection against unlawful search and seizure.

Minnesota v. Dickerson, 508 U.S. 366 (1993), was a decision by the Supreme Court of the United States. The Court unanimously held that, when a police officer who is conducting a lawful patdown search for weapons feels something that plainly is contraband, the object may be seized even though it is not a weapon. By a 6-to-3 vote, however, the court held that the officer in this case had gone beyond the limits of a lawful patdown search before he could determine that the object was contraband, making the search and the subsequent seizure unlawful under the Fourth Amendment.

Chambers v. Maroney, 399 U.S. 42 (1970), was a United States Supreme Court case in which the Court applied the Carroll doctrine in a case with a significant factual difference—the search took place after the vehicle was moved to the stationhouse. The search was thus delayed and did not take place on the highway as in Carroll. After a gas station robbery, a vehicle fitting the description of the robbers' car was stopped. Inside were people wearing clothing matching the description of that worn by the robbers. They were arrested, and the car was taken to the police station where it was later searched.

California v. Carney, 471 U.S. 386 (1985), was a United States Supreme Court case which held that a motor home was subject to the automobile exception to the search warrant requirement of the Fourth Amendment to the United States Constitution because the motor home was readily movable.

Horton v. California, 496 U.S. 128 (1990), was a United States Supreme Court case in which the Court held that the Fourth Amendment does not prohibit the warrantless seizure of evidence which is in plain view. The discovery of the evidence does not have to be inadvertent, although that is a characteristic of most legitimate plain-view seizures. The opinion clarified the plain view doctrine of the Court's Fourth Amendment analysis.

Cupp v. Murphy, 412 U.S. 291 (1973), was a United States Supreme Court case in which the Court upheld a murder conviction notwithstanding a challenge that the evidence upon which guilt was based was obtained in violation of the Fourth and Fourteenth Amendments of the United States Constitution. The court held that in view of the station-house detention upon probable cause, the very limited intrusion of scraping the defendant's fingernails for blood and other material, undertaken to preserve highly evanescent evidence, did not violate the Fourth and Fourteenth Amendments.

Stoner v. California, 376 U.S. 483 (1964), is a United States Supreme Court decision involving the Fourth Amendment. It was a criminal case appealed from the California Courts of Appeal after the California Supreme Court denied review. The case extended the situations under which search warrants are required as they reversed a robbery conviction made on the basis of evidence obtained in violation of the holding.

United States v. Watson, 423 U.S. 411 (1976), was a case decided by the Supreme Court of the United States that decided that a warrantless arrest in public and consenting to a vehicle search did not violate the Fourth Amendment.

Birchfield v. North Dakota, 579 U.S. ___ (2016), was a case in which the Supreme Court of the United States held that the search incident to arrest doctrine permits law enforcement to conduct warrantless breath tests but not blood tests on suspected drunk drivers.