Thornton v. United States, 541 U.S. 615 (2004), was a decision by the United States Supreme Court, which held that when a police officer makes a lawful custodial arrest of an automobile's occupant, the Fourth Amendment to the United States Constitution allows the officer to search the vehicle's passenger compartment as a contemporaneous incident of arrest. [1] Thornton extended New York v. Belton , ruling that it governs even when an officer does not make contact until the person arrested has left the vehicle. Thornton also suggests a separate justification for an evidentiary search "when it is reasonable to believe evidence relevant to the crime of arrest might be found in the vehicle." [2]

New York v. Belton, 453 U.S. 454 (1981), was a United States Supreme Court case in which the Court held that when a police officer has made a lawful custodial arrest of the occupant of an automobile, the officer may, as a contemporaneous incident of that arrest, search the passenger compartment of that automobile. Therefore, Belton extended the so-called "Chimel rule" of searches incident to a lawful arrest, established in Chimel v. California (1969), to vehicles. The Supreme Court sought to establish bright line rules to govern vehicle search incident to eliminate some confusion in the cases.

Thornton and Belton were distinguished by Arizona v. Gant , [3] which restricted searches incident to arrest to circumstance where: 1) it is reasonable to believe that the arrested individual might access the vehicle at the time of the search; or 2) it is reasonable to believe that arrested individual's vehicle contains evidence of the offense that led to the arrest; or 3) the officer has probable cause to believe that there may be evidence of a crime concealed within the vehicle. Thus, while Arizona v. Gant modifies the search incident to arrest doctrine, it also leaves intact certain legal justifications for warrantless searches set forth in Chimel v. California , [4] Thornton, and United States v. Ross . [5]

Arizona v. Gant, 556 U.S. 332 (2009), was a United States Supreme Court decision holding that the Fourth Amendment to the United States Constitution requires law enforcement officers to demonstrate an actual and continuing threat to their safety posed by an arrestee, or a need to preserve evidence related to the crime of arrest from tampering by the arrestee, in order to justify a warrantless vehicular search incident to arrest conducted after the vehicle's recent occupants have been arrested and secured.

Chimel v. California, 395 U.S. 752 (1969), is a 1969 Supreme Court of the United States case. In Chimel, the Court held that police officers arresting a person at home could not search the entire home without a search warrant, but police may search the area within immediate reach of the person.

A search warrant is a court order that a magistrate or judge issues to authorize law enforcement officers to conduct a search of a person, location, or vehicle for evidence of a crime and to confiscate any evidence they find. In most countries, a search warrant cannot be issued in aid of civil process.

Terry v. Ohio, 392 U.S. 1 (1968), was a landmark decision of the Supreme Court of the United States in which the Court ruled that the Fourth Amendment's prohibition on unreasonable searches and seizures is not violated when a police officer stops a suspect on the street and frisks him or her without probable cause to arrest, if the police officer has a reasonable suspicion that the person has committed, is committing, or is about to commit a crime and has a reasonable belief that the person "may be armed and presently dangerous." 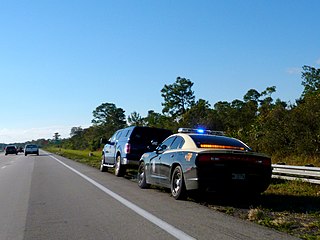 A traffic stop, commonly called being pulled over, is a temporary detention of a driver of a vehicle by police to investigate a possible crime or minor violation of law.

Atwater v. Lago Vista, 532 U.S. 318 (2001), was a United States Supreme Court decision which held that a person's Fourth Amendment rights are not violated when the subject is arrested for driving without a seatbelt. The court ruled that such an arrest for a misdemeanor that is punishable only by a fine does not constitute an unreasonable seizure under the Fourth Amendment.

Search incident to a lawful arrest, commonly known as search incident to arrest (SITA) or the Chimel rule, is a legal principle that allows police to perform a warrantless search of an arrested person, and the area within the arrestee’s immediate control, in the interest of officer safety, the prevention of escape, and the destruction of evidence.

Ker v. California, 374 U.S. 23 (1963), was a case before the United States Supreme Court, which incorporated the Fourth Amendment's protections against illegal search and seizure. The case was decided on June 10, 1963, by a vote of 5-4.

California v. Acevedo, 500 U.S. 565 (1991), was a decision of the United States Supreme Court, which interpreted the Carroll doctrine to provide one rule to govern all automobile searches. The Court stated, "The police may search an automobile and the containers within it where they have probable cause to believe contraband or evidence is contained." The decision also overruled the distinctions in United States v. Chadwick (1977) and Arkansas v. Sanders (1979) which had previously held that, if probable cause existed to search an automobile, the police may perform a warrantless search of the automobile and the containers within it, but if the police only had probable cause to search a container in the automobile, the police first had to obtain a warrant before searching the container.

Whren v. United States, 517 U.S. 806 (1996), was a unanimous United States Supreme Court decision that "declared that any traffic offense committed by a driver was a legitimate legal basis for a stop."

United States v. Robinson, 414 U.S. 218 (1973), was a case in which the United States Supreme Court held that "in the case of a lawful custodial arrest a full search of the person is not only an exception to the warrant requirement of the Fourth Amendment, but is also a reasonable search under that Amendment."

Maryland v. Buie, 494 U.S. 325 (1990), was a decision by the Supreme Court of the United States handed down in 1990. In the case, the Court held that the Fourth Amendment permits a properly limited protective sweep in conjunction with an in-home arrest when the searching officer possesses a reasonable belief based on specific and articulable facts that the area to be swept harbors an individual posing a danger to those on the arrest scene.

Cupp v. Murphy, 412 U.S. 291 (1973), was a United States Supreme Court case in which the Court upheld a murder conviction notwithstanding a challenge that the evidence upon which guilt was based was obtained in violation of the Fourth and Fourteenth Amendments of the United States Constitution. The court held that in view of the station-house detention upon probable cause, the very limited intrusion of scraping the defendant's fingernails for blood and other material, undertaken to preserve highly evanescent evidence, did not violate the Fourth and Fourteenth Amendments.

Florida v. Thomas, 532 U.S. 774 (2001), was a United States Supreme Court case decided in 2001. The case brought to the court concerned the extent of the Court's earlier decision in New York v. Belton, concerning whether a person was in custody, a determination central to allowing evidence seized in an automobile search to be presented in trial. However, the Court unanimously dismissed the case because the decision of the Florida state courts was not "final".

Pennsylvania v. Mimms, 434 U.S. 106 (1977), is a United States Supreme Court criminal law decision holding that a police officer ordering a person out of a car following a traffic stop and conducting a pat-down to check for weapons did not violate the Fourth Amendment to the United States Constitution.

Riley v. California, 573 U.S. ___ (2014), is a landmark United States Supreme Court case in which the Court unanimously held that the warrantless search and seizure of digital contents of a cell phone during an arrest is unconstitutional.